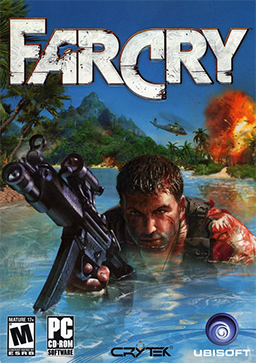 It’s been 10 years since Far Cry‘s release and we look at how it holds up today.

There are a lot of things that I could complain about in Far Cry. In fact, going over my notes, the list of pros is much shorter than the list of cons. The thing is, whereas my longer list of bad bits includes stuff like “limited enemy types,” “bad save system” and “mediocre story,” my short list of positives can pretty much be summed up as “holy crap, this game is fun!”

Far Cry, for the unfamiliar, follows the adventures of Jack Carver, a former special forces operative in the wrong place at the wrong time fighting a one man war against an army of mercenaries and genetically engineered yada yada. It’s pretty schlocky stuff and the story’s execution could best be compared to a bad 80’s action flick. That being the case, it capably does the job of providing a reason for all the ensuing mayhem, which is actually fine because the gameplay more than makes up for any lack of depth in its narrative.

It’s funny because, at first glance, it doesn’t seem like Far Cry is anything special. It’s a pretty looking title, for sure. In fact, I was legitimately surprised to find myself frequently impressed at how lovely its environments remain even at the ripe old age of 10. Beyond that though, it really does seem like a pretty standard shooter when you first start off. It’s only after you’ve been playing for a little while that you start to realize that the real beauty of Far Cry lies in the subtle freedoms that it gives the player.

For instance, early in the game you’re tasked with stealing a vehicle from a mercenary camp. My first attempts involved me trying to go with my usual strategy of charging in guns-blazing. Six or seven deaths later however, I finally got tired of failure and decided to look around a bit. The area wasn’t gigantic, but the camp was buttressed by a hill full of brush and trees with a deep river running alongside it. Struck with an idea, I hopped into the water, swam across to the hill, and skirted around the camp until I was literally within sprinting distance of my objective. There weren’t any markers or tutorials telling me to do this, but the game gave me the breathing room to try different routes and tactics and, in turn, I was able to completely circumvent a difficult firefight. Or, at least, I would have if I hadn’t insisted on shooting the place up any way (I’m a tad bloodthirsty in games).

Now granted, not every area features that much openness. It isn’t like ArmA: Cold War Assault, for example, where you’re given an entire countryside to trot around and leverage toward your goals. In fact, you’ll find yourself more than once on a set path or inside indoor areas where there’s only one way to go. Even then, however, the game still usually tries to include some modicum of choice. Sometimes this amounts to a jungle path being shouldered by strips of deep grass you can conceal yourself in. Other times, you’ll enter a room and find yourself confronted with a bevy of options for dispatching your foes.

At one point, for instance, I walked into a room to discover a pair of mercenaries standing underneath a cargo bin dangling by a flimsy chain from the ceiling. Then, in another corner of the room, I saw one of the game’s mutants (or Trigens as they’re referred to) drop down from a hole in the wall. If I wanted to, I could shoot out the chain and crush the mercenaries, let them get into a fight with my new best friend Mr. Mutant, or just go crazy with my assault rifle and kill everyone myself. I wound up going with option number three (as I said, bloodthirsty), but the mere fact that I got to decide was a joy in itself.

Even if Far Cry had omitted all of this choice, it would still have a lot going for it. In fact, the core gameplay is so good that it pretty much counters every negative thing I could possibly say about it. Take the whole “limited enemy types” bit I briefly mentioned at the beginning of this review. You’ll consistently fight the same enemies for the duration of the game. Whereas this wound up being an issue for me in Shogo however, Far Cry makes it work with some very decent AI that does a great job of keeping you on your toes.

In fact, whether you’re fighting an armor wearing, rifle-toting mercenary or a speedy, clawed genetic monster, you can almost always count on both to respond intelligently to your actions. They’ll flank you, seek cover, and use their environment and the tools around them to their advantage. If a human foe sees a vehicle or empty gun emplacement, they’ll run to use them. If you make the mistake of running into a wooden building, they’ll blast you through its flimsy walls. I was frequently surprised by my foes, to the point that I almost didn’t mind dying at times because it meant I’d get to fight the same battle over again and see how they’d respond the next time through.

If I was going to settle on an actual, concrete flaw for Far Cry, it would be its save system or, rather, its lack of one. Whereas every other shooter I’ve played this month has included at least some rudimentary save options, Far Cry relies on automated checkpoints. Now don’t get me wrong, I like checkpoints. Checkpoints, particularly when they’re handled well, can be especially useful for forgetful folk like me who sometimes neglect to save as often as they should. That said, it bothers me when they’re my only option. I like being able to pick a point and say “if I die I want to start back here.”

That in mind, I have to admit that Far Cry‘s lack of manual saving never bothered me as much as I’d worried. While there was the occasional spot where checkpoints seemed too far apart, the game usually did a good job of spacing them out so that a death didn’t cost me too much progress. Again, I would have preferred more direct control in this area, but it ultimately wasn’t as troublesome as I’d feared and I can’t, in good conscience, consider it a strong mark against the game.

My only real, irredeemable disappointment with Far Cry was its multiplayer. Granted, at this point its online community (at least as I experienced) is practically nonexistent. That said, the hoops that I had to jump through to get to it were a tad on the annoying side. Put shortly, Ubisoft’s security measures require the use of a CD Key. Looking through the documentation provided by GOG however, I couldn’t find one. I checked around and discovered that the GOG version doesn’t actually come with one and that you need to contact the site’s support to have it sent to you. In the end the few extra days I had to wait weren’t all that much of a hardship. Even so, if a CD Key is a necessary part of the game, then I kind of feel like it should have been included as a standard part of the product.

That stumble aside, Far Cry is easily one of the most entertaining shooters I’ve played this month and well worth the $9.99 that GOG’s asking for it. Its narrative might be about as memorable as a bad romantic comedy, but it’s a masterpiece of pure gameplay that delivers thrilling firefights that are dynamic and highly replayable. Put simply, if you like shooters, you owe it to yourself to play Far Cry.

We end first person shooter month next week with the Clive Barker’s Undying.