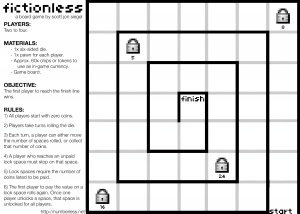 The first player to reach the finish line wins.

All players place their pawns on the start space to begin. At the start of the game, all players have zero coins. The player with the closest birthday will go first.

During their turn, players will roll the die, and then make one of two choices:

A player can only choose one of these two options each turn. Therefore, if a player chooses to collect coins, that player does not move that turn.

To win, a player must land exactly on the “finish” space. For example, if a player is three spaces from the finish, and rolls a five, that player can not move that turn.

Lock spaces are marked with an image of a lock, and a numerical value. In order to pass a lock space, one player has to pay a number of coins equal to the value on the space.

Once one player unlocks a space, that space is unlocked for all players.

Concept:
A bit stuck for game concepts this month, I decided to try blending classic mechanics together in an attempt to create something new. After a few lackluster ideas, I came up with the concept of placing monetary value on movement in a standard “roll to move” board game (an idea largely inspired by the “money as life-meter” mechanic in Tingle’s Rosy Rupeeland on the DS). I liked the idea of players rolling the dice and being unsure of whether they should move the number of spaces or sell the roll to make a profit. I opted to start there, and see where it took me.

Design:
If, like most generic board games, the objective was to “reach the finish line,” I needed to devise a reason for players to sell their rolls instead of simply moving closer to the finish. The most logical solution was to place barriers in the way of the players’ progress, and demand that players pay tolls in order to proceed. This way, in order to pay off the next goal, players cannot just rush forward, but are forced to save up money and take the game at a slower pace.

I originally also wanted to include a bidding element to the game, partly inspired by Yehuda Berlinger’s “It’s Alive!” which I recently reviewed. The problem, however, was building incentive into buying a roll from another player. Playtesting revealed that bidding was never worthwhile to a player, since players needed their money for tolls, and specific numbers were never more valuable than others. Rather than building this into the game, I scrapped the mechanic for the sake of simplicity.

Values such as the tolls and the number of spaces on the board had to be tweaked and balanced repeatedly. Balancing is still one of my weakest points as a designer, but working with the straight-forward values in this game simplified the task and made for good experience.

I had more trouble than I expected with the name of the game, because the game lacks any sort of plot or fiction. Ultimately, “Fictionless” felt like an apt description of the game, if not the gameplay.

Result:
Fictionless continues a trend of non-strategic games that I seem to be stuck in at the moment. Still, the board game appears less random due to the choices made by the players each turn, and the system of locks creates interesting opportunities for lagging players to catch up towards the end.

There are definitely opportunities to improve upon the game and implement elements that decrease randomness and increase strategy. I’ll revisit this same game next month and when I do, Fictionless will be fictionless no longer.