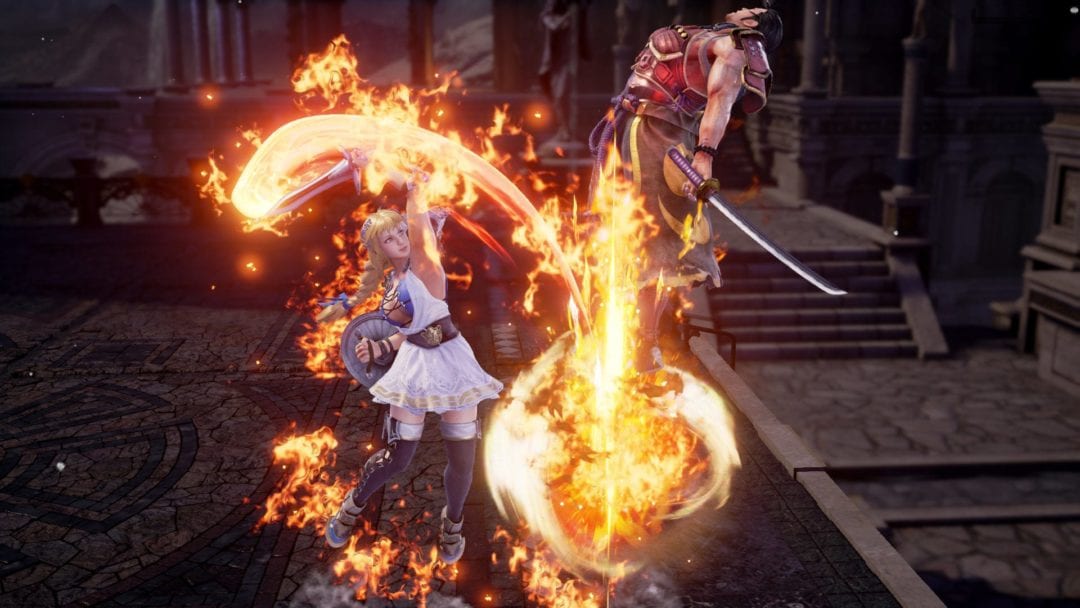 Street Fighter II wasn’t the first fighting game, but it’s remained the standard, setting up a formula where a collection of fighters with various backgrounds and abilities square off to become the best. Three decades later, developers are still struggling to evolve that model, and most misunderstand what modern audiences find meaningful about the genre. It’s time to stop playing safe. Fighting games must prioritize rich stories and customization, particularly cosmetic options, if the genre is going to survive.

Considering they’re full of distinctive characters, it’s surprising that most fighting game story modes are nothing more than poor visual novels. Bandai Namco’s SoulCalibur VI, which was reviewed favorably, has two such story modes. Libra of Soul let’s you create a custom fighter and take them on a journey to stop evil that’s explained through endless lines of texts separated by flavorless combat scenarios. During a particular fight your speed may be handicapped or the AI could be powered up but the enemies are indistinguishable from each other. Soul Chronicle follows the core SoulCalibur cast through short stories expanding on the origins of the titular sword, but even these are told through text-heavy scrawls between brief fights.

SoulCalibur VI’s shortcomings aren’t isolated either. Many games in the genre employ this storytelling technique. Dragon Ball FighterZ, also published by Bandai Namco, is guilty of of committing the same mistakes. Series favorite characters go through an uneventful story mode littered with indistinguishable combat scenarios. There is a balance that needs to be achieved between an enjoyable story and actual fighting mechanics. Guilty Gear Xrd went too far in the other direction, creating a story that lacked combat at all. Marvel Vs. Capcom: Infinite decided it needed a story mode to explain how these characters would team up, but the writing was miserable.

The secret to making a truly great story mode is balancing entertaining plot with the ability to experiment in the fighting engine. Learning the basics isn’t enough. In order to compete online or even comfortably with friends, players must achieve some level of mastery. Allowing more difficulty variations in story mode rather than just putting players through a gauntlet of weak fighters before a headache-inducing end fight would go a long way to fostering that kind of skill development.

Even beyond story, though, players need tangible rewards for playing. The greatest video game successes of this decade, regardless of genre, recognize the value of character customization. Fortnite owes its huge audience in part to fashionable unlockable accessories. PlayerUnknown’s Battlegrounds also owes much of its success to enthusiasm for character outfits and has collaborated with other significant properties expand options like when it partnered with DC Comics on Suicide Squad-based skins. Gamers want to showcase their personalities and show off rare items that emphasize their skill at the game.

Fighting games rarely include rich cosmetic options for characters, and those that do can come with their own issues. SoulCalibur VI failed to include alternate costumes for playable characters, something even the PlayStation original had. Bandai Namco suggested people use the game’s character customization system to style their own characters, but that doesn’t justify why there aren’t even color variations for character outfits. Street Fighter V, meanwhile, has loot boxes and cosmetic items like costumes. These cost an unreasonably high amount of Fight Money, the game’s currency, and the game doesn’t didn’t provide a clear or pleasurable way to earn it, just encouraging players to buy it by spending large amounts of real money. Compounding the problem is the fact that Fight Money can be lost in combat. Fighting games could learn from  Fortnite’s approach with the Battle Pass. Available for a one-time fee, the Pass unlocks new challenges and customization unlocks. This is the sort of reward model that would translate well to SoulCalibur, Street Fighter, and all fighting games.

NetherRealm Studios seems to be the only fighting game maker that understands customization and story. Mortal Kombat and Injustice, the team’s two signature fighting series, offer far more content for your dollar and time. Since Mortal Kombat in 2011, NetherRealm fighting games have gained a reputation for excellent story modes. They feature cinematics where characters such as Batman, Superman, and Wonder Woman square off against each other, and the game provides a narrative that brings newcomers into the game world and helps them get to know the characters. Injustice 2 took storytelling even further, adding in branching narrative paths that bring variety to the end game. Chapter points made it easy for players to go back and experience anything they might have missed. Instantly getting to repeat your favorite part of the story allows flexibility that many other games could learn from.

NetherRealm Studios is also at the forefront of providing cosmetic customization options. Injustice 2 introduced a unique RPG-style gear system, doling out new outfits and weapons to its eclectic cast of characters. NetherRealm provided a large amount of shaders to alter the color of outfits as well. Want a Harley Quinn clad in yellow? Go for it. Want to a see a version of Batman that looks like he popped off the pages of a 1970s comic? You can do that too. With Injustice 2, NetherRealm got everything right that everyone else continues to get wrong .

Why do you play a fighting game? If it’s to master the fighting alone, then a lengthy story mode might be nothing more than a distraction from the main course. Today fighting games need to do more than just invite mastery, though. A better story, customization, and better cosmetic options will enrich the experience for those looking for a single-player experience while also allowing competitors more flexibility and more ways to showcase their personality in an ever expanding online community. It isn’t just about more options either. It is about hitting that right balance of options that will make fighting games more robust for all comers.