The conventional wisdom is that videogame movies – that is to say, movies based on videogames – suck. Conventional wisdom is, thus far, correct about that, although I’ll disagree that it’s an incurable condition. I maintain that it’s mostly a combination of picking the wrong approach (“How about instead of the Mushroom Kingdom it’s an urban police-state, and Bowser is just some guy?”) or the wrong game (“Huh. This Resident Evil movie is just a weaksauce George Romero knockoff. I wonder how that happened?”)

I blame the second one much moreso – some games, particularly most of the big sales goliaths of the post-PlayStation era, just don’t make for good narrative foundations. I reviewed Halo Legends this week and, well, let’s just say I’m far from shocked that the two best episodes are based around either subverting or mocking the source material.

Oddly enough, though, movies about videogames have, as a genre, fared much better. It’s even produced a few bonafide classics, which is more than can be said for the “based on” side of things. Why that is, I dunno, but it makes for a nice list, so, without further ado…

(Oh, and anyone who wants to know “why Avalon isn’t on here” had best have A) actually seen it and B) have a rationale for its inclusion beyond “Mamoru Oshii did it.”)

Alright, fine, so this is mainly here for sentimental reasons. It’s an absurdly silly, emotionally manipulative film showcasing all the most insipid cliches of late-80s family fare. And yet, as one of the few films of its time to try and put gamer culture – albeit a fanciful, Rocky-inspired-sports-movie version of it – onscreen, it can’t help being endearing. The plot is a pre-teen reworking of Rain Man: A kid (Fred Savage) breaks his psychologically-impaired younger brother – a videogame prodigy – out of a mental institution and hits the road. The plan: Enter “The Wizard” in the world’s biggest gaming competition to prove that he’s “normal.” Yes, even back then we knew it was just a giant infomercial for Nintendo and Super Mario Bros. 3 in particular (you think pre-order bonuses are a big deal, kids? Back in the day, big games were advertised by entire films!) but y’know what? In a world where gaming is blamed for everything from school shootings to obesity, here’s a movie where videogames give purpose to the lost, glory to competitors and even mend broken families. That’s got to be worth something, doesn’t it?

Here’s a movie where not only videogames but also computer hacking are able to – literally – save the world though, of course, not until after they almost destroy it. Young Matthew Broderick is a proto-hacker who likes to hack game developers’ databases and “beta-test” their upcoming product uninvited. Small problem: His most recent conquest is actually an artificial intelligence supercomputer that the Army has been letting maintain America’s nuclear arsenal, and the “game” of Global Thermonuclear War he thought he was playing has made the machine think it’s actually at war with Russia… and it’s getting ready to counterattack. Tick-tock. One of the earliest cyber-age nerdsploitation movies, and also one of the all-time great Cold War technothrillers. 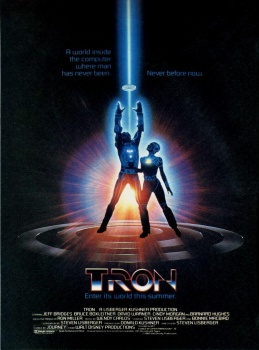 A wronged game designer (Jeff Bridges) tries to inform on his corporate employers’ misdeeds, but instead gets digitized by the Master Control Program (the evil self-aware computer intelligence actually behind said misdeeds) and zapped into the computer world – where humanoid “program” citizens are forced into videogames as gladiator combat and worship human “users” as gods. Hundreds of books, movies, games and so forth have used this setup since (Reboot, for example) but Tron still got there first. A mix of low-tech rotoscoping, blue-screened live action and backlit animation (gel lights projected through animation cels) were combined with what was then the cutting edge in CGI to create the film’s signature look, a three-dimensional extrapolation of the bright-on-black default look of most early-80s arcade titles. Regarded as one of the “fall of Disney” financial misfires at the time – alongside The Black Hole and Something Wicked This Way Comes – it’s gone on to become a cult classic. In 2011 fans will be rewarded with Tron: Legacy, a sequel even the most ardent among them never saw coming.

David Cronenberg (The Fly) directed this one, seen by many as a digital-age sibling to his 80s classic Videodrome – which sadly got lost in the shuffle of virtual reality movies post-Matrix. It deserved better. Set in the undefined near-future, it’s a thriller in which Jude Law plays sidekick/protector to a famous game designer (Jennifer Jason Leigh) fleeing assassination by anti-videogame terrorists. Read that last part again, and marvel at how long you’ve managed to go without seeing this. In this future, tech has all gone biomechanical and the game consoles are like gooey, VR-generating organs you plug into your spine to experience, meaning that the characters – to say nothing of the audience – soon find themselves unsure which threats are real and which are just in the games. Weird as hell and well-acted, but the big treat for gamers will be seeing videogame staples like fetch quests, puzzle solving and hidden weapons played out in icky, R-rated “reality.”

Sometimes all you need is a great premise, and The Last Starfighter has one of the greatest. Picture this: Your life sucks. You’re living a dead-end existence in a windblown middle-American mobile community, everyone takes advantage of your generosity, you’re broke and you just got a rejection letter from your last-chance college. The one pathetic thing you’ve got is being the all-time champ at the town’s lone arcade game, Starfighter. Then, one night, a mysterious stranger shows up out of nowhere with some surprising news: Starfighter isn’t a game, it’s a training simulator used to scout out talent for an intergalactic air force, and your uber-1337 skills have qualified you for a spot on the squad! If there’s a better encapsulation of gamer wish-fulfillment fantasy, I haven’t heard it. It helps that the movie itself is a great little sci fi adventure on its own, with some of the first entirely-CGI special effects ever used and a funny B-story about an cyborg clone of the main character subbing for him back on Earth, but no one’s ever quite nailed the escapism aspect of gaming in a narrative story since this. It’s The Neverending Story for gamers.

Amazingly, despite how much more mainstream videogames are now, none of these have been remade yet. Tron is getting a sequel, and Wargames got a direct-to-DVD sequel/knockoff, but that’s about it. Of course, if they remade Last Starfighter today, it’d probably involve Army Recruiters showing up at kids’ front doors when they unlocked Call of Duty achievements: “You’re pretty good at pwning noobs, son. Now, Uncle Sam wants you to pwn the enemies of freedom!” I can’t decide if that sounds like the best thing ever, or the worst.

Correction:
Just wanted to clear something up from last week’s column. I never meant to imply that the TV Tropes website was somehow a bad thing, or that I had anything but respect and encouragement for its fans, users and tropers. My antipathy was exclusively reserved for people who abuse TV Tropes as a would-be debating shortcut – specifically the ones who act like tools about it – and I apologize if the distinction was not clear to anyone.