If you’re familiar with the MMOG space for the past, oh, five or so years, then the upcoming scenario probably will sound awfully familiar to you. Step One, new game is announced. Step Two, new game is hyped up as being the one to knock World of Warcraft from its golden throne for reasons A, B, and C. Step Three, new game comes out, gains modest subscriber base, fails to make much of an impact. Step Four, new game stabilizes quietly or sinks between the waves. Step Five, see Step One.

The cycle of “WoW Killers” from Guild Wars to Vanguard to Warhammer Online is well chronicled, and if anyone thinks that BioWare’s upcoming Star Wars: The Old Republic will well and truly dethrone Warcraft, then I’ve got a bridge on Coruscant to sell them. Of course, TOR won’t kill WoW, but that doesn’t mean it doesn’t stand a chance to steal a hefty chunk of its subscriber base and come in at No. 2. SW:TOR has a hell of a lot going for it – and these are five reasons that Blizzard should be watching its back:

#1 – Fans: Now, when I say fans, I don’t mean fans of Star Wars. Everybody loves Star Wars, sure, but if a massive pre-existing fanbase were all that an MMOG needed to achieve superstardom, we’d probably be writing about what games could possibly challenge the unquestioned rule of Star Wars Galaxies and Lord of the Rings Online. No, I mean BioWare fans – specifically, fans of Knights of the Old Republic.

If fifty million people like your franchise, but only fifty of them are gamers, a game based on that IP won’t necessarily sell well. The millions of people who were fans of Warcraft when WoW came out were already, by definition, gamers – and with roughly two million copies sold, KotOR has its own sizable fanbase. These are people who know and like BioWare’s interpretation of that era in that galaxy far, far away, and they are most assuredly gamers. We’re not talking casual Peggle and Wii Sports gamers, either; they are the type of gamer to sit down and complete a demanding RPG.

BioWare has more people ready and waiting to give their game a shot than any other MMOG since… well, WoW. The more people who pick the game up out of the gate, the closer a given MMOG is to reaching that critical mass where people start playing the game because all of their friends are playing it.

#2 – Funds: BioWare is, as we all know, owned by Electronic Arts. Yes, the very same EA that is the second largest videogame publisher in the world, beaten only by rival Activision. EA’s pockets are very, very deep, and there is more money being pumped into the development of The Old Republic than you or I could ever know. The voice acting alone is surely costing a very pretty penny, and that’s just one part of the overall budget.

It’s true that money put into a game does not necessarily equal game quality, but having the money and time to polish a game to perfection and hire talented designers certainly doesn’t hurt. Oh, and if you think EA is just going to inject TOR with greenbacks during development and then fail to market it, you’ve got another think coming. When the game comes out, it’ll have a marketing blitz unheard of for an MMORPG that doesn’t have War or Craft in the title. Here’s where brand recognition of Star Wars and KotOR does come in handy – I’d wager that while most people would see ads for EA’s other MMOG Warhammer Online and think “Whathammer?” The universe of TOR is far more recognizable… and marketable. 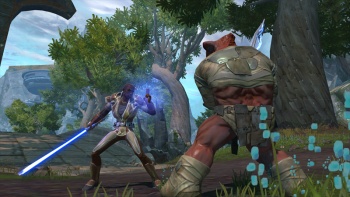 #3 – It’s Not WoW Lite: It’s true that the IP of Lord of the Rings and Warhammer both predate Warcraft, but the problem with those games was that they follow the WoW formula – or rather, the EverQuest formula that WoW refined and polished. You jump into these games and you see elves, dwarves, and orcs in a fantasy world as warriors and sorcerers, getting quests to kill ten wolves and moving from town to town. Sure, if you look at every game in-depth you can see that they all do their own things beyond the superficial similarities to WoW, but someone playing the 10-day free trial won’t see those differences. They’ll see the similarities and wonder, “Why do I want to play WoW Lite when I could just go back to playing actual WoW?”

To start off, TOR is sci-fi, not fantasy, which is a huge advantage in itself. There are no orcs and elves wielding spears and bows, they’re Twi’leks and Wookiees with blasters and lightsabers. Even if the underlying game were just the EverQuest model in space, a change in setting can go a long way in making it not feel like the same game. KotOR combat doesn’t feel just like a clunkier version of WoW‘s combat (like certain other games I could mention that start with a W and end with an arhammer), so if the folks at BioWare Austin can replicate that feel in MMOG-form, they’ll have a much better shot at getting people to stick with their game than going back to “the real McCoy.”

#4 – It Could Be Something New: This is very much related to point #3, but while TOR is strongly based on “not being just like WoW,” it also earns points on “doing something fairly different in the MMOG space.” Yes, every fan of any MMOG on the market can point to their game and protest, saying that “It lets you fight and control territory on a scale no other game does!” or “It lets you poke sheep in the ass with a spoon!” but again, these are things that really only matter to passionate, high-level players. WoW offered easy accessibility and fun gameplay as well as a heavily quest-based experience from level 1 onward; any game that wants to emulate its success needs to push its strong points early on as well.

So with TOR you have heavily narrative-based gameplay where one’s dialogue choices and actions can affect the story you play through (see also: Flash Points) and a game where every single NPC has every line of dialogue fully voice-acted. Those are two huge selling points that have never been done before – or if they have, certainly not in a game of this scope, nor a game with this budget – and that can be demonstrated as soon as you begin playing. By offering a new experience, BioWare increases the odds that players will stick around because it’s something they can’t get easily – or at all – back in WoW.

I think that point speaks for itself.

BioWare Austin’s Old Republic may be better poised to be a serious challenge to WoW like no other game in the past five years but, after all, there are two sides to every story, and every point has its counterpoint. However, that may be a story for a different day. Or a different week.

Check back next week for the 5 reasons that WoW has nothing to fear from Old Republic.

John Funk still can’t make up his mind about being a Jedi Knight or a Sith Inquisitor.