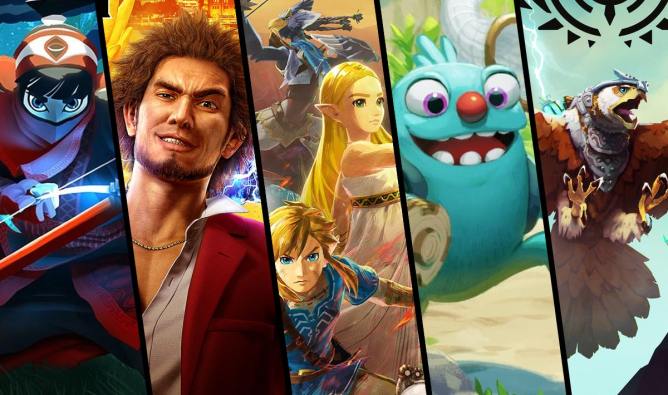 Thanks for making it through the year everyone — 2020 has been uncharacteristically awful worldwide, but surprisingly good for video games. November brings the holiday flood of new titles big and small as usual, but with the added palaver of a new console generation on top. There are massive games like Assassin’s Creed Valhalla or Godfall, requisite PlayStation exclusives such as Spider-Man: Miles Morales and Demon’s Souls, and quirky Japanese releases like Kingdom Hearts: Melody of Memory and Sakuna: Of Rice and Ruin. For this month though, we are looking at five single player releases of varying scope and scale: The Falconeer, Yakuza: Like a Dragon, The Pathless, Bugsnax, and Hyrule Warriors: Age of Calamity.

As one of the few brand new games releasing alongside the Xbox Series X, The Falconeer is a notable and just very cool-looking action title. Made by solo developer Tomas Sala, this is an enormously ambitious game that echoes Panzer Dragoon (or Lair, if you’re feeling cheeky), giving players a formidable warbird to fly into battle against the many factions of Ursee, a beautiful, deep, and deadly watery world.

The Falconeer makes use of textureless visuals that both call back to early 3D games such as Star Fox and have also been seen in newer indie titles like Race the Sun. This frankly gorgeous art style is apparently quite efficient for delivering quality at high resolutions. With luck this unique and mysterious indie game will not sink, but soar.

The Yakuza series has held a special place in my heart ever since reviewing Yakuza Kiwami for our sister site OnlySP early in my career. The naming convention, however, could use some work. In the game’s native Japan, the series is known as Like a Dragon, referencing Kazuma Kiryu, otherwise known as the Dragon of Dojima and the series’s protagonist for the first seven installments. Although eye-catching and more marketable, the Yakuza moniker in the west tends to turn away gamers who do not want to play another crime simulator, which is not at all what the games are like.

Rather, the name is more like Star Wars: The main characters are not the ones in favor of the eponymous wars, but they are fighting for a cause nonetheless. Likewise, Kiryu spends nearly the entirety of his time fighting against crime in its many guises (in addition to goofing off in the series’s famous collection of minigames and side quests, of course).

This latest single player entry is the first to follow a new protagonist, but like Kiryu before him, Ichiban Kasuga has been betrayed and now must go against the various criminal factions of Yokohama in order to discover the real reason behind the betrayal. Along with the shift from Tokyo to Yokohama as the setting, Yakuza: Like a Dragon discards 3D brawler mechanics in favor of Dragon Quest-inspired turn-based battles. Given the incredible success of its sister series under Sega, Persona, this switch to turn-based battles might well open up a whole new audience for Yakuza.

The silly, exciting, and deranged ways that Yakuza: Like a Dragon employs its turn-based JRPG trappings could be a blast. From calling “summons” on your mobile phone, to a “job system” that requires going to the agency to take on various vocations, Ryu Ga Gotoku Studio knows exactly what it is doing to creatively shake up the series.

This richly detailed but unrealistically stylized open-world game is what many have been asking for since Journey: a relatively minimalist take on an epic Zelda-like adventure. The Pathless casts players in partnership between a fast, acrobatic hunter and her eagle companion as they explore a beautiful mythical world in the style of developer Giant Squid’s previous work on Abzu and Journey.

Players move between wide-open fields and mysterious structures sans minimap, seeking out landmarks and “cursed spirits” that must be vanquished to return light to the land. As fluid movement is a core pillar, there is no traditional way of “aiming” the hunter’s bow. Rather, there is a rhythm-based system that allows the player to feel as skilled and powerful as the hunter as they swoop across the game world.

With so many open-world games in the industry these days, it is particularly important to take note of single player titles that eschew realistic graphics and standard settings, even when the alternative is so often this mythic, Shadow of the Colossus style. And besides, in our rapidly changing world, a wide natural landscape filled with mystery and adventure is a beautiful fantasy to take part in.

Speaking of wide landscapes to adventure through, Bugsnax is also here to provide a shot of weird and whimsy into the adventure game genre. The title combines some of the coolest and silliest aspects of point-and-click, stealth, and action games with excellent voice acting and a plethora of “bugsnack” critters (half bug, half snack) to be collected.

Players land on Snaktooth Island, the only place where the curious Bugsnax creatures are found, and immediately become entangled in a mystery that has shattered the local colony of Grumpuses. In order to rebuild the town and find everyone, players will have to discover, track, and capture over 100 different Bugsnax. This mission is apparently achieved by observing them and employing various lures and traps. If the Pokémon and Ape Escape comparisons were not already enough, once captured the Bugsnax can be fed to the Grumpuses, at which point their limbs transform into various foods based on the Bugsnax consumed.

Developer Young Horses has assembled a murderer’s row of audio talent: from the aforementioned voice actors to Kero Kero Bonito’s earworm theme “It’s Bugsnax.” Lurking beneath all of it is a sense of undefined menace, like perhaps eating bugsnax and transforming various body parts might not be the best idea… but that is to worry about later. For now, single player gamers can be excited for Bugsnax and hope the terrible truth does not come for us too quickly, the way these walrus-like Grumpuses come for me in my nightmares.

Finally, we cannot go a year without a new Legend of Zelda release, this time a follow-up to the well-received Hyrule Warriors Musou action game. Hyrule Warriors: Age of Calamity takes place in the disastrous past of Breath of the Wild when Ganon reemerged, his armies swarming across Hyrule and leading to the apocalyptic world we now know so well.

However, something has changed: Due to an unexplained phenomenon, a cute egg-shaped Guardian has traveled back in time to join Link, Zelda and the Champions in their fight against Ganon. Could this suggest a victory in the past for Hyrule? It certainly changes the scope of a war that was really only talked about in the original Breath of the Wild, allowing for more playable characters with greater powers than we ever knew (such as Zelda being able to use the magical Sheikah Slate in battle).

For purists, Age of Calamity has pros and cons: The history of Breath of the Wild is finally being portrayed in a game — but the title is another Musou in a long line of hack-and-slashathons. With the help of Nintendo, it may be the greatest of these that Koei Tecmo has produced — but the established story is being altered by time travel.

Concerns aside, Hyrule Warriors: Age of Calamity will at least be a massive sequel to the first Hyrule Warriors, which was already quite a treat for Musou fans. Hopefully a sequel to Fire Emblem Warriors is also in the cards.

As a result of release date shifts and the general state of the world, there are other games set to release soon that lack firm release dates. Until next month, enjoy playing single player games!