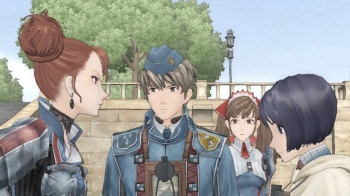 Members of the PC Master Race can soon get their hands on Sega’s tactical RPG shooter Valkyria Chronicles, which is coming to Steam and other distribution platforms this month.

Early in its lifetime, the PS3 struggled to find noteworthy exclusives, but Sega’s 2008 tactics-RPG hybrid Valkyria Chronicles stood out from the pack with its addictive gameplay, anime-like visuals, and successful combination of elements from several genres. Now PC gamers can experience Valkyria Chronicles for themselves: the former exclusive is coming to Steam and other distribution services on November 11.

Valkyria Chronicles struggled for the first few months after its release despite strong reviews, but managed to pick up an incredible 400% sales increase in 2009. The sequel was released for the PSP in 2010, but Sega never localized Valkyria Chronicles III for western audiences.

With Valkyria Chronicles hitting the PC for a mere $20 in less than two weeks, perhaps the renewed interest in the series will nudge Sega into bringing the third entry over to North America. If not, you could always try the Vita-compatible fan translation.