Developed and published by Clapfoot Games. Releases on February 3, 2016 on Xbox One (reviewed) and PC. Review copy provided by developer.

Marrying different genres in video games is hardly a new endeavor, but the best hybrid is more than the sum of its parts. Set in the style of a 1950’s sci-fi flick, Fortified, as a hybrid game, does nothing if not demand your attention. Fortified marries the mental gymnastics of tower defense with the excitement of a third person shooter and the adrenaline of real time strategy, all while capturing the spirituality of one of my all time favorite movies, Mars Attacks! It is a thematically fascinating Frankenstein monster of a game, carrying with it the burden of applying a strong continuity across a variety of different genres without causing a sensory overload. So, does it succeed? 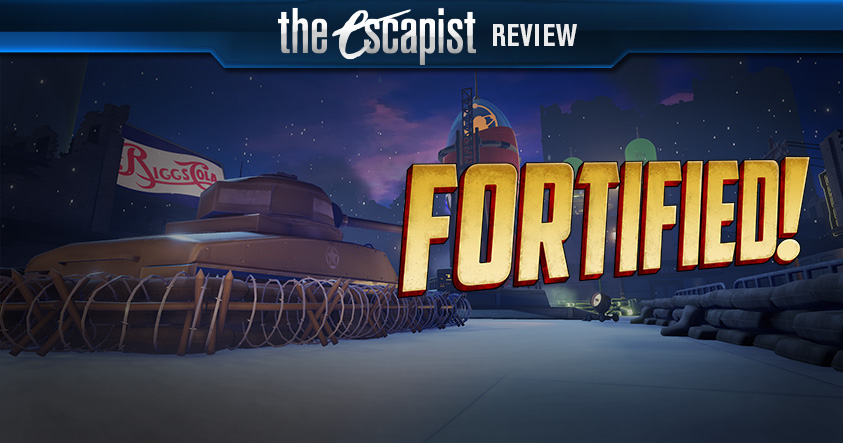 In Fortified, Aliens have invaded Earth, and a brief intro explains the creation of a top secret task force by the government in an effort to take them down. This take-down is done through the completion of a series of maps, in which you are tasked with defending at least one rocket from swarms of aliens. After receiving a certain amount of damage, the ship will fall off its base and you will have lost. Each map features a number of waves that these armies of foreign invaders come in, giving the player time in between waves to set up additional structures in order to guard the spaceship, leaving you as – hopefully – the last line of defense for any that are able to sneak past your traps. The amount of time granted in between waves depends on the difficulty selected – Normal gives you unlimited time to sell unnecessary structures and place new ones, while Hard gives 15 seconds and Insane allows only 5. When beginning a map, your character is granted a set amount of in-game cash, which is used for structures. Killing enemies during waves increases your available cash, allowing you to add new and upgraded defenses between waves. These resources become limited as the difficulty progresses, so planning and strategy is key. 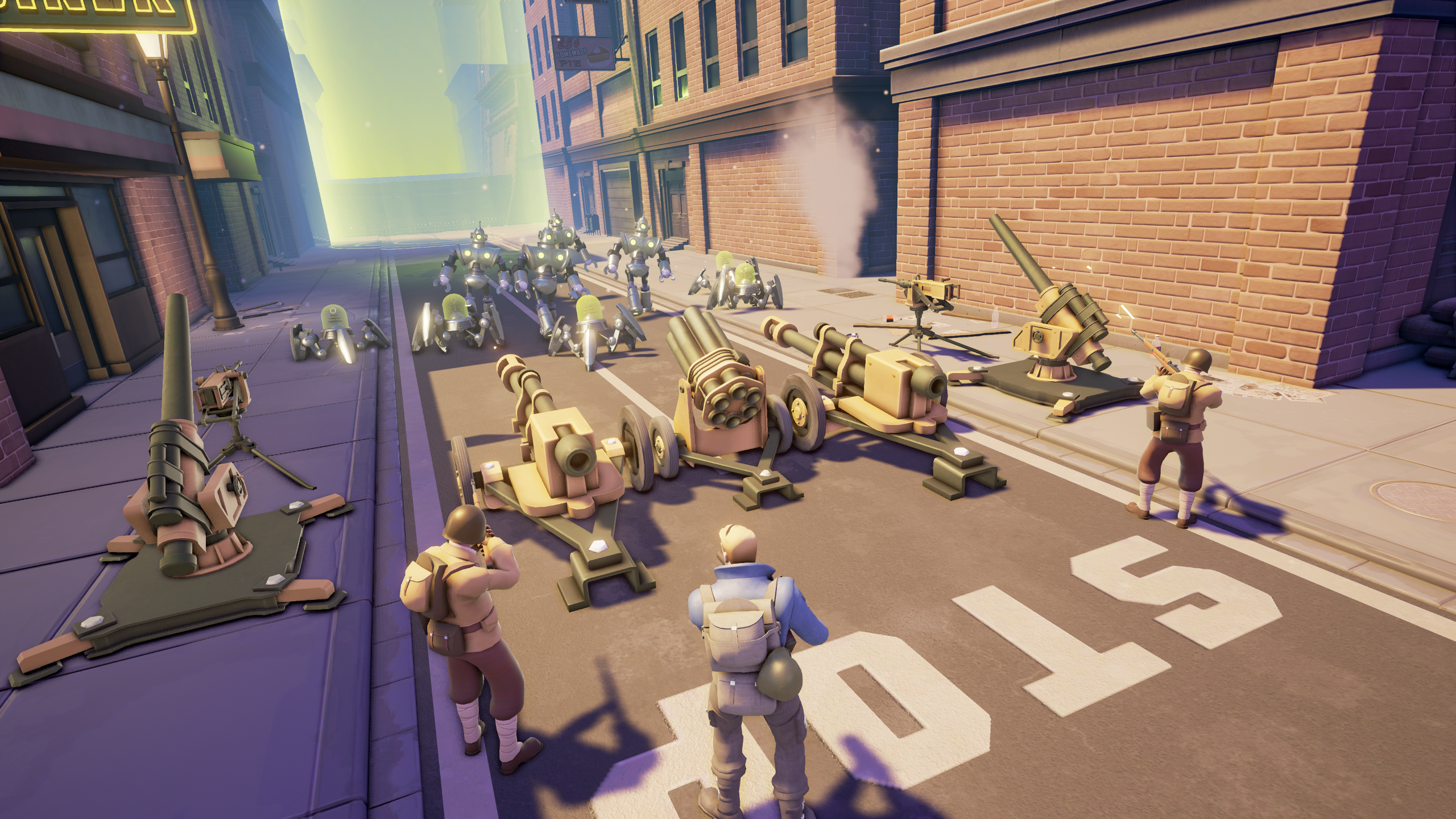 You are given the option of selecting one of four extremely different characters, all of whom are accompanied by a varied arsenal of weapons and structures. It’s apparent early on that some characters are stronger when attacking from a distance, while others are most effective in the thick of action. Each character also has a unique “Hero Power,” which can be activated after a certain amount of time. The Captain is a military leader who has a greater selection of troops, the Rocket Scientist is an explosives expert and has a heroic power that grants flight and unlimited ammo, and The Agent is a super secret spy with access to more techy weapons. My preference, however, was the Spaceman, who is more hands-on, has a Hero Power that freezes all enemies within a certain proximity to him, and his structures have a perfect balance of anti-air, fire assault, and freezing.

The firing mechanic in Fortified is particularly fluid – the weapons can be manually reloaded, but will also automatically reload when emptied, and the game encourages swapping between weapons during this period. If timed correctly, this grants a consistent rate of firing between two different weapons. With each character I played, I tried to balance one weapon with a freeze or slowing ability and another with a burn modifier. Most freezing abilities are helpful with larger groups of enemies for crowd control, and swapping to my other weapon let me do massive amounts of damage while they were slowed or immobile. 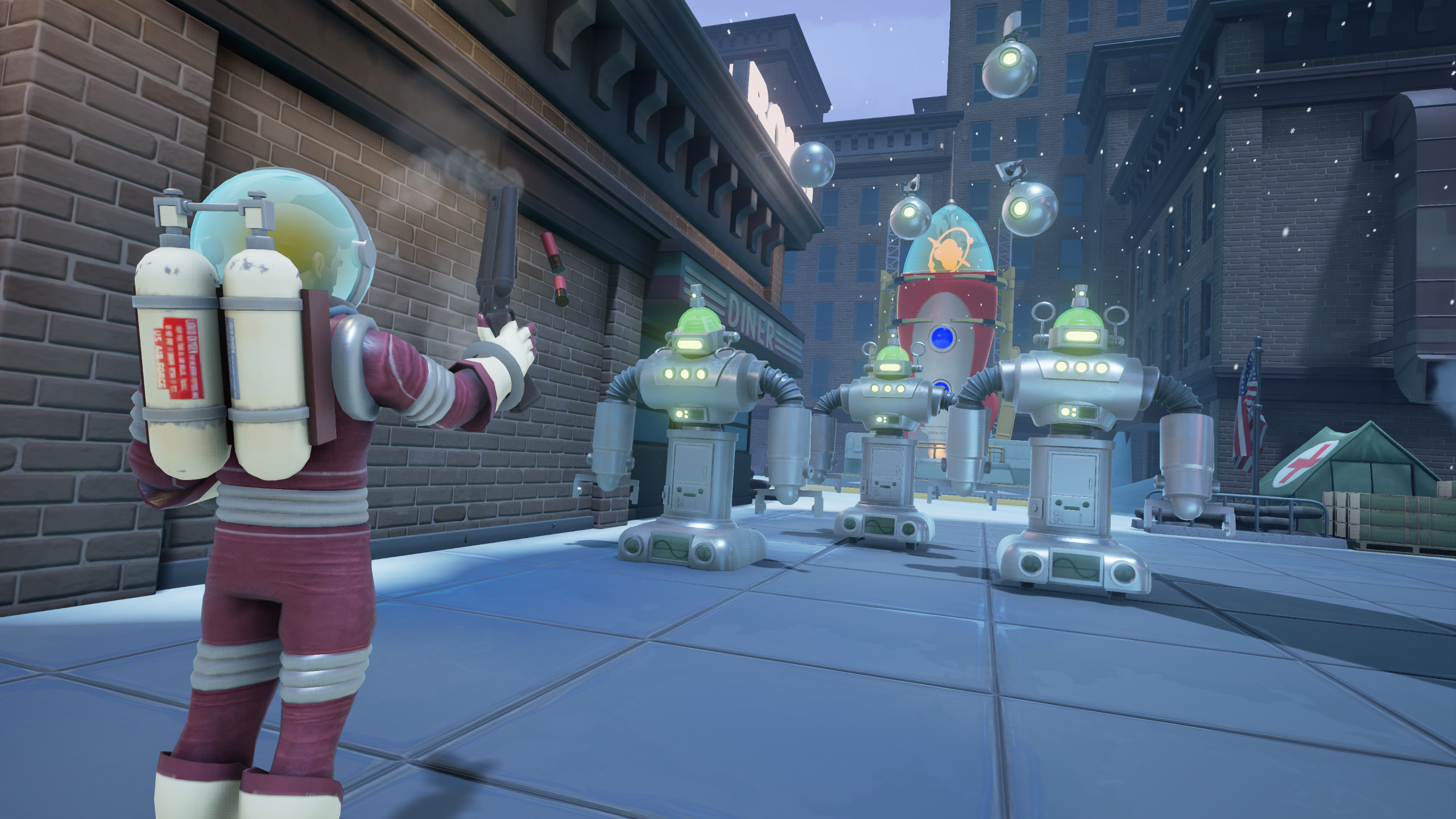 Structures include anti air weaponry for attacks on flying invaders, wall-mounted structures that can utilize fire, electricity, and freezing, turrets, ground mines, and so much more. The various Infantry structures were my favorites. Instead of a stationary item, infantry soldiers are mobile warriors that follow orders, which are given with the touch of a button. You can have them accompany you around the map, making for a single explosive army, you can instruct them to guard their post, or you can send them to protect the base. This is especially convenient when protecting more than one base on any given map.

There are a total of fifteen different maps available across two different game modes. Campaign mode has 12 maps, each of which have a set number of waves, whereas Invasion mode adds three additional maps, with unlimited waves of invaders, with mutators applied during each wave. Some of these help the player by granting a faster recharge time for Hero Power or more powerful weapons, and some benefit the enemies, by allowing them to deal more base damage or by giving them more speed. There is also a restriction on placing structures, limiting you to the area closest to the base instead of from the base to the spawn point. After taking a certain number of hits on any mode, your character will die and respawn. While there is a health bar for the rocket you’re defending, and a bar that indicates how near you are to your Hero Power, there is no health bar for your character. That feels like a fairly standard mechanic, and its absence was more than a little confusing. 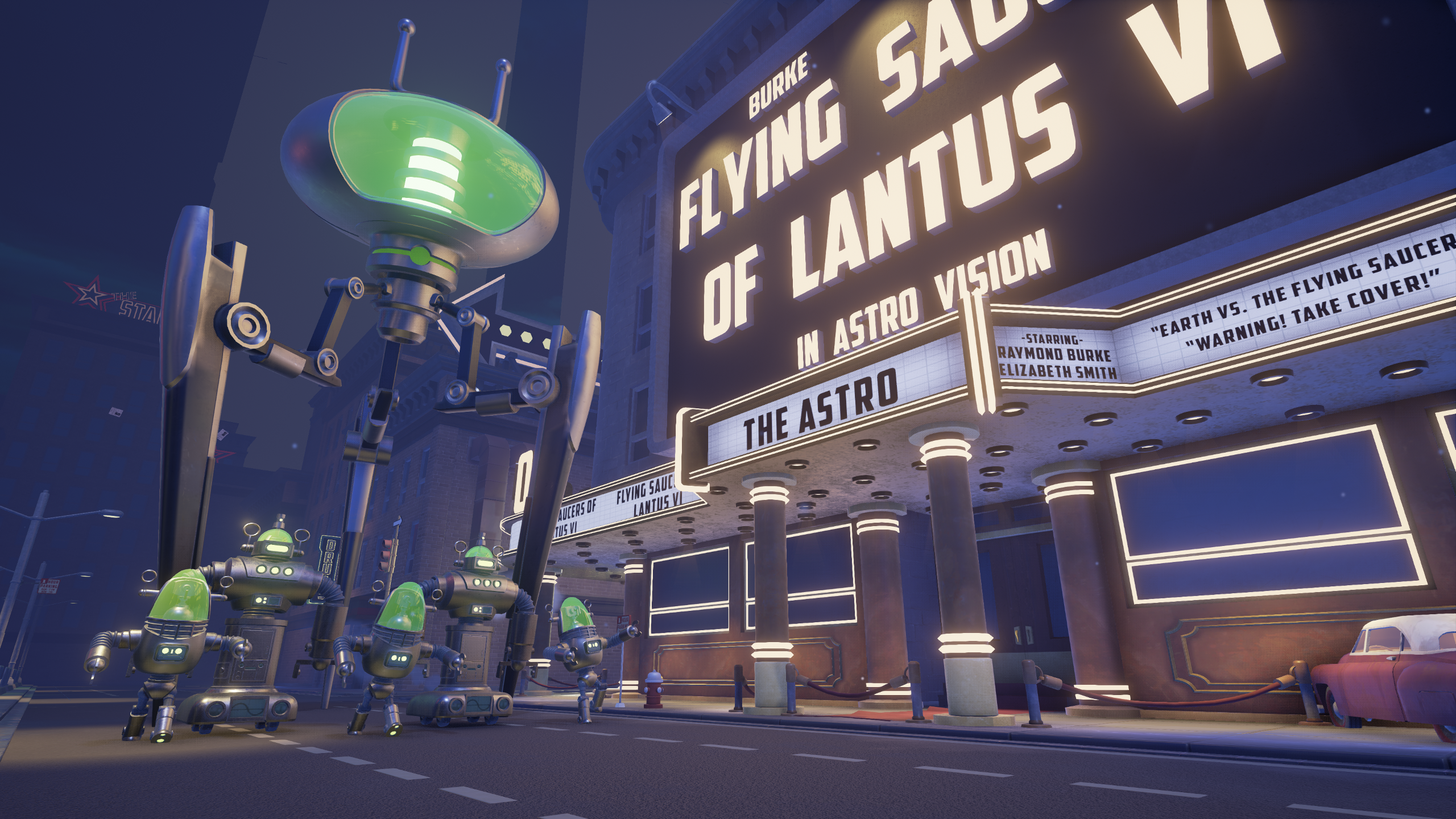 The game consists of both solo and up to four player online co-op. Playing solo was quite the experience – frustrating, fun, and a little more frustrating, particularly when navigating away from Normal difficulty. By wave four of the ninth map I was dangerously close to chucking my controller at the wall, and not even Slim Whitman could slow some of the bigger enemies down. Aliens were coming in five waves from three different spawn points, and I was tasked with defending three different bases across the map. The enemies were so varied that a combination of base support and long-distance assaults would be needed, and it is difficult to find such a balance with a single character, even the Spaceman. Not impossible, as I was eventually able to luck my way through the rest of the game, but not without a level of difficulty that danced along the “unfair” line.

In co-op, the money allotted for structures during the course of the map is split between the players, although each player is given their own pot to use. Because of this split, you are placing fewer structures than in solo and have to rely on communication for covering the map. If I were limited to a single suggestion regarding Fortified, it would absolutely be “play co-op.” As is so frequently the case, this game is best spent playing with others. One complaint is the absence of split-screen co-op, a feature that I could easily see bringing the game from “great” to “basically perfect.”

Fortified is not a simple game. It is brutal, particularly when you brave the difficulties above “Normal.” The most important part about this challenge, however, is how deeply satisfied I was upon finally completing a seemingly impossible map. There was jumping and cheering and punching the air, and I was not only forgiving of the difficulty, but surprisingly appreciative of it. By the time I reached the final battle – and oh my gosh, is that one a doozy – I felt like I had been sufficiently prepared, and was fully aware of the exact types of enemies I would be facing, as well as the ideal method of attack for taking them on.

Fortified is the type of game I can easily see myself revisiting as part of my regular game rotation, particularly if a local co-op option is ever added (fingers crossed). Clapfoot did an excellent job focusing equal attention across all areas of of the game. The standard formula of tower defense is enhanced by the shooting mechanics and frantic strategizing, resulting in a sort of left-brain right-brain synergy that feels more natural than peanut butter and chocolate. I personally cannot wait to see what comes next.

Bottom Line: Fortified marries multiple different genres while maintaining consistent waves of challenging fun in a cohesive experience. The game is best when played as part of a team, although the omission of split-screen co-op is a disappointment, and the lack of a health bar is a bit frustrating.

Recommendation: Do it. Do it for Earth.