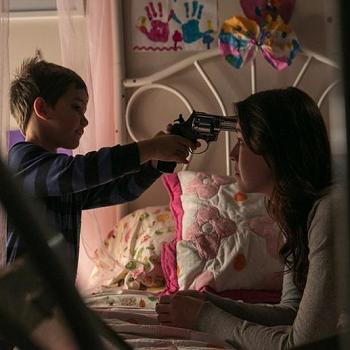 The UK’s leading horror fantasy film festival have announced the first series of films which will be released under ‘FrightFest Presents’.

Chances are that if you consider yourself a horror fan, you’ve heard of FrightFest, the annual, London-based film festival which has premiered everything from future stateside hits like Pitch Black and 28 Days Later to ridiculously underrated gems like Pontypool and Kill List.

Ahead of this year’s festival, which kicks off tomorrow and goes through the end of the month, FrightFest has announced a major collaboration with Icon Film Distribution, as well as the titles and synopsis’ of the first seven film that will be released under the curated banner “FrightFest Presents.”

Without further ado, let’s get into it!

‘Alpha Male’ Smith and his Beta, Keith, move to take over a local community. They hook up with restless Female, Denise, igniting a deadly feud in which emotions run high and deep-seated grudges resurface amongst the tribe. Are we not men? Or are we simply beasts?

After an all-night party, a group of hungover twenty-somethings awake to a beating sun and a seemingly carnivorous beach that devours anything with a heartbeat that touches the sand. His fourth film as a filmmaker, Gabaeff is also known for his work on The Amazing Spider-Man 2, Men in Black 3 and The Place Beyond the Pines.

Five young people wake up dead. Washed up by the tide they scramble to an abandoned beach house, soon realising that the perpetual night and blasts of pain suggest this is some version of hell. Between in-fighting and attacks by a demonic shadow creature, they recall the collapse of the nightclub that brought them here – and begin seeing hope of a second chance in the cabin’s two mysterious paintings.

Three American tourists are crossing the desolate mountains in the formerly war-torn republic of Georgia. Daniel has just proposed to Alicia and has asked Chris to be his best man, so they stop to take a celebration photograph. Chris steps to the right, the step goes click and he finds himself standing on a landmine. From that moment on Chris cannot move or he’s dead. But then secrets are revealed, dark motives uncovered, an outside threat appears and the real nightmare unfolds. For what happens on that terrifying afternoon will become a harbinger of doom for all lost innocence.

When their regular babysitter calls to say she’s unavailable, the Thompsons find a last minute replacement to look after their three kids Christopher, Sally and Jacob while they celebrate their 13th wedding anniversary. But no sooner have the unconcerned parents pulled out of the driveway than it becomes clear that Anna is no ordinary babysitter. As the evening creeps along the children begin to realise they might be in serious danger from the psychologically disturbed woman who has invaded their home.

Fin and Joel are two teenage wasters running wild. But they get a taste of their own medicine when a teacher at the end of his tether decides to teach both schoolboys a lesson they will never forget.

January is forced to return home after a near-fatal accident whilst travelling abroad. Temporarily wheelchair bound and depleted of her long-term memory, she is accompanied by her boyfriend Callum. Not only has she forgotten her family, but her childhood as well and is surprised to discover that her home is a stately manor in the middle of the countryside. As January tries to settle in, she finds herself becoming even more estranged from her family, who just want their daughter back. January soon discovers the family are not as loving as they seem to be. Was there a dark reason why she left them in the first place?

In addition to premiering at this year’s FrightFest, these and other FrightFest titles will be released across the UK and Ireland via the Icon’s digital partners (including iTunes, Virgin Movies, Sky, Google Amazon, Xbox , Blinkbox, Google, Wuaki, TalkTalk and Volta).

The official launch date for FrightFest Presents is October 19th. Which one of these flicks piques your curiosity the most?

From Halo to World of Warcraft: An Interview With Voice Artist Laura Bailey