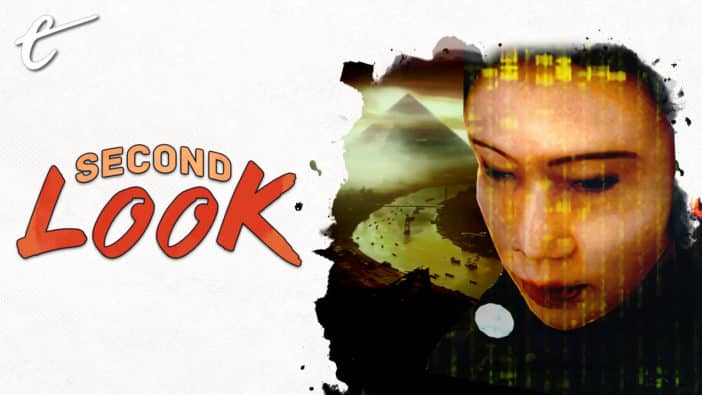 Here’s something refreshing: G String is a Source mod made almost entirely by one woman for 13 years that became a commercially released sleeper gem of 2020. It’s a cyberpunk game that isn’t glitchy, unfocused, or overcooked, and it also uses enjoyably campy voice acting, with amazingly sharp, tongue-in-cheek writing as you navigate the world in first-person.

And what a world it is, where loudspeakers advertise a government-funded human euthanasia service that requires parental consent if you’re below the age of 16. Where objectifying advertisements exist, but they’re not so much titillating as they are disturbing pieces of body art alongside gorgeous street graffiti. And it’s all set against the backdrop of abandoned apartment megacomplexes and bombed-out urban battlegrounds strewn in the crevices between high-rise towers.

G String is the sort of cyberpunk where there’s an entire ongoing terrorist attack in the first hour of the game, and everyone treats this as a mundane part of life. Misery is more than expected — it’s cynically embraced as VR companies use rising depression rates to sell their latest headset in a radio advertisement. The earth’s atmosphere is so thin that oxygen’s been privatized and commoditized to the point that people can’t go outside without a full-covering biosuit, lest they roast in the sun like vampires. While we’re a far cry from becoming Bloodrayne, suit-clad pyromancing psychic soldier protagonist Myo Hyori certainly holds her own with her psionic powers and impressive aim with a gun. 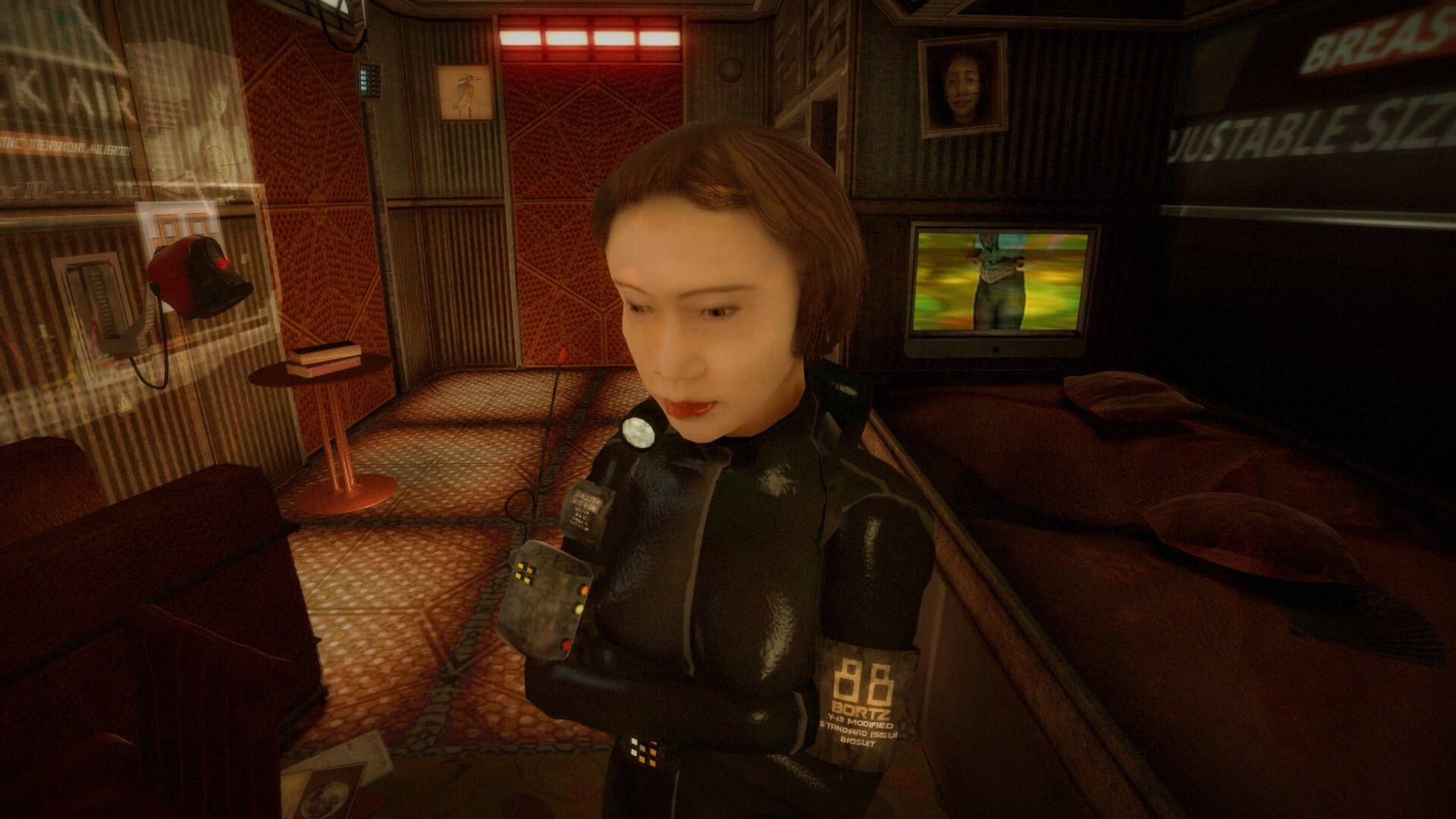 Myo lost her girlfriend and parents during a climate change disaster, and she and many Koreans like her are trapped in the steel prison of dystopian America. Now the government has abducted her so it can weaponize her pyromancy for its own evil purposes. It’s a worthwhile hook that, you might note, does not demand genital customization options to grab your interest. Rather, her detailed body animations further emphasize you and her are one, struggling together to survive against near-death scenarios lurking around every corner, from corporate mercs to automated security systems.

And yes, this game stars a lesbian. However, unlike a certain other dystopian game about a lesbian, G String maintains a pretty focused narrative. It’s just as brutal as that other game at times, with plenty of terrible things happening, but the key difference is that G String isn’t voyeuristic about its misery. While not the most graceful exploration of depression in a world gone wrong, it feels a helluva lot more genuine about it. “Shit’s f’ed, yo,” is at least to the point and sets the table for what comes next as you become entangled in a fight for the future, all while Myo just desires to survive. If that’s not tapping into the very core of most classic cyberpunk, I’m not sure what is.

This overt hostility the world presents leads to an almost Lynchian sense of the uncanny, where you can never trust your initial guess. Several platforming sections are less about hopping around and more being an intuitive urban explorer, using whatever ledge or hole you find to cram yourself through like a rat escaping a sinking ship. The environment regularly attacks you as well, from faulty equipment to sex bots that try to rip your face off because of a computer virus that’s known, but in the corporate-run future, there’s no patching out bugs unless it hurts the bottom line. Better to just toss out the current robot line in a ghetto to be hunted. 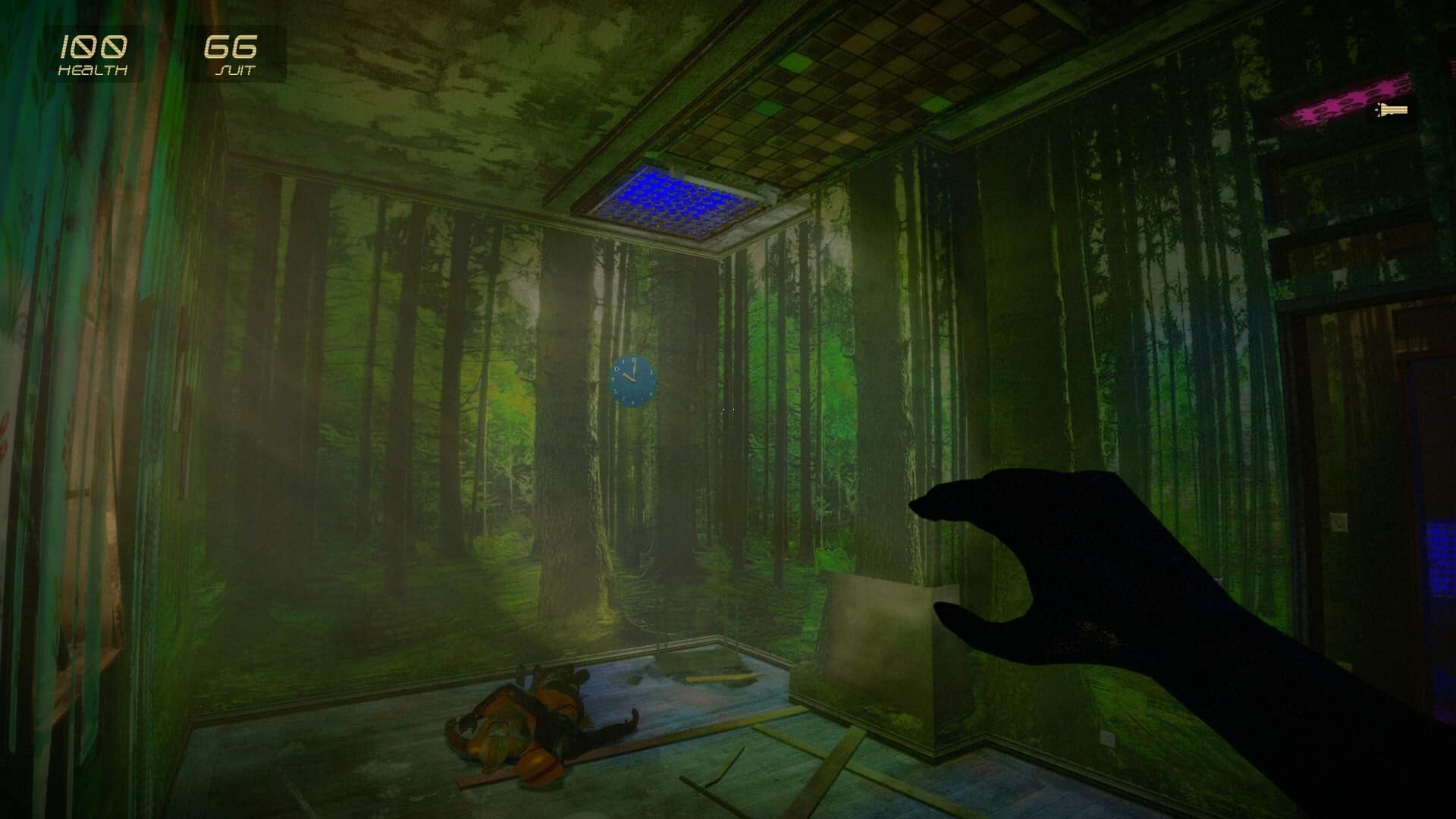 Obvious doorways are often booby-trapped, occupied by enemies, or, in the best-case scenario, a brief reprieve before things get worse. You quickly learn to check above your head for ceiling mines — yes, ceiling mines, because landmines were just too predictable. Granted, the automated sentries and military grunts are a bit on the nose with how they’ve been translated from Half-Life 2 into G String. However, developer Eyaura clearly realized that both of these enemy types are generic and boast not-so-clever AI, and she shrewdly took a note from horror games by placing them in positions where they’re a threat no matter how brainless they may be… and it works.

What’s particularly brilliant are the sections with snipers, as they’ll kill you in two hits easily if you pop out of cover, so you’ll be running from hiding spot to hiding spot, trying to parkour under fire. In theory this should be irritating, but instead it’s invigorating, another excellent twist that keeps the game from going pure FPS and instead feeling far more like a horror game in disguise. Eyaura doubles down on this with some Akira Yamaoka-esque sound samples in the game’s soundtrack. You might find yourself ducking through a hazard-laden sewer, only to be met with shrill bird calls and dogs barking, contrasting the dead pigs lying in the muck.

This oppressive, subversive air smothers everything, forcing you to endure G String’s claustrophobic, brutalist architecture constantly trying to squeeze you in just a little bit tighter than you already were. And when you are given the chance to be outside, there’s no telling what might threaten to annihilate you. Death haunts you at every turn. Maybe a meteorite strikes and you’re caught in the blast, watching your health and armor whittle down every half-second as you frantically search for somewhere to hide. Or you get caught in the irrigation canals and are funneled through twisting, contorted channels, in-engine no less. 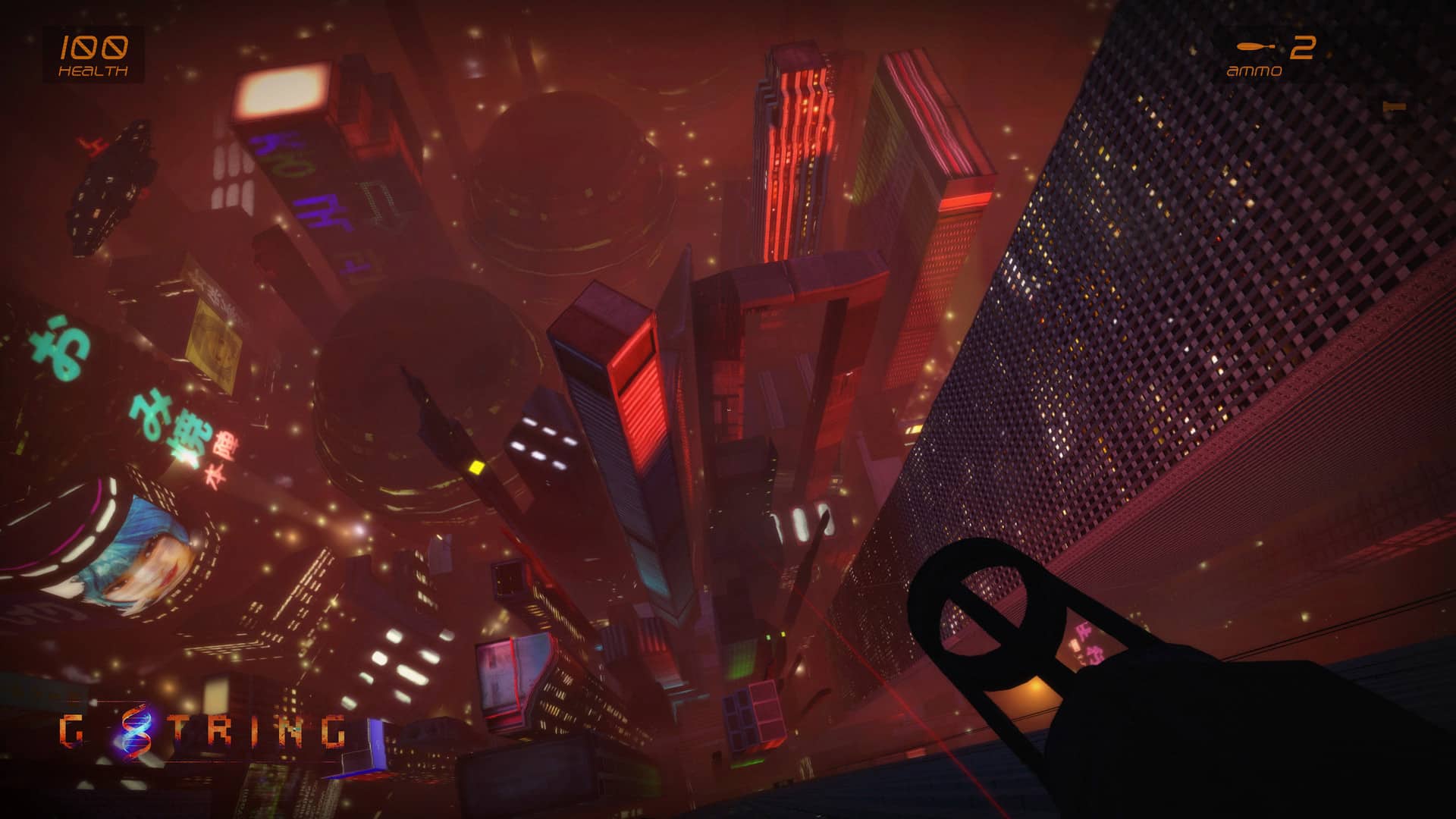 That’s the real beauty to G String. It’s obviously pushing the upper limits of the original Source engine, over 16 years old by this point, and isn’t made at all for mainstream tastes. If you go into it simply looking for a rollicking, fast-paced cyberpunk FPS, you’ll walk away disappointed. However, if you’re patient and have the stomach to navigate its bleak world, it’s a surreal, Orwellian jewel that remembers that cyberpunk doesn’t simply mean everyone has robot arms.

That’s the cost of G String being so retro-inclined. For the time, it would’ve been seen as clever and innovative. Nowadays, it’s a bit janky. Yet, it’s because of that retro mindset that it accomplishes its goals so well. Every pull of the trigger has the sensation of burst-firing a rusty nail into an enemy’s face. Combat is brief and dangerous, more evoking Metro 2033 than Half-Life 2. At one point, you’ll encounter a bleeding-out cyborg, and she’ll beg you to put her down.

There’s no achievement for this. The game doesn’t dramatically pan over her while presenting you with a “shoot or spare” prompt. G String just leaves mercy killing your fellow dystopian survivor as an option, if you feel so inclined, as a diegetic event. This is preferable to, say, a game making players do a mandatory quick-time event to slit a pregnant woman’s throat. 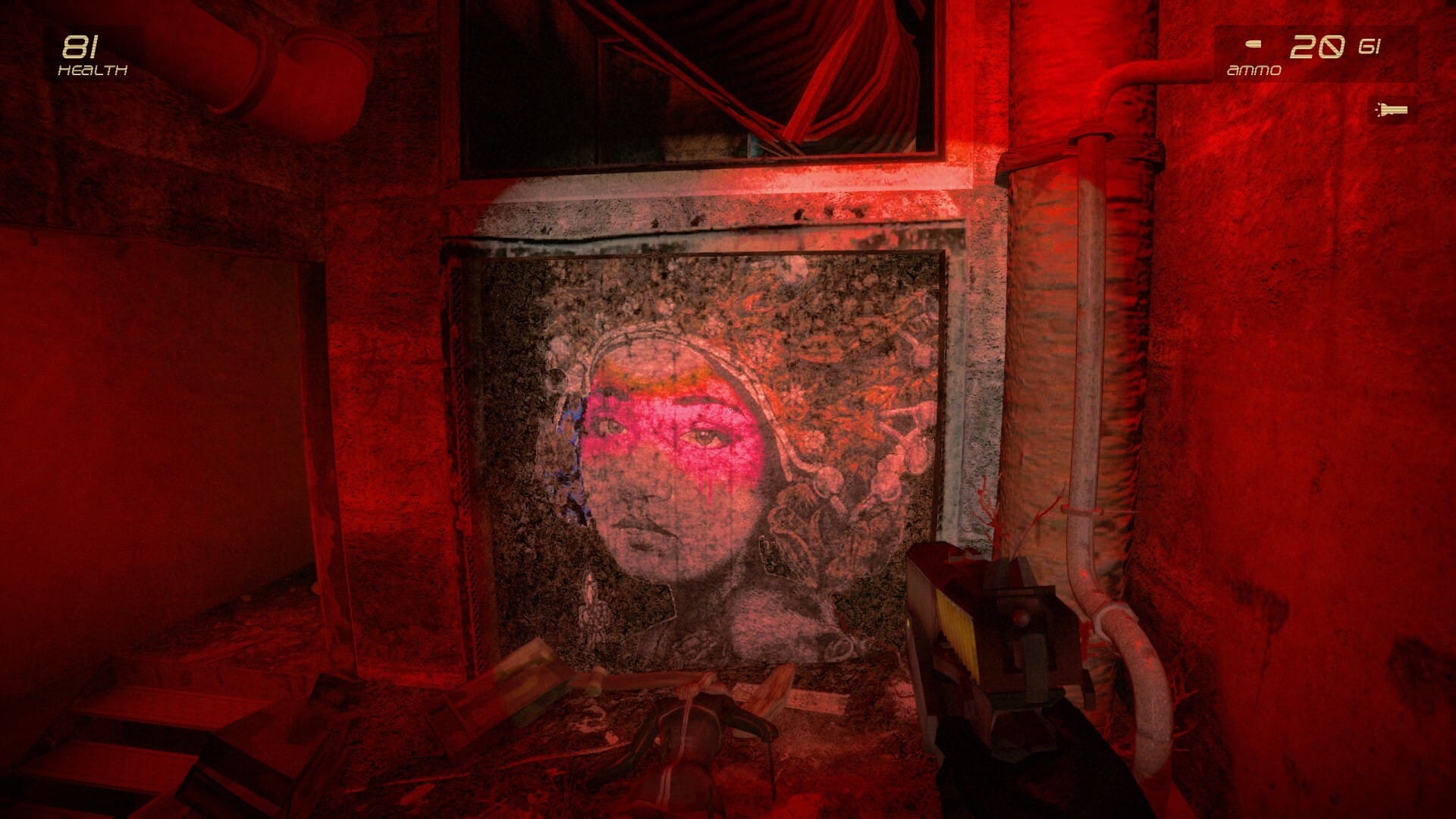 G String is so great because it defies so many industry norms where what might’ve once dated it now lends it a refreshingly concise experience. G String is beguilingly unnerving, throwing you into a tumultuous labyrinth of decaying decadence fallen into squalor. Granted, does every part of the journey make sense? Oh goodness no. You don’t get something this genuinely personal a project, with such a singular vision, without a few parts feeling odd or out of place.

However, none of that makes for a bad time. G String is a triumph of over a decade of work, and if certain other cyberpunk games have left you wanting, it’s absolutely worth your time. I can’t promise it’ll be traditional fun, but it’s a true work of dystopian art.

Now, as for next week, we’re looking for a unicorn: a divisive open-world FPS with lots of shooting, that also makes you feel emotions, and doesn’t betray player agency. Where am I gonna find that?!