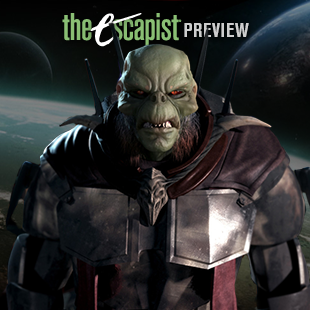 Only about half the systems have been implemented for the Galactic Civilizations III alpha build, but the “one more turn” mechanic is in full effect.

Stardock announced Galactic Civilizations III last October, and I’ve been anxiously awaiting – and actively pursuing – more information since then. It was no small shock when I saw a key for the early alpha build in my inbox earlier this week. While I’m terribly excited for GalCiv III, and you probably should be, too, the fact is, this is an incredibly early alpha build, and most of the systems haven’t actually made it into the game yet, while those that have are most likely subject to massive changes. You should take everything you read here – good or bad – with a grain of salt.

Galactic Civilizations III in its current state is a bit of a challenge for the uninitiated to wrap their head around. The complexity of the game – something that’s been true at least since Galactic Civilizations II, where I was introduced to the series – can be a bit overwhelming if you’re not familiar with how things run, and the “coming soon” text on many of the tooltips isn’t exactly blossoming with useful information. Even with placeholder text and un-implemented tooltips, however, Galactic Civilizations III is still addictive and enjoyable. You don’t really need to know exactly what’s going on to have a great time with GalCiv III, as long as you can figure out how to build and explore, you’ll be in good shape, at least for a while.

The AI options are limited to Beginner, so the alpha build isn’t going to be rushing you early or anything. Some of the AI has an impressive ability to expand seemingly limitlessly, but it doesn’t just roll over non-expert players or anything. Despite a warning from literally every race I encountered that its sole goal was my utter annihilation (resulting from the “Conquest” victory condition being the only one available, thus keeping everybody in a state of war,) I managed to tinker with my tiny space empire for a good couple of hours without being brutalized by a more impressive fleet. Clicking “Turn” time and again, building a fairly large fleet of fairly tiny, laser-equipped space ships to accompany my slightly-less-large fleet of Colony Ships and Constructors, researching the half-implemented yet still robust tech trees willy nilly, and, of course, exploring the not-so-empty vastness of space with a handful of scout ships was all the fun I needed.

One of the new additions is the Ideology tree, which is lightly reminiscent of Civ V‘s Social Policies. You’ll make pseudo-morality decisions throughout the game, such as when you’re colonizing a new planet – Do you want your colonists to mingle with the native Pod People? It causes your people excruciating pain, but makes them slightly smarter. – and accrue points towards Benevolence, Pragmatism, or Malevolence. You’ll spend these points to advance through these Ideology trees to pick up the perks most relevant to your playstyle. It’s a refined Alignment system, much like you saw in GalCiv II, with an associated tech tree. If there’s one thing I can never get enough of in a strategy game it’s Tech Trees, so this is a very welcome addition.

The races in this build are limited to four of eight planned playable factions, including one new face, the Iridium faction. As you might expect, each race has its own unique perks and scattered bonuses for industry, research, population, and more. Like the Ship Builder, which has not yet been implemented, Custom Races aren’t an option in this build either, although it is almost certain that the feature will be available eventually. Customizing your GalCiv experience through custom races and ships is a big part of the fun, so even though I know it’s coming, I still missed it in the alpha build.
Sadly, I was not able to coordinate to play around with the Multiplayer, but the fact that it exists in this early a build is indicative of a fairly heavy focus on the MP side of things. Do keep an eye out for more multiplayer-focused coverage in the future, though, as I do intend to take full advantage of its existence in the coming weeks.

Ultimately, I’m cautious of saying too much about how fun the Galactic Civilizations III alpha build is. I had a really good time with it. I got sucked into the “one more turn” mentality for hours. It’s got barely half of the features implemented, and it still had me hooked. Sure, I’m a sucker for this franchise – and strategy games in general – but if they can make a half-realized game this much fun, I predict that the game we see at launch will be something for practically every strategy fan out there.