ARROWGAMÉ (pronounced “arrow-gah-may”) follows a grand tradition of games of battle, and achieves a zen-like balance of aesthetics and destruction. Two forces stand opposed, seated, with an index card between them. Playing is poetry. Each time the card is creased, hell breaks loose on the lined battlefield. Arrows against arrows. It is gruesome to watch, and yet I cannot look away. Here’s a haiku:

Fold the card of war:
Arrows rain down upon it-
they all point to death.

Setting Up:
Fold the index card in half the short way (Image 1), and have both players choose a side. The crease down the middle of the card represents the center of the battlefield. You’ll be using the lined side of the card to play. Choose a player to go first.

How to Play:
ARROWGAMÉ is a game about drawing arrows. Each arrow you draw goes up against your opponent’s arrow on the opposite side of the index card. The object of the game is to have the most arrows remaining after the “battle.”

The first player draws 10 arrows on his side of the index card in a straight line (Image 2). Don’t let your opponent see your arrows!

The second player then does the same on his side.

After both players have drawn their arrows, unfold the index card to compare arrows (Image 3), score, and see who won. Don’t worry, there’s more explanation below.

How do the Arrows Work?
Understanding the arrows in ARROWGAMÉ may seem daunting, but it’s really simple.

ATTACKING ARROWS:
Anytime an arrow is pointing directly at an enemy arrow on the battlefield, that arrow is attacking.

Normally, an arrow has an attack power of 1. If two arrows attack each other, they cancel each other out and both get destroyed (Image 4).

REINFORCING ARROWS:
If there’s one thing arrows do well, it’s pointing to each other. When your arrows point to your other arrows, they reinforce them and make them more powerful. Each reinforcing arrow adds +1 attack power. Remember those two arrows that destroyed each other? What if one was reinforced? (Image 6).

FEINTING ARROWS:
Any time an arrow is pointing in the opposite direction of the battlefield, that arrow is feinting. If attacked, a feinting arrow isn’t destroyed. Instead, it counter-attacks and destroys the attacking arrow, regardless of the attacking arrow’s attack power (Image 8).

If it’s opposite a non-attacking arrow, however, the feinting arrow feints for no reason, and, humiliated, destroys itself (Image 9).

Next page: How to Score a Game

How to Score a Game:
The 10 arrows drawn by each player in ARROWGAMÉ can be seen as 10 fighters, who each pick one move to perform and perform their moves all at once. All attacks, reinforcements and feints occur simultaneously. So we score them as if they all happened at the same time.

Holding the index card horizontally and starting at the top, determine the attack power of each arrow, and scribble out any arrows that have been destroyed. Here’s an example to help you understand scoring.

Rules for Extended Play:
ARROWGAMÉ can actually be played for as many rounds as lines on one side of an index card. The game does get more complicated after the first round, but the basic rules stay the same. An example of a complete game might look like this: 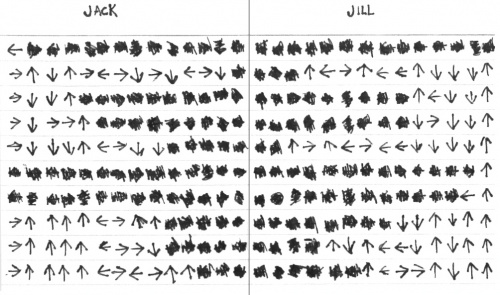 In addition to the basic rules, a few additional rules need to be considered in order to play beyond the first round:

The best way to learn ARROWGAMÉ is by playing, so find an index card, find a friend, and get folding.

Concept:
The concept for ARROWGAMÉ goes back to June of 2006. My original idea was to create a game that could exist entirely on the surface of an index card. The inspiration for this concept came from the Surrealist game Exquisite Corpse I wanted the game to be extremely minimalist, but I also wanted the waste of the game to be worthwhile as an art object with its own aesthetic sensibility.

Design:
The pre-printed lines on an index card have always suggested to me that the two players -each using his side of the folded card – should draw 10 arrows for each round. In its earliest stages, the game would play out in a series of rounds, with each having the players fold the index card in a separate place, depending on who won the last round. The problem with this setup was each round was based entirely on luck; there was no way to strategize. I later observed that the strategy of the game could come in later rounds, if those later rounds were based on the results of earlier rounds.

For this reason, I decided ARROWGAMÉ players would only fold the index card in one place, and they would re-fold the card there every round. Arrows left over from previous turns would be part of the strategy, making the game increasingly complicated as time went on. The layering method of gameplay meant the role certain arrows played – attacking, feinting, reinforcing – would change depending on the arrows around them; an attacking arrow could be reinforcing, for instance, if an arrow from one round earlier in the same row was also attacking.

The rules of this more complicated form of ARROWGAMÉ were logical enough to me, but they were incredibly complicated to explain. Indeed, the biggest challenge in developing such a minimalist game was the complete lack of minimalism in the rules.

Result:
From my own personal play experience, the game plays at a casual pace. Taking turns drawing 10 arrows at a time, it’s easy for players to be engaged in other tasks while playing. The fun in the game comes from unfolding and witnessing the relationship of arrows to other arrows.

Just as I had set out to do, the result of the game has a unique beauty. It’s an incomprehensible series of arrows and scratched out areas to the uninitiated, but for players of ARROWGAMÉ, it represents a sublime battle. The artifact the game creates almost carries more weight than the act of playing itself.