a card game for the graveyard shift 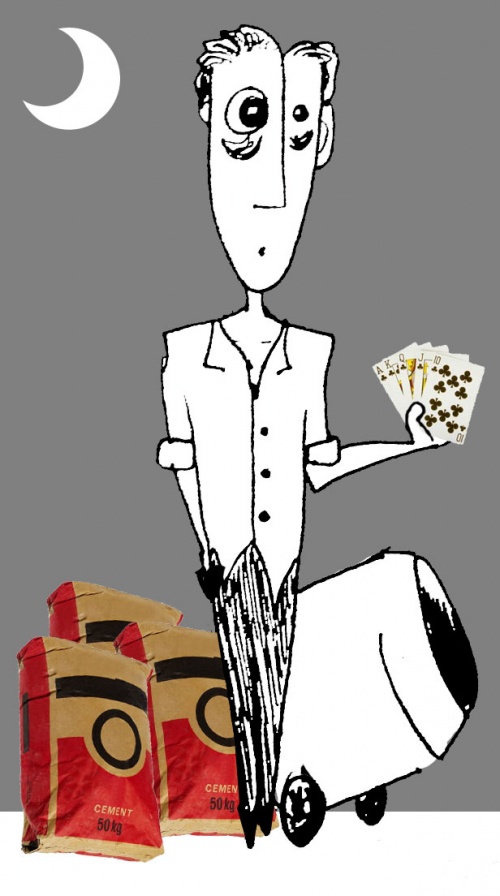 Nobody likes zombies – especially not the living. To prevent zombie outbreaks, cemetery owners hire Fillers, individuals who pack suspicious graves with concrete to prevent the undead from rising.

As a Filler hired to take care of a particularly troubled area, your job is to sniff out the bad graves and fill them in before the zombies awaken. Sadly, hard times have fallen on the town, and there’s not enough cement to completely fill every grave. To make matters worse, the graveyard keeper has his eye on you, and one too many escaped zombies will mean you and your trusty cement mixer will have to find work elsewhere.

And with the human population dwindling, it’s just getting harder and harder to find honest work these days.

The Filler’s objective is to keep his job. If four or more zombies escape from their graves during the night’s work, the Filler is fired, and the zombies win.

How to Play:
Each round, the zombie player lays down three graves, and the Filler must choose which graves to pour cement into. 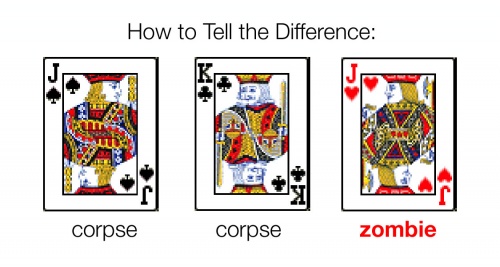 At the beginning of each round, the zombie player chooses three cards from his hand and plays them face down in a row. Each card is a grave.

Once he’s done that, the zombie player’s turn is over.

The Filler’s turn:
Once the zombie player has laid out three graves, the Filler must decide which graves to fill in with cement and how much cement to use. 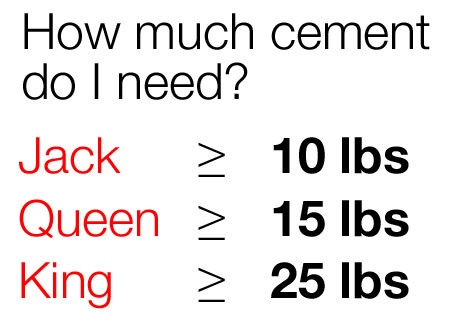 There are three different types of zombies, with varying amounts of strength. More powerful zombies require more cement to keep them buried.

The values on the number cards in the Filler’s hand represent pounds of cement, and the Filler can use any combination of cards on any grave to accomplish his task.

The Jack requires 10 pounds of cement to prevent escape, the Queen 15 pounds and the King 25. A grave can be filled with more than the minimum-required cement, but using less than the minimum for any zombie will allow that zombie to escape.

To fill a grave with cement, the Filler plays cement cards on top of that grave, face-down. The Filler does not have to fill every grave and can choose to save his cement.

The Reveal:
After the Filler has played his cards, the zombie player flips over the three grave cards, one by one, revealing which ones hold zombies and which ones don’t.

Then, the Filler flips over his cement cards, revealing how much cement was poured into each grave.

Zombies whose graves were not properly filled escape the cemetery. Place any escaped zombies in a row off to the side, face up.

Repeat for four rounds, or until the Filler loses his job.

Next Page: Designing The Filler

Concept:
This month’s game started out as something entirely different and far more complex. But since what I was working on was so complex, I couldn’t finish the game by deadline and needed a filler game to use this month.

Given the time constraint, I knew I needed something thin in terms of required pieces and simplistic in terms of play. I decided to approach it from a thematic direction, so I opted to take the “filler” idea literally.

The nice thing about this methodology was I already knew the name.

Design:
Originally, The Filler was going to be a dice game, with the rolled numbers indicating how much cement would be poured into each grave. But dice were too simplistic for the number of tasks I had in mind: I wanted one player filling the graves, and I wanted another player acting as the zombies trying to escape. Accomplishing all of this by rolling the same die over and over would be putting too many metaphors on one object.

Once I abandoned dice, I began to think about using a deck of playing cards. In some ways, working with standard deck of 52 cards is daunting; the sheer number of games already designed for that singular construct makes it hard to innovate, and any innovation is inherently working against established metaphors.

Still, I never cared much for poker, and the limitations of a predefined deck would help force me in a clear-cut design direction. Immediately I knew the zombies should be represented by the red face cards, non-zombified corpses by the black. The number cards would be my cement, and a playing card is already the perfect dimensions for a grave.

I rant into problems mostly in the numbers game. Deciding that Kings, Queens and Jacks would all require different amounts of concrete was easy – figuring out just what those amounts were was far more difficult. The decisions weren’t arbitrary; they were based on numerous factors, from the total sums of cards in a deck to the sense of how much was “too much” when it came to doing arithmetic in your head.

From the start, The Filler was clearly a game about resources, and I hadn’t ever designed a resource game before, which means play testing was really important. Each play test helped refine the values at the game’s center. The entire design hinges upon how much cement is needed to incapacitate each zombie. Once I perfected those numbers, I knew I was finished.

Next Page: The Result

The Result:
The Filler can be a challenging, fun game when players act as the titular character, but the enjoyment of the zombie player’s role seems largely contingent on the person playing. Admittedly, this is probably because the two roles are not perfectly balanced: The zombie player acts out a more automated role, while the Filler is clearly the star of the show. Still, I enjoyed both roles equally, though I may be a bit biased.

During the design process, I often relied on a solitaire variant of the game, whereby the sole player would take the role of Filler and would simply shuffle the corpses and zombies and deal out three random cards each round. This mode proved that the zombie player’s role could simply be automated without affecting the game’s flow.

A large part of the game’s pseudo-strategy, however, relies on both players trying to second-guess each other. Rock, paper, scissors is fun, but only when both you and your opponent are over-thinking your decisions. Playing rock, paper, scissors against a computer is pointless, because the result is always random. The same goes for the zombie player’s role: It’s more a mental game than a strategic one, which is ironic because zombies have never been cast as thinkers.

Still, that’s not to say that the zombie role is without its own strategy. In either position, I designed the gameto allow players to keep track of each other’s resources. If you’re the zombie, you’re paying close attention to how many cement cards the Filler’s used so far. If you’re the Filler, you’re watching carefully to see which zombies are left in your opponent’s hand. When push comes to shove, I’m very pleased with how the game turned out, even if it is merely filler.

Scott Jon Siegel is an enthusiastic game designer, a professional blogger, and a mediocre cook. His words and games can be found at http://numberless.net

“The Filler” illustration by Bonnie Ruberg.