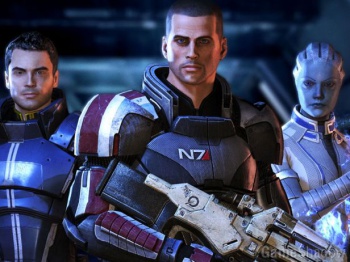 Shepard’s war with the Reapers may continue in BioWare’s next single-player addition.

BioWare may have tied up some loose ends with its Extended Cut DLC, but that doesn’t mean it’s finished with Mass Effect 3. Game producer Mike Gamble hinted on his Twitter account that more content was in store, tweeting, “Would now be a good time to talk about how we’re doing more DLC in the future?” He later added, “That was a trick question. We’ll save the future DLC for future chats. Don’t worry though … there’s much more.” The fans, impatient creatures that they are, evidently decided to bypass those “future chats” and cut to the chase, digging up some juicy details on the planned DLC. Naturally, beware of Mass Effect plot spoilers below.

An enterprising member of the BioWare Social Network stumbled across a file within the 1.9GB of Extended Cut data which seemed to contain text from dialogue not currently in the game. The script revolves around a rogue Reaper called Leviathan, which has betrayed the Reapers by killing one of its own and now acts as a defector from the invading army. Shepard’s mission is to rescue Ann Brynson, a scientist trapped in a mining colony that has been indoctrinated by Leviathan. Depending on Shepard’s actions, the traitorous Reaper may end up as an ally in the final battle for Earth.

The script includes new lines for each of Shepard’s companions that help shine some light on the details of the mission. One line, which appears to be delivered by EDI, implies that the mission may reveal new information about the Reapers’ creators, a topic mostly untouched in the series so far: “So the Reapers did not fully exterminate their creators. That suggests they are fallible, even on large or long-term scales.”

The name Leviathan will be familiar to fans of the series. Back in the first Mass Effect, players could scan the planet Jartar in the Dis System to discover the corpse of a massive “living starship.” In Mass Effect 3, players who completed the Bring Down the Sky DLC encountered a Batarian named Balak who implies that the so-called Leviathan of Dis was actually an inactive Reaper. At some point, a Batarian science team accidentally woke it up.

BioWare has not confirmed anything, but the text in the game files makes the details pretty clear: Commander Shepard’s adventures aren’t over just yet.