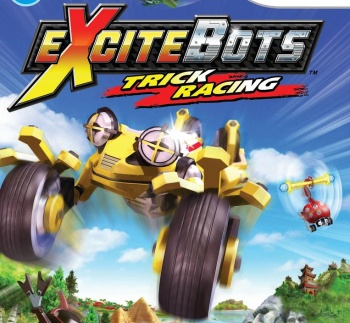 “Hey little man — this station’s open!” I am still just loving the Nintendo booth attendants, and really, I mean that — they were great. So enthusiastic!

See, it doesn’t really matter whether I am female or not when I check out videogame demos. It just matters that I pay attention and try not to crash my transforming ladybug robot car into a tree.

Excitebots: Trick Racing is a sequel to Excite Truck, albeit a super zany sequel — more Mario Kart than straight up racing. Everyone likes to throw pies at clown faces, sic homing dentures to chew on their opponents, or play Poker and race at the same time, right? …like I said, super zany.

In addition to the ladybug I raced with, I also got to see the bat bot. We weren’t privy to the precise number of vehicles in the game, but there will certainly be “quite a large amount,” some of them unlockable as you progress. Each bot also has “quite a large amount” (I could see him reading this line off the wrinkles in his brain) of transformations. For instance, when we ran through a wrench in the track, our bots sprouted legs so we could run and jump off a ramp; once you’re in the air, you sprout glider wings and can tilt around to achieve a perfect landing. Of course, general steering is all Wii Wheel, too.

No plot needed in this racing game, just a steady climb to the next circuit level. The races take place all over the world, not in cities, but in nature: tundra, jungle, forest, volcano, tropical… and “Scotland.” Our demonstrator also mentioned there would be some surprise areas, too, no doubt as off-the-wall as the rest of the game seems to be.

Excitebots: Trick Racing could actually be a pretty sweet battle-racer once you get the hang of the tilt controls; six player Wi-Fi races (2 player local) seal the deal. I’m looking forward to unleashing this game – especially on kids – when it comes out April 20th.