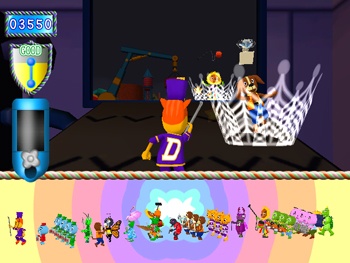 Major Minor’s Majestic March, the latest game from Parappa the Rapper creators, NanaOn-Sha, hit shelves last week while it was still March — “The last day!” and we got a chance to talk to NanaOn-Sha President Masaya Matsuura, about that game and what else they’ve been up to.

“Basically, we had the chance to make a Wii game, so the platform was basically set. I spent kind of a lot of time thinking about the basic game functions. Many Wii gameplay [elements] expect physical input via imagination with real action like a baseball bat, tennis racket, or something like that,” he explains. I thought the marching baton would be good to control the music, but if we only did that, then that would be just conducting the marching band, so we needed some other functions only games can have. So, we decided to use waving the Wii Remote to scout members in the street. These two functions combine, so basic game functions are set.”

Despite some experience in elementary and junior high experience with marching bands, Matsuura, primarily a keyboard player nowadays, looked to contemporary American bands for inspiration. “…current marching bands, especially college bands, look very different from the old school band. I had to learn much about that to make this game,” he says.

The main gameplay ended up being a rhythm game where “you have to keep the music BPM [beats per minute], but you have to find the right BPM by watching the overhead indicator. Each member you scout has their own favorite BPM range; some people don’t like to play too fast, some people don’t like to play too slow. So, you have to find an in-between for everyone — good balance. Also some band members are short-tempered, so you have to take care with these kinds of characters.” There are 30 different characters in the game, his favorite being the goldfish, but it, “looks impossible to hold the cymbals.”

Developing for the Wii was obviously different compared to NanaOn-Sha’s previous work on PS2. The core development staff was just 10-15 people (NanaOn-Sha generally being around seven), but adding in everyone who pitched in up through the Q&A process, the end total is somewhere around a hundred.

That’s nothing compared to the 200,000 wav files on the disc. “We have seven stages and five stages are made from traditional, famous marching songs, but we picked around 30 songs for five stages and made a medley for each stage. Of the other two stages one is licensed [Herbie Hancock!] and one is my composition.”

We talked briefly about the Japanese name for Major Minor, Meja Maji: “For me, the most difficult part is naming the characters. Originally, his name was Major Minor, but at this time we only show the subtitles on the screen in the story parts…[so] if we named him a very different name in Japanese then the Japanese audience can’t imagine him, so we decided his name would be Mejama-kun in Japanese. ‘Mejama’ sounds almost the same as Major Minor, so if they listen to the narrator’s ‘Major Minor’ they will not have any strange feeling when watching the subtitles.”

Matsuura wasn’t able to tell us much about the team’s “secret project,” but clearly stated that he’s not done innovating in the rhythm game field, “I have to make some advanced gameplay with the new title. This is a very big mission. And also I believe that rhythm-based games are one part of the huge undiscovered music based game area. Just rhythm based games is very, I dunno how huge is it, but certainly that is a part, so I have to advance territory in music-based games.”