An unexpected announcement today came out of a LAN UT tournament, where D.L. Com, a beloved – some would say revered – figure in the PC Gaming community, took to the stage to make his intentions known.

PC Gamers, we’ve been relegated to the basement long enough. The console peasants mock us for caring about quality, while they guzzle the firehose of mediocre mobile ports, screaming futilely at their Kinect. Let them live in 720p. We are better than that, and we deserve better than that.

But it’s not enough for the PC Gamers of the world to finally see the respect we deserve. We must embrace all gamers, welcome them into the fold of the Glorious PC Gaming Master Race. Whether they want it or not. Many of us, our sons and daughters, our friends and loved ones, they were console peasants once. The neo caste system is self-selected, and we should be eager to help elevate the peasants, once they’ve seen the light of a 10^23 contrast ratio. 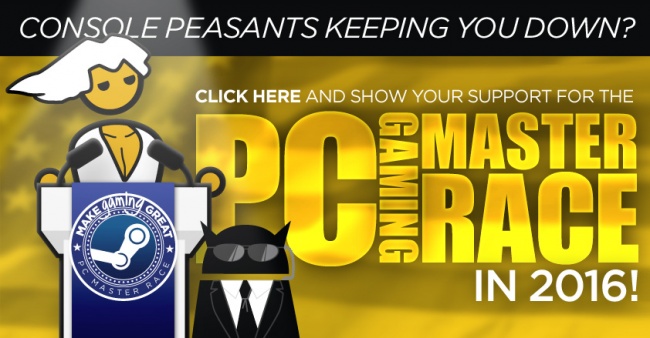 While much of the room never took off their headset, those that did immediately lost their matches, and were promptly escorted from the room by several short, suited creatures to raucous applause from the players and speaker alike.

Have you ever met a real Gamer that just stops in a the middle of a tournament match? I didn’t think so. Show ’em why braided cables are best cables!

The room was oddly muted, but there seemed to be a consensus of support and banter in voice chat. It’s an interesting day for democracy, a day that may forever change the political landscape of the country. As the security imps lifted the orator on their shoulders and began to carry him away, he yelled over his shoulder,

As staunch supporters of PC gaming, we at The Escapist put our full weight behind this upstart candidate. If you want to get involved, now’s your chance! We’ve decided to help out by coming up with some slogans and taglines, but we seem to need your help to do that, because it turns out we’re really, really bad. Download the banner here, toss your own slogan into the text area at the top, and post yours in the forums! If you’re not much for graphics (I never touch the stuff myself.) just pop into the forums and share your slogan in old fashioned text format there!

We’re also interested to hear what you think the most important topics of debate are in the arena of PC Gaming legislation. Get to the forums, bring your friends, and let’s get this candidacy party started!