Once upon a time, people used to ask me what type of games I like, and I used to be able to answer them. Now I can only tell them what I don’t like – real-time strategy games for one, turn-based strategy games for another – because these days it’s easier to define games by what they are not, than what they actually are.

It probably won’t be long before the question itself will be all but irrelevant for the everyday gamer. For example, what kind of movies do you like? Well, I like fantasy – but I hate Twilight. I like comedy – but not all those ridiculous teen ones. In fact, I like pretty much every kind of movie, so long as it’s good – and bit-by-bit, games seem to be going down the same path. What works, works.

The blockbuster-ization of gaming has been an increasing trend across all platforms since around the launch of the Xbox 360. In any given two-week release schedule there is now a certain title that will be consumed by all types of gamer and dominate the headlines, often to the detriment of smaller, more niche titles (this week is God of War III‘s turn). Thus, while sales of Xbox 360 hardware are not spectacularly greater of those of the original Xbox, there has been a vast increase in the number of million-plus selling titles. And by the same token, games that don’t make the top 20 are usually all but doomed to failure.

Modern blockbusters are blending so many different genres and modes that the distinctions between them are becoming meaningless. Are Assassin’s Creed 2 and Uncharted 2 in the same genre, for example? I would say yes – they are both third-person action games with a heavy emphasis on platforming and strong narrative. You could also point to their differences – Uncharted’s linearity versus AC2′s sandboxing, the former’s shooting and the latter’s stabbing – but to the average consumer, the difference is as meaningless as that between doom metal and thrash metal are to me.

Gaming’s narrow genres were never so much defined as stumbled upon by accident. Successful titles were aped shamelessly – Dante’s Inferno may well be a shameless copy, but it’s the kind of game that was commonplace back in the 8- and 16-bit days. Titles that only made the slightest changes to existing templates could still be very successful, and these became the genres we grew up with. Mario gave birth to Alex Kidd, Sonic, Mega Man, titles that would come to define the platform genre; later, Mario 64 spawned Banjo-Kazooie, Sonic Adventure and laterally series like Jak and Daxter or Rachet and Clank, games that defined their own 3D-platformer genre.

In a medium where you can create almost literally anything that your mind conceives, there is safety and comfort in tried-and-true conventions, both for publishers, but also for developers.

However, evidence seems to suggest that consumers pay very little attention to genre, much less mechanics. The average consumer has a very instinctive like/dislike reaction to games – in other words, they don’t know much about art, but they know what they like. (It goes without saying that the type of person reading this article is not the type I am talking about.)

To the average consumer, there is surprisingly little difference in performing an assassination in Assassin’s Creed 2 or taking out an enemy via sniper rifle in Modern Warfare 2. Though the more experienced user will struggle to see the similarities, to an inexperienced hand a well-implemented cycle of challenge-success-reward works on a very similar level across many types of game.

This week sees the Western launch of Final Fantasy XIII, a game that has bravely – but not altogether successfully – tried to pare back the RPG elements the series is famous for in favor of a more basic, linear experience. Presumably, Square Enix hopes this will appeal to today’s instant-gratification user – and perhaps the reason they saw the need for this is that RPG-ness is no longer the sole preserve of the RPG. 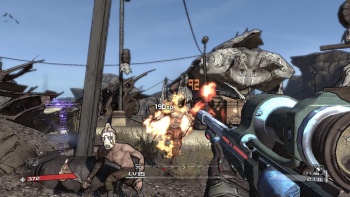 While it was common until quite recently to argue that action gamers and RPG users were like polar bears and penguins – shoved into the same category but actually worlds apart – games like Fallout 3, Mass Effect 2 and Borderlands have proved one or both of the following: that shooting mechanics can appeal to RPG users, or that RPG mechanics can appeal to shooting users. Nobody’s quite sure which, but it seems to work.

And yet while shooters are becoming more RPG-like, RPGs are ditching their RPG-ness as fast as you dump crappy Level 1 armor. “I’m not sure I even call Fable an RPG anymore,” seems to think that “the future of shooters is RPGs”, and with the continued success of Borderlands – a new IP with a risky visual style, which is usually the kiss of death – who could argue?

Games these days are becoming ever more about the polish, less about the “gimmick”. Games that follow the “[recent hit title] with a [gimmick]” formula no longer seem to perform so well – suggested by the relative disappointment of THQ’s Darksiders. This suggests to me that gamers care less about the “uniqueness” of a single game’s mechanics, and more about the sheer enjoyment of an in-game experience. A game like Dragon Age: Origins has very little original, but everything in there is polished to a very high degree.

Last year’s most praised title, Uncharted 2, is the prime example of this: Uncharted is a mish-mash of genres with barely a single original idea to call its own, but that doesn’t matter. Its production values are off the charts in every aspect, and as a single, ten-hour experience it’s very hard to beat.

Anyone who has read this column will know that I am an advocate for the average gamer, and in this respect I welcome a greater mix of genre and titles that go for broad appeal. This is pretty much the opposite of what happened to the 2D fighting genre – which got too hung up on its own intricate mechanics, and in refining those ever further it appealed more and more to the hardcore. In reality, most of the kids who made Street Fighter II and Mortal Kombat a success knew very little about the mechanics other than on an instinctual level, and just enjoyed the feeling of beating their friends up.

The genre is only just recovering from that mistake – and games like God of War have largely filled the gap in the meantime (to follow up on last week’s God of War In Space idea, a two-player game based on God of War-style mechanics is just begging to be made, surely. Go ahead, you can have that one for free).

Admittedly, there is a danger that in trying to be all things to all people, unique experiences will suffer – whereas once Borderlands and Mass Effect 2 would have felt like two completely different experiences, and attracted two completely different types of gamer, now you have a choice between an RPG with shooter elements and a shooter with RPG elements. (I’m not actually sure which description is for which.)

But overall I say, let our unhelpful notion of genres die – or at least fade into the background. Far too many titles cling to archaic mechanics because of an absurd notion that such-and-such a genre “needs” them. Gamers are showing with their wallets that they just want to have fun.

Christian Ward works for a major publisher. The bouncer-types have not come for him yet.