By the time you read this, I’ll have seen (and reviewed) James Cameron’s Avatar, but as of this writing, I haven’t yet. This column isn’t so much about the movie as it is the oddly negative vibe it had been receiving up until about a week before it came out.

However Avatar winds up performing at the box office, after it’s gone from theaters people will be analyzing exactly what Fox did “wrong” in marketing it to earn so much negative buzz before it had even been seen. Were they too cautious? Perhaps Hollywood has already forgotten how to sell a genre film that isn’t based on a pre-existing comic, cartoon, book or toy?

One thing is certain: The moment the intangible “meh”-ing of Avatar‘s pre-release crystallized was with the debut of its trailers, which brought with them the revelation that the film’s top-secret plot seemed disappointingly conventional. A sci-fi/fantasy spin on the well-worn Post Colonial trope of the conflicted soldier who takes up arms against his own to fight for the “primitive” tribal society he was supposed to be helping eradicate – in this case, mecha-piloting space marines versus blue-skinned aliens. Or, as South Park‘s Trey Parker and Matt Stone ironically immortalized it, “Dances With Smurfs.”

At this point, it certainly doesn’t look like “strikingly original story-outline” will be on a list of Avatar‘s strong suits. Still, as funny as that South Park bit was, the fact is Dances With Wolves hardly owns a patent on the “White Man fights for the Indians” hook; and Battle for Terra didn’t invent applying it to science-fiction. The theme of the civilized protagonist achieving heroism by going native is an ever-evolving one, and it’s been part of genre fiction for almost as long as there’s been such a thing.

In the broad strokes, it all goes back to Colonialism – the unpleasantly-complicated “yeah, but” to all of Western History and an unignorable aspect of Western fiction. However one chooses to approach it, Colonialism and the storytelling tradition of brave men venturing into exotic lands are permanently linked. British fantasy-adventure tales of treasure-seekers exploring lost continents were the romanticism of the British Empire’s colonial exploits in Africa, India and The Americas, and such fantasies helped drive the very exploits they were inspired by. One can easily chart the West’s shifting attitude toward this part of history by watching how the books and movies depicting these fantasies evolved. 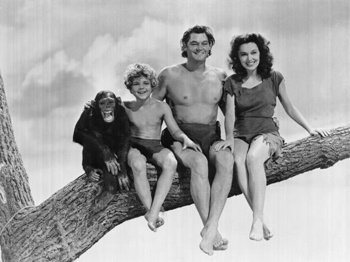 A good starting point is the work of Edgar Rice Burroughs, specifically his two most famous fictional heroes: Tarzan the Ape-Man and John Carter of Mars. Tarzan is an heir to English Lordship lost in the African jungle and raised from infancy by apes. Carter is a Civil War veteran transported to Mars, where becomes a warrior and wins the affections of a red-skinned native princess. (Full disclosure: I love this stuff. Burroughs may be my favorite author of this particular period and genre.)

Being works of their time, both are tinged with hints of subtle (and not so subtle) societally-ingrained racism. “Tarzan” is wholly-accepting of the idea that an English Lord – even without knowledge of his lineage – will naturally become king of wherever he happens to be. But it’s also unmistakably romantic about the glamor of Tarzan’s tree-dwelling “native” existence versus the “civilized” society back home. The 1930s “Tarzan” movies turned this subtext into the main story: It’s abundantly clear that Maureen O’Sullivan’s Jane finds the prospect of shedding her civilized inhibitions (and clothing) to live as Eve to the Ape-Man’s Adam more than a little agreeable.

Meanwhile, one of the many reasons the “Mars” books have never been successfully filmed (the Pixar boys will be trying next year in their first live-action outing) is the sticky detail that no one on Mars wears any clothing, save for belts to carry weapons. Primitive life, it seems, has a lot to offer the displaced white hero – so long as he gets to be in charge, of course.

Then there’s the jungle-adventure yarns of H. Rider Haggard, who’s prototypical colonial-hero Allan Quatermain could be called the grandaddy of Indiana Jones. He’s less fantastical than the ape-raised Tarzan or interplanetary-immigrant Carter; a British big-game hunter among the natives of Africa. As such, the endorsement of Colonialism as a net-good (“gotta civilize the Dark Continent!!”) and implicit racism are a lot harder to overlook. Still, it’s not a whitewash: Quatermain’s preference for Africa over the rigidity of Victorian England is a constant theme, as is his admiration for the warrior-ethos of his tribal friends and distrust of institutional colonialists. There have been two noteworthy films made of the Quatermain adventure “King Solomon’s Mines” – a pretty damn good one made in 1937 and a somewhat silly version made in 1985.

It was the adventure-fiction set around Colonialism in the Americas, however, where things began to get complicated. Though the theme of demonizing the “Savage Other” was as prevalent as ever, something about Native Americans struck a chord in Colonial Fiction – resulting in native hero characters that had few equivalents in the similar fictions dealing with Africa or India. If you caught Inglorious Basterds over the summer, you may recall several references to “Winnetou,” the Apache hero of a series of novels by German writer Karl May.

Of greater-frequency was the native-raised or half-Indian white hero archetype, most notably in the stories of James Fenimore Cooper, who devoted five books to the adventures of his hero Natty Bumpo – alternately known as “Hawkeye” – a white man raised by Mohicans who uses his heightened skills to fight for good in early America. Michael Mann’s 1992 film of the most famous Hawkeye story, “Last of the Mohicans” – with Daniel Day Lewis as Hawkeye – is damn-near required viewing and one of the best action movies ever made.

Baby steps, to be sure, and it’s more than a little ironic that the re-imagining of Native Americans as natural-born superheroes in popular fiction preceded most portrayals of them as ordinary humans, as if it was still mandatory to cast them as “separate” even while rendering them as “awesome.” And of course, these isolated examples of Indian (or Half-Indian) heroes didn’t mean that Western fiction – and Hollywood movies especially – didn’t cast them as stock bad guys for decades. 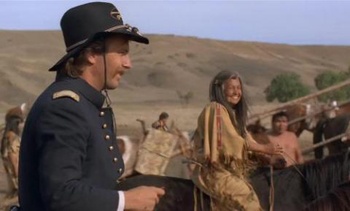 But, just as the World Wars and the end of the Colonial Era changed the shape of genre fiction in Europe, (you won’t find many non-ironic scions of Allan Quatermain in modern British fiction) the influences of an evolving society and the Civil Rights struggle specifically led to a dramatic shift in the public perception of Native Americans in the 1960s and 70s. In 1964, legendary American filmmaker John Ford made his final Western, the groundbreaking but uneven “Cheyenne Autumn,” a native-centric drama that Ford openly cited as an elegy for the real abuse suffered by Natives from U.S. policy… and from their portrayals in many of his earlier films.

A slew of Native American hero books, movies, TV shows, and so forth followed, with “good natives versus evil colonists” becoming the new dominant structure of such stories. It also quickly spilled over, in the form of metaphor and analogy, to genre-fiction. Both the books and films of “Planet of the Apes” drew strong parallels between the ape oppression of “savage” humans and the European Colonial oppression of indigenous peoples. J.R.R. Tolkien’s “Lord of The Rings” and “Hobbit” books experienced yet another pop-culture rediscovery as a new generation found a strong parallel to Post Colonial native-hero concepts in the symbolic juxtaposition of the rural Shire and the encroaching, industrially-tinged Mordor. And we must not forget the ultimate (pre-Avatar, anyway) application of this analogy in Return of The Jedi, wherein the technologically-superior Empire is brought to its knees by the forest-dwelling, explicitly Native American-styled Ewoks.

And then, of course, there’s Dances With Wolves, the massively overrated 1990 Kevin Costner vehicle that managed the nifty narrative-contortion trick of combining the Post Colonial native-hero story with the Colonial “great white adventurer” archetype by telling the story of a Civil War veteran (Costner) who comes to respect Native American culture so much he switches sides and fights with his adopted Sioux brethren against evil-to-the-core U.S. Army heavies. The film is, of course, highly notable for its unabashed sympathy for the native plight, and its portrayal of the conquest of the Native Americans as a wholly-despicable tragedy, but isn’t it odd how it feels it needs to make its main “native” hero/spokesperson a white man in order to do so? And this, of course, is the broad arc suggested by the pitch for Avatar: The Na’vi (blue alien kitty-people) are the natives, and we’ll be asked to root for them against the human Colonialists… through the eyes of a “good” human who trades teams.

Sure… just keep telling yourself that.