Long ago, videogame developers unwittingly made a monster. Ripping it from the confines of reality, they educated this monster in a world designed just for it. It learned well – maybe too well – and the creators now find themselves enslaved by their own creation, forced to please the monster’s clashing desires for new experiences and comfortable, repeated concepts.

That monster is us.

As gamers, many of us roll our eyes at the clichés that have sprung up within the industry. Every red barrel and goody-yielding crate implies a lack of inspiration on the part of developers. Why so cookie cutter? Why can’t more games try something new?

Yet playtests repeatedly confirm we depend on the very conventions we tend to mock. It’s not that all developers are lazy; some actually work with the tropes in mind and try to avoid them. When it comes time for testing, however, players often end up tripping over their own expectations. The makers of Half-Life originally tried to circumvent the use of crates as common objects in the environment, but playtesters were continually disappointed by the lack of smashable items and the ability to fetch rewards from them. Their crowbars cried out for convention.

“We worried about the crate cliché a lot during development,” Gabe Newell said in the coffee-table book Half-Life 2, Raising the Bar. “Finally, we gave up, and one of the first things you see when you start the game is a crate. We figured this was the … equivalent of throwing yourself to the mercy of the court.”

While it is partly developers’ faults for establishing clichés in the first place, we are also wired as human beings to stubbornly fall back on prior experience when facing new ways of looking at things. The concept of “functional fixedness” states that we tend to limit our views on the uses of objects based on their traditional purposes. The “candle task” demonstrates this concept and how much impact presentation has on our thinking.

In the test, people were given a candle, matches and a box filled with tacks. Their mission was to attach the candle to the wall in a way that wax would not drip onto the floor when it was lit. The answer is to secure the box to the wall with tacks and use it as a candle holder, but the majority of test subjects failed. They had not even considered the box as a tool they could use, but only as a container for the tacks. When the tacks and box were presented separately, more people solved the problem.

Although we carry some of our fixations from reality into playing games, there are rarely one-to-one comparisons. The new worlds and rules of games brought with them new learned behaviors. When players first toddled through Super Mario Brothers, for instance, one of gaming’s first tropes began to become ingrained: A is to jump, B is to shoot. As other platformers mirrored the success of Mario, the concept was further cemented. It has since become an almost instinctive setup for any older game focusing on jumping and an action, and woe to any game that tried to stray. When the Mega Man Anniversary Collection was released for GameCube, someone chose to delegate shooting to the system’s much larger A button. On the surface it seems a reasonable move – the featured button should cover the most used action. But some players will never forgive how this version “broke” the collection. To them, it just didn’t feel right. They were not willing to unlearn their expectations. 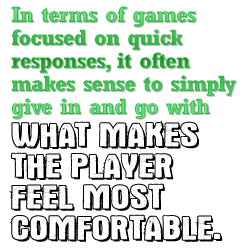 Our functional fixedness in the videogame world seems especially silly when it is parodied. In the adventure game Jolly Rover, the protagonist finds himself wishing to escape a locked room. For every object in the room, most of which would do the trick, he
finds a clichéd reason why it wouldn’t work. There is even a “crate of crowbars” which he laments he does not have the right tool to open. Even though there was a cannon in the room, everyone knows it takes a crowbar or other melee weapon to smash open a crate.

“There’s a lot of stuff going on in Bulletstorm at the same time, so it’s vital for us that the player can quickly read the environment and act intuitively,” Arcade wrote.

Other games, however, wish to give the player a deeper cerebral experience or emphasize fresh ideas. This is where developers must manipulate the fixated natures of players to teach them unfamiliar techniques or even coax them into an exotic new way of thinking.

Miguel Sternberg, game designer for Toronto-based indie studio Spooky Squid Games, has paid close attention to the ways other titles have approached the immersion of players into their innovations. Leaving a player too open to a new idea, he has found, can make them fall back on old habits.

“Brutal Legend is one of my favorite recent games, but it was terrible at teaching the player how to approach its stage battles,” Sternberg said. “Those battles superficially appeared to be RTS-like, but they actually played very differently and were easier if you took a more casual approach to the strategy. It was just luck whether you ‘got’ how to play them or not and so the game really suffered in reviews where the reviewer tried to micro-manage everything. That’s not the reviewer’s fault; that’s a game design failure.”

One Spooky Squid project, an action-platformer titled They Bleed Pixels, is currently planned to employ a two-button “jump and attack” control scheme. The challenge for the studio is finding a good way to teach players that the attack button doesn’t just initiate one move, but various effective slashes and kicks depending on direction and how long the button is held down. 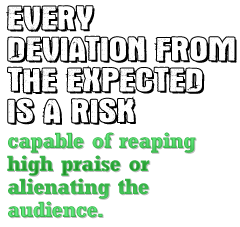 In initial testing, Sternberg left the action open assuming players would discover the moves on their own, but found most of them were following the classic platformer behavior of attacking while relentlessly pressing forward, unleashing only a fury of slashes. Testers would occasionally trigger a different move, but often wouldn’t know how they did it.

Sternberg hopes to come up with some “tricks” to acclimate players to the uncommon control scheme in the game, retaining a sense of discovery and not having to hammer the controls into players’ heads with bulky lessons. It is possible, though, that the studio will have to cut their losses, adding tutorials or another button, but Sternberg considers it part of the game-making process.

“In the end, we pick our battles and focus on what the core of the game we want to make is,” he said. “So we’ll do something traditional in one aspect of the game so that we can try something new and exciting in the other.” Trope-busting is a surprisingly difficult game of give and take where developers’ intentions must constantly be weighed and adjusted against players’ predicted responses. Every deviation from the expected is a risk capable of reaping high praise or alienating the audience.

Zack & Wiki: Quest for Barbaros’ Treasure on the Wii broke the mold by incorporating our perceptions of real-life tools into the game, making players imagine the Wii remote to be the on-screen objects they had to manipulate. It brought real-world functional fixedness into the game world, where the concepts of both could be challenged while still feeling intuitive and easy to “get.” One in-game example skips the conventional uses of an umbrella as a parachute or shield by making the player flip it over with a toss of the Wii remote and employ its hooked handle. The player must first realize the flipping motion exists in the game world, however, which Zack and Wiki points out in a previous level by giving the player a crank handle that obviously must be flipped over to fit the necessary hole. Unfortunately, not many people “got” the game saleswise, but as motion-based gaming marches on, developers may try similar ways to use our own preconceptions against us.

Until then, however, you don’t have to pity the developers who are caught in the constant balancing act of making the next new thing with enough of the same old conventions. They and their predecessors created us and must summarily tame us. But the next time you’re tempted to call out a designer on a cliché, remember the words of Arcade:

“We tried not doing red barrels, but The Customer is always right.”

Tim Latshaw is a freelance transplant from Western New York to Western Michigan. Many thanks to Miguel Sternberg of Spooky Squid Games for the insight and inspiration.