In a move that surprises as absolutely no one, Greenpeace’s Guide to Greener Electronics still lists Nintendo in last place. 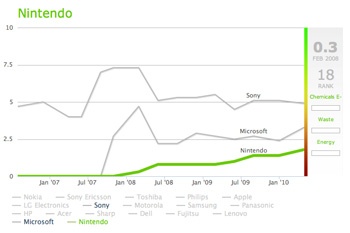 The fifteenth edition of Greenpeace’s Guide to Greener Electronics has been released for the month of May, 2010, and Nintendo sits in last place for the tenth time in a row. Of course, Sony and Microsoft didn’t do much better on the list.

The report evaluates 18 major electronics manufacturers, assigning ratings based on the polices they have for toxic chemicals, the impact their products have on the climate, and their recycling policies. A 10 point scale is used, and Nintendo scored a dismal 1.8 for this month. This is, however, an improvement for Nintendo, seeing as how the company scored a 1.4 in the last report.

A large factor for Nintendo’s repeated low performances is that Greenpeace scores a company based on stated policies. This, however, means that if there isn’t any public information about a policy, then the activist organization automatically assigns a zero to that company for said category. Since Nintendo is incredibly tight-lipped about many of its policies, Greenpeace repeatedly slaps the game-maker with incredibly low scores.

Greenpeace has been publicly critical of Microsoft and Sony, as well; the Xbox 360’s manufacturer barely did any better than Nintendo, placing 16th with a score of 3.3. This was, however, also an improvement from the January report, since Microsoft scored a 2.4 in the last report.

Sony sits much higher on the list, at sixth place. Of the three game companies in the report, Sony was the only one to have a score decrease from January, having dropped from 5.1 to 4.9.

Unsurprisingly, nobody’s commenting on their scores in the Guide to Greener Electronics, which really isn’t all that surprising. When you’re a corporation like Nintendo, you tend to care more about public thinks; seeing as how the public keeps on shoving money into the company’s hands, it’s pretty obvious that these reports aren’t affecting purchasing trends.