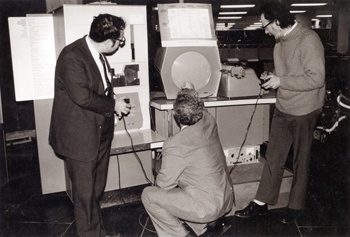 It’s difficult to impress on a modern audience how important and influential Spacewar! is in the history of computer games. Spacewar! was not the first computer game – early experiments in computer entertainment date back to 1951, when the Ferranti Nimrod was displayed to an astounded audience at the Festival of Britain – but it would introduce elements of gameplay that would still be used decades into the future, as well as inspiring some of the pioneers of arcade gaming. Spacewar! is one of the most seminal and groundbreaking games ever designed and one that would strongly influence the course of computer games for years to come.

The story of Spacewar! begins in 1961 on delivery of a brand new DEC PDP-1 to the computer laboratories of the Massachusetts Institute of Technology. The PDP-1 was a revolution in its own right – it was one of the first useful minicomputers, producing the computing power of a then-current room-sized mainframe in a package the size of three refrigerators placed side-by-side. It was easy to use, at least by the standards of the time; just a few years earlier, a computer was a behemoth that took an entire team of personnel to operate, while the PDP-1 could be turned on with the flick of a switch and operated by a single person. Most of all, though, it was relatively affordable by the standards of universities, costing $120,000 in an era where most computers cost millions of dollars. The PDP-1, and subsequent designs by DEC, would help inspire generations of computer enthusiasts.

One group of enthusiasts, Steve Russell, Martin Graetz and Wayne Wiitanen of the MIT Tech Model Railroad Club, had seen the PDP-1 in action, and they had plans for it. They had witnessed several technical demonstration programs that showed some of the potential of the computer, including a game of Tic-Tac-Toe, which got the group thinking. They had all had previous experience with computers, ones which made the PDP-1 look like a toy in comparison. They decided that they would develop their own technical demonstration – a computer game – one that would push the new hardware to its limits.

The early elements of the game were decided on quickly. It would be one of those eternal “opposites” battles, like red versus blue, or left versus right. Inspired by the fantastical space battles of the Lensman science-fiction series by E.E. Smith, the two aggressors would be two spacecraft, the “Wedge” and the “Needle,” and the aim would be to destroy the opponent using a supply of missiles while avoiding enemy fire by moving around the screen using the spacecraft’s rocket thrusters, which had limited fuel to encourage strategic use. For truly desperate situations, a hyperspace mode was devised, which could save a player from the brink of destruction, but thanks of the random nature of the hyperspace feature, it could not be relied on.

By February 1962, a barebones model of the game had been developed, programmed by Steve Russell. It was missing many of the later features that would dictate the gameplay and aesthetics of the game in years to come, but the concept worked. With this in mind, the group began working, along with other enthusiastic members of the Tech Model Railroad Club, to more fully develop the features.

The gameplay of the early model of the game was fun, but lacked strategy. A new element was required to prevent it from going stale, and it is this very element which cements Spacewar!‘s place in gaming history as more than just another early technical demonstration, but a fully-realised game in its own right. 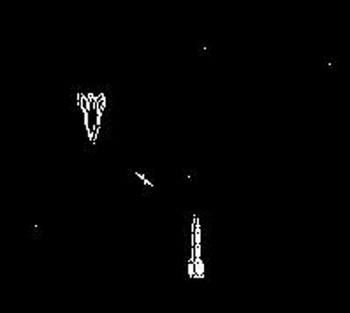 That element was the implementation of a star, placed in the middle of the playing space, which not only provided an obstacle to be avoided, but also created a gravity well that would constantly draw the spacecrafts towards it until the players broke free. However, the star produced new gameplay possibilities. While novice players would be preoccupied with avoiding the gravity well, advanced players knew how to use it to their advantage, slingshotting around the star to gain momentum.

However advanced and well-balanced Spacewar! was, however, it would have been just another footnote in the history of computer games instead of the huge influence it was if it hadn’t been for a few key characteristics of its development. The first of these was the computer for which it was designed. The affordability and relative ease-of-use of the PDP-1 opened up the computer market to a much larger proportion of the universities in the United States, and while any previous games had been designed for computers whose cost made them relatively rare, the PDP-1 sold in hundreds; unprecedented numbers for the computer industry.

The second characteristic was that the source code was never patented, remaining in the public domain to this day. Of course, programs weren’t patented during the 1960s; the real money in computers was selling the hardware, not the software. Because of this, the code that Steve Russell had slaved over for months was copied and given out to anybody who wanted it, spreading the game to universities across the United States and causing a sensation everywhere it went. The game became so popular that DEC even included on every PDP-1 it sold.

As more and more people came in contact with Spacewar!, many were inspired to try their own game projects, in the same way that those early demonstration programs had inspired the members of the Tech Model Railroad Club. Some programmers changed the source code, producing variants of the game, others developed versions of the game for later DEC computers, while others began to consider their own games.

One of the players with his own ideas was a young electrical engineering student named Nolan Bushnell. Attending the University of Utah, he saw the game in action, and was struck by the financial potential of computer games if they could be brought to a larger audience . His ponderings resulted in Computer Space, a coin-operated version of Spacewar!. Without Spacewar!, there would be no Atari, there would be no breakthrough hit for the games industry, and the course of computer game history very well may have been changed utterly.

Why was this game constantly updated and redeveloped for so long in the world of gaming? Simple answer: the gameplay. Not only had Steve Russell created one of the first multiplayer games ever, he had also created one of the fairest and most balanced multiplayer games in existence. With its ostensible simplicity and its hidden depths of strategy, Spacewar! not only kept people playing to the point of mastery, but also managed to make it that even novices could play and have fun with it.

Spacewar! is nothing less than a triumph. Not only can it claim to be one of the most important computer games ever devised, it can count itself as a timeless classic. Still fun to play almost fifty years after it was developed, Spacewar! deserves more recognition than it gets.