We’re in our fourth year now of publishing The Escapist, and, as editors, we’ve published our “Editor’s Notes” on just about every topic imaginable – 221 of them, in fact – and yet we still keep finding new ones. Sometimes, however, a topic is just far enough outside of our experience, we need to call in an expert. That’s why, starting this week, we’ll occasionally be opening our doors for a “Guest Editor’s Note.”

For this week’s Issue of The Escapist, “Queer Eye for the Gamer Guy,” we asked Flynn Demarco, Editor-in-Chief of Gaygamer.net to share his experiences and be the first to break ground with a Guest Editor’s Note. Flynn graciously accepted on extremely short notice and we thank him for his insight. 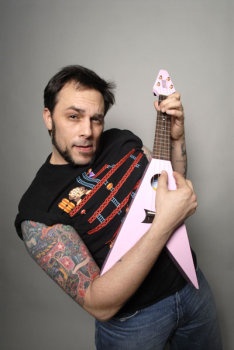 I have been gaming since age 11 when I first received my Atari Video Computer System and I’ve been gay since long before that. However, being gay and gaming wouldn’t cross paths in a public way until nearly 28 years later when I started GayGamer.net. As a lark, I decided to write a series of articles called “The Top-20 Gayest Game Characters” which was a mixture of actually documented gay, lesbian and transgendered characters and some thrown in just to be cheeky. Had I known it would put us on the map, I might have been a bit more responsible in my writing and only stuck to the factually documented characters. But then again, I have a sense of humor about my sexuality and myself and had no problem camping it up a bit when I felt it was in good fun. Still, researching those articles made me realize exactly what place “alternative” sexualities hold in the world of gaming.

Until very recently, homosexuals in games were mostly treated as limp-wristed sissies, jokes on the player or sometimes, as in the case of lesbians Hana Vachel & Rain Qin in Fear Effect 2, an enticement for the horny teenage boys game companies assume make up their audience. However, these were not the only representations. Some titles, like those of the Metal Gear Solid series, treated gay characters seriously, merely making their homosexuality a part of their character background (although it should be noted that these characters were almost always evil). Then we have the “coded” gay characters, those that seem overwhelmingly gay whether by accident or design but might not be noticed by non-gay players: Street Fighter‘s Zangief, Silent Hill‘s Cybil Bennet and King of Fighters‘ Benimaru just to name a very few.

Transgendered characters are an even rarer find: There are a couple genuine ones there if you look hard enough, like Final Fight‘s Poison, but they’re few and far between. A more popular character seems to be the cross dresser: Alfred Asher in Resident Evil: Code Veronica, Flea from Chrono Trigger and Bridget from Guilty Gear. Again, with the exception of Bridget, trans and cross-dressing characters were always represented as some kind of enemy to be vanquished.

The last few years have seen a new era in the treatment of gay, lesbian and transgendered subjects in gaming. With a few minor exceptions, LGBT characters are finally being treated with some respect. Bully‘s boy kissing Jimmy Hopkins and Fable II‘s Hero who’s capable of marrying a same-sex partner have gone a long way to helping open gamers’ eyes to the fact that there are other choices to made out there. Whether or not you like its tactics, Rockstar has done a great job incorporating gay characters into their games, effectively showing that LGBT subjects are nothing to be scared of. The Ballad of Gay Tony marks a turning point in showing a fully realized, non-stereotypical gay character, a trend that I hope will seep its way into other games.

I am often asked if I would like to see a game with a gay central character. The answer is a resounding “yes!” But, do I think it would sell? Probably not – at least not until the games industry matures a bit in its treatment of sex in general. The industry seems a bit stuck in its “horny teenage boy” phase, and until it gets out of this puberty I doubt we’ll see a superstar game hero who just happens to be gay. Videogames are fantasy worlds, but in many ways they are also an Alice in Wonderland-like mirror of our real-life society. Our world is filled with people from all walks of life, so why shouldn’t our games? If we can create a world teeming with twisted monsters, robots, aliens, heroes, villains, men, women, animals and every other kind of creature, doesn’t it stand to reason that there might be some LGBT folks in the mix as well?

Think about all the people over the last decade who have come out of the closet – sports stars, celebrities, actors, singers and politicians. Has coming out of the closet radically changed the way people feel about them? In most cases, no. The deeds they do speak louder than any feelings society may have about their sexuality. When you think about it in those terms, suddenly the thought of a gay videogame hero on the level of a Nathan Drake or Marcus Fenix doesn’t sound so farfetched after all.