Forget Activision’s insistence that Guitar Hero Live‘s newfangled first-person mode will lead to “stage fright.” Stage boredom is more like it. But the series’ first game in five years isn’t all bad news. there’s a lot to like if you can just look past the unconvincing first-person gimmick.

In reinventing Guitar Hero, developers FreeStyleGames (the studio behind DJ Hero) turned the camera turned around 180 degrees from a third to a first-person perspective that broadcasts the stage and the rest of the concert venue from the player’s point of view. The familiar brightly-hued cartoon avatars have been shelved and replaced by real-life actors who react to the quality of your strumming performance. Strike the right chords and the tattooed-covered audience will respond by pumping their firsts and singing along while your bandmates flash approving nods. Hit a sour note and the singer glares and fans won’t even catch your helpless body as you jump from the stage to crowd surf. Ouch.

“The real core idea is that we want to make you feel more like a rock star,” Jamie Jackson, Guitar Hero Live‘s creative director, told The Escapist. “Games do this thing beautifully where it feels like it takes you to a different place. Guitar Hero has always made it feel like you’re a rock star. So, we asked ourselves, how do we further that? That’s what drove this first-person thing. We wanted to put you on stage bring you into the experience and take you on this journey….it’s a totally different experience.”

It’s a worthy experiment that didn’t quite work in my hour or so of hands-on time with the game immediately following Activision’s announcement. The biggest problem was one of repetition. I played about 10 songs (the demo included three different tracks), and I was treated to slight variations of the same video over and over. There’s a 20-second introduction that feels much longer, a slow stroll through the backstage of a major concert past the creepy long-haired roadie to join your eager bandmates under the lights. It felt like I was trapped in a music game version of Groundhog Day movie. While hammering out the notes on the guitar controller, I felt neither exhilarated nor offended by the filmed scenes of glaring band members or adoring fans. My focus was on accurately hitting notes, so the video served mostly as background noise. 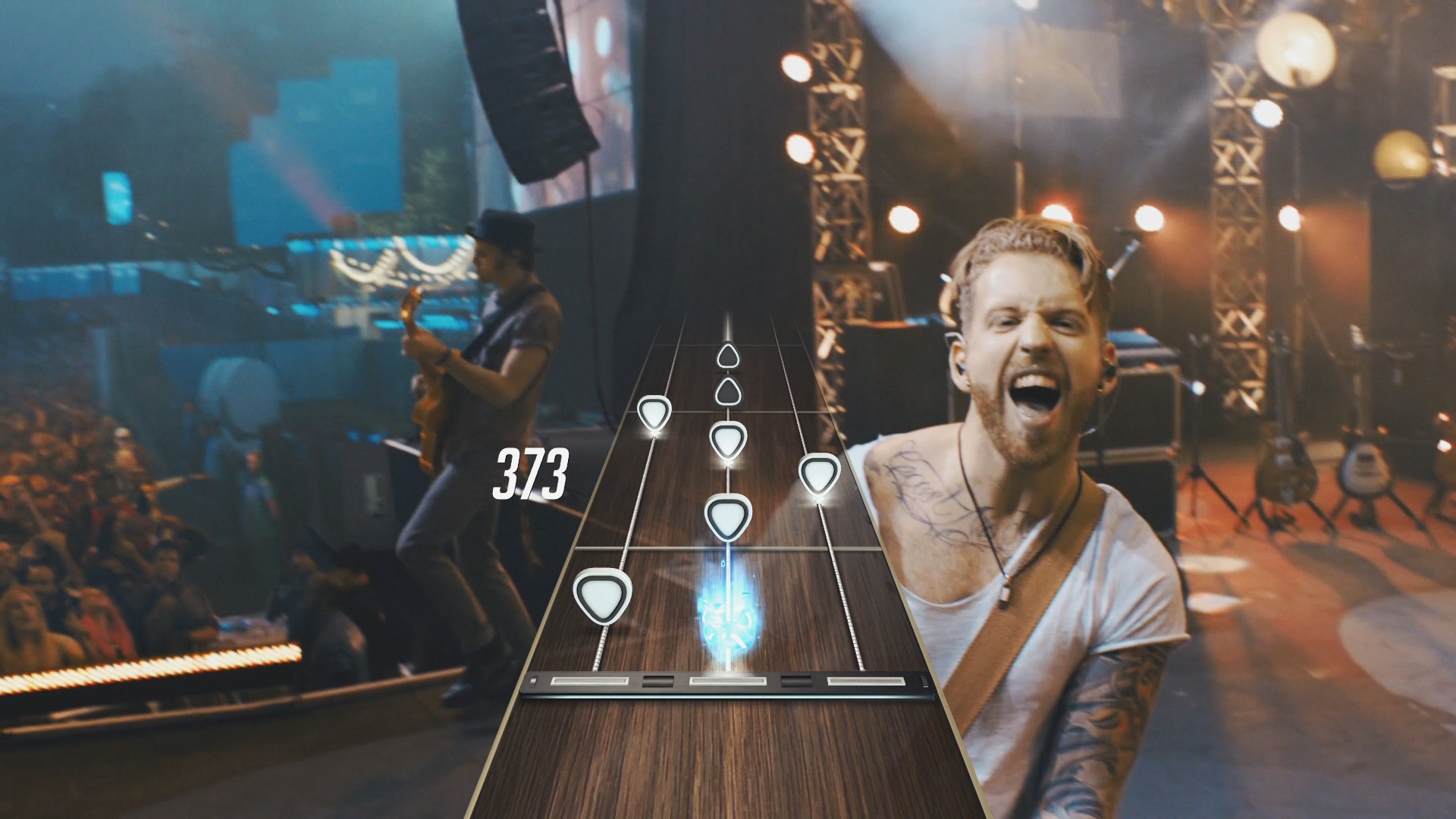 It’s an early build, so perhaps FreeStyleGames will flesh out first-person mode. But so far, it’s a bummer. The ace up Guitar Hero Live’s sleeve is instead the guitar controller which has been retooled for realism’s sake. Gone is the five candy-colored button layout of old – jettisoned in favor of two rows of three buttons that players can manipulate using only an index, middle and ring finger.

“We looked at how people played, and a lot of people only played with their first three fingers and stayed on medium difficulty,” Jackson said. “Once you had to use your pinky, or move your hand, it lost a lot of people. We came to call this ‘Stage Pinky.’ So we made a new guitar that better reflects how people play the guitar naturally.”

That felt like a true statement in my time using Guitar Hero’s new plastic axe. As a long-time player of both this series and Rock Band, I struggled at first to adjust to moving my hand horizontally along the neck of the guitar rather than vertically while letting my pinky rest. It was also strange to see only black and white-colored notes on the screen when I’m so used to five different colors. But after four attempts at aping songs from Fall Out Boy and The Killers, my muscle memory kicked in and I felt way more comfortable switching rows and playing the equivalent of chords. By my eighth or ninth attempt, I was clearing 75 percent of my notes on “advanced,” the third tier of difficult level.

One of the benefits of the reimagined guitar, added Jackson, is that it’s more forgiving on beginners, but the six buttons add more difficulty for pros.

“We wanted something new, and wanted to build on what we had before,” Jackson said. “We discovered that the six-button layout adds depth and gives our vets something new to learn, while easing things for the newbies.”

Few details were unveiled about the GHTV service, but it also sounds promising. Activision calls it the “world’s first playable music video network,” allowing players connected to the internet to stream official videos from hundreds of artists and play along both in solo mode or with friends. (“GHTV is our big arcade mode,” said Jackson). Best of all, Activision promises that no subscription fee is required. Unlimited use of service comes with the purchase of the $99 package, which includes the software and a guitar.

The developers also made a wise move in expanding the series’ musical palate outside of the confines of modern and classic rock. Expect to jam along to folk, hip hop, pop, EDM, and country as well as the big brand of guitar rock we’re used to.

When I asked Jackson if Guitar Hero Live will convince players to reinvest in more fake plastic instruments after they collected dust or found their way to Goodwill over the past half decade, he compared it to an upgrade to the Xbox One or PlayStation 4 for players of last generation consoles.

“It’s a new game. It’s the same reason you’d reinvest in a new console. It’s so much fun, it’s a shit ton of fun to play. You’re going to find that inner rock star again,” he said.

That might be true, just don’t expect to find that “inner rock star” through first-person mode.