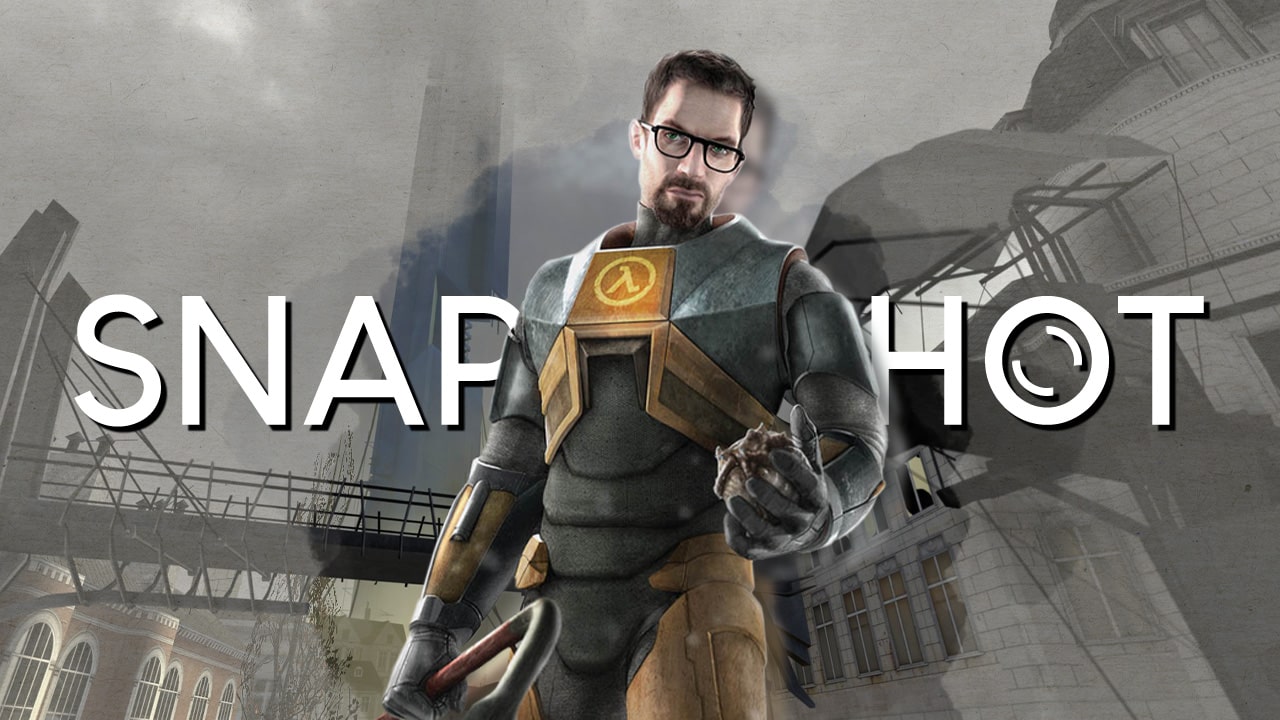 Tutorials are a tricky thing in video games. So often their existence is necessary in order to teach the player the rules, mechanics, and systems of a game’s world, and their absence would cause a mess of frustration for a whole heap of players. However, spending the opening hours of something like The Legend of Zelda: Twilight Princess doing mundane chores in order to learn how the designers want you to play the game doesn’t immediately immerse you into the world. It’s rare that a game is able to provide you with a clear and succinct teaching moment that also builds upon everything else surrounding it — which is exactly what 2004’s Half-Life 2 does with an atmospheric opening walk that culminates in a simple four-word command: “Pick up that can.”

The opening of Valve’s historic shooter expertly solidifies the game’s tone. “Rise and shine, Mr. Freeman. Rise and shine,” are the first words you hear from the enigmatic G-Man before you awaken on a train pulling into the depot at City 17. Right off the bat, the train platform tells you so much about the world you’re inhabiting without needing to say a single word. The ground is littered with newspapers, empty cans, and Chinese takeout boxes. The drab gray tones of the train depot convey a sense of oppression, highlighting that there’s no room for freedom or expression in this world.

An Orwellian video message from Wallace Breen, the Combine’s new puppet-ruler of Earth, plays on a loop. His voice is meant to be soothing and reassuring, but the scripted nature of his delivery and the words he focuses on are anything but. “You have chosen, or been chosen, to relocate here,” the voice echoes across the platform. You can guess which of those two categories your fellow citizens scattered about fall under. 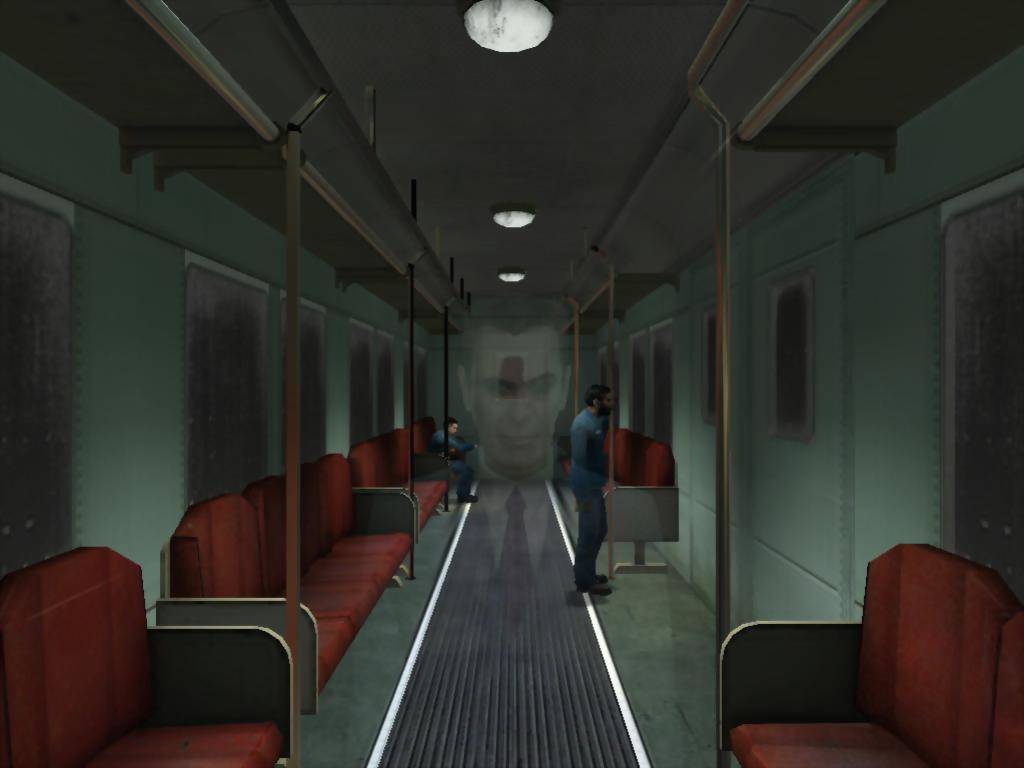 A masked Combine Soldier hassles a man and forces him to part with his luggage. A cafeteria filled with lost souls pacing about in similar drab uniforms. You can overhear small slices of whispered conversation about the hopelessness of the whole situation. A concerned woman looks on through the fence, asking if you were the only ones on the train. She is clearly waiting for a loved one who hasn’t arrived yet, and most likely never will. This is just one of Half-Life 2’s countless small glimpses into a story that could undoubtedly be the center of its very own game.

“Welcome to City 17. It’s safer here.” The leader’s voice concludes his scripted message. A security drone hovers overhead, and a sense of panic quickly hits as its spotlight shines on you for a moment before continuing on its path. Through a fence we can see an armed guard watching on as an alien creature does janitorial work. A hybrid mix of human and alien propaganda posters are slapped on every flat surface as a constant reminder that there’s no escape from the watchful eyes above. If you get close to a guard, you’re shoved away and told to keep your distance. It’s hard to imagine this place ever being considered “safe,” and all of these elements coalesce to form an immensely evocative mood.

As you press on, you make your way through a winding queue of fences, all the while under the oppressive gaze of faceless armed guards. To them, you’re no different than cattle marching through the maze of a slaughterhouse, and the gameplay here accurately conveys that sense of dehumanization. You can choose to slow down and peek in through a small slit in a door where an interrogation is being held. A guard notices and quickly slides the opening shut. This is an early lesson in how taking your time and really soaking in the world of Half-Life 2 can lead to the discovery of assorted tiny yet captivating vignettes. 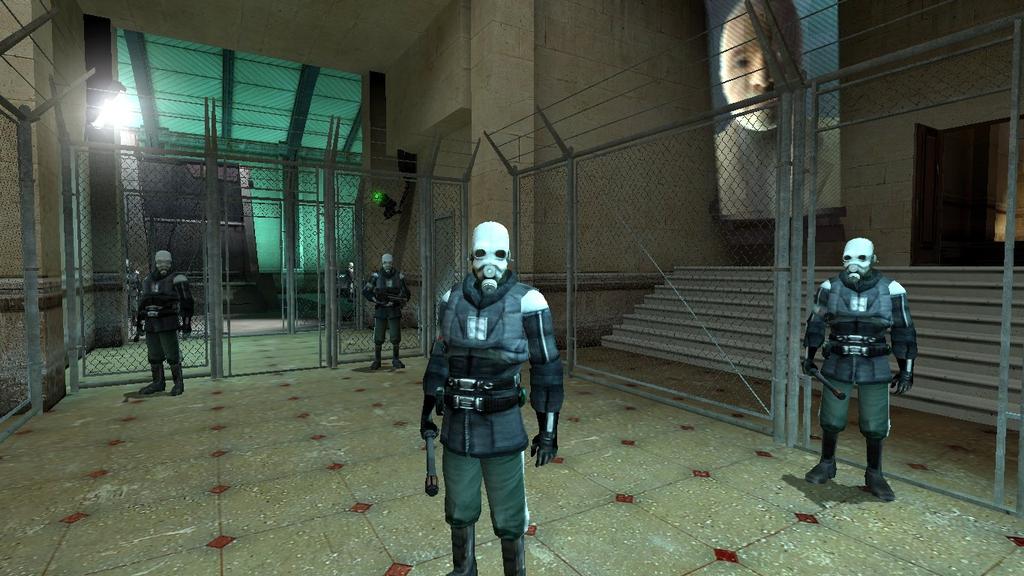 Thankfully, it turns out the specific guard escorting you to your “punishment” is actually your old pal Barney in disguise, who, along with Isaac Kleiner, helps you slip away from the guards and sends you on your mission to find a woman named Alyx Vance. You climb up through a window and drop down into another hallway. Down the hall, a guard saunters up through a partially closed gate. He lifts his baton and smacks an empty soda can off of its resting place on top of a garbage can. He gives an order, his voice coming through with an unnerving static distortion of his communicator:

This is where Half-Life 2 teaches you a whole slew of valuable lessons that are going to be vital throughout your adventure, one of which being that you can pick up and toss countless loose items scattered across the environment. This might seem mundane in 2020, but thinking back to video games in 2004 this was an absolutely remarkable feat, especially when it evolved later on in the game once you got your hands on the iconic Gravity Gun. The designers at Valve found a way to teach you about the new mechanics of this game not by slapping a text box with instructions in the middle of the screen, but rather through the bark of a Combine Soldier ordering you to pick up a can.

Back to the empty soda can, which is still laying on the ground. At this point, you have several different options in how you can react to this situation. The simple response is to do as you’re told — pick up the can, move it over to the trash bin, and drop it in. With a satisfied snicker, the guard will let you pass. However, if you do nothing and simply begin to walk away, the guard will chase you down and give you a heavy smack with his baton for refusing to obey his commands. And then there’s the aggressive route, which rewards you with an Achievement for picking up the can and tossing it right back in the guard’s face.

This moment teaches you about Half-Life 2’s mechanics, informs you that situations can be solved using different means, delivers a wonderful bit of world-building, sets an incredible tone, and provides an opportunity to flesh out the kind of character you want your Gordon to be. Do you comply with the order, knowing that surviving this encounter means living to fight another day? Do you resist, never bending your knee to this alien regime? What happens if you simply turn the other cheek and walk away? It’s remarkable that a game from over 15 years ago not only allowed you to ponder these options, but also had systems in place to react to whichever decision you made. And it’s not that a prompt shows up with three options, and whichever one you choose results in a scripted response. It’s all based on what you decide to do with the playground that Valve has created, which is a design motto that the developer still clearly adheres to with the massive accomplishment in VR that is Half-Life: Alyx.

The simple decision of what to do when you’re told to pick up a can was a profound moment in 2004, and it has since laid the foundation for what remains one of the seminal FPS experiences in all of games. Over the past month or so I’ve covered a couple games from the incredible flock of late-2004 releases, specifically Halo 2’s unexpected character twist and Metal Gear Solid 3’s sandbox encounter with The Boss. Half-Life 2’s phenomenal opening and low-key tutorial stand with those moments as crowning achievements in design that are still being looked to as an inspiration over 15 years later.