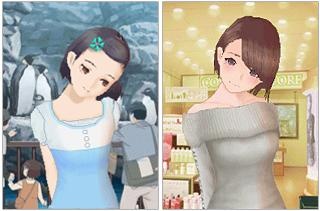 It’s tough to keep a boyfriend in Japan where there are so many choices for virtual companionship.

Japanese men love their virtual girlfriends. Sometimes they even marry them. It’s no wonder that a recent survey of 300 Japanese females revealed that more than half don’t think they can compete with the ladies inside a Nintendo DS.

The online survey, translated by Sankaku Complex (NSFW), asked 300 women if they thought they had a chance against the virtual ladies of videogames such as Love Plus. 53% thought they had “no chance.” Despite the fear of pixelated girlfriends, only 28% said it was fine to partake in virtual relationships if they were kept hidden, and 20% didn’t mind at all. However, 7% said they would dump their boyfriends if they became obsessed with a series of instructions and art assembled to represent a female.

One responding female said: “There’s no way I can beat that level of cuteness.” Another believes “they’re made to be the ideal girlfriend,” and some would even call the virtual girlfriend “complete perfection.”

Talk about self esteem issues. I can’t say I understand the dating simulator genre as it’s more of a phenomenon in Japan than in the United States, but they must be pretty big over there for females to think their boyfriends would choose a woman that can only be accessed through a touch screen or controller over a human being. I get that some men out there might choose a virtual female over a real female, but for a woman to think she is inferior to a Nintendo DS game is pretty extreme.