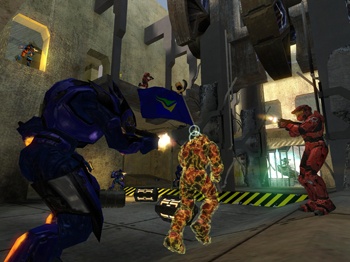 The mystery of why you can’t have more than 100 friends on Xbox Live seems to have been finally solved, and it turns out that it’s all Halo 2‘s fault.

I don’t know why you’d ever want to have 100 friends on Xbox Live. Can you really play games with that many people, or even want to keep track of what games that many people are playing? Okay, forget what I think. Clearly, there are people there who want to have friend counts on Xbox Live that stretch into Facebook-realms of triple digits. And yet, Microsoft has always said no. But they’ve never said why.

Well, they still haven’t but G4‘s “high-level source” at Microsoft has. Turns out that the reason you can’t have 100 friends is because of some lingering architecture from the old Xbox Live, which didn’t allow you to have more. So why not just ditch those crummy old parts? Well, apparently they’re vital to the Xbox Live support of Halo 2. Without them, Halo 2 would be unplayable.

That would put the many folks who still play the game out in the cold, something Microsoft apparently isn’t willing to do. So either the company ditches the fans who are still dedicated to the game (I wasn’t aware people were still that into Halo 2), or they give into your silly demands for a bigger friends list cap. What’s more important: letting people play the game they love or adding that many more dudes to your Xbox Live account? I think you all know the answer.

How Much Money Does Bobby Kotick Make?