This past Wednesday, a major anniversary for one of geek culture’s most cherished (and important) modern institutions passed basically without any kind of official notice (seriously, Warner Bros? Does anybody have their hand on the wheel at this point?) or real fanfare: Batman: The Animated Series turned 20 years old, having debuted on September 5th of 1992.

Nobody knew it (or, we can only assume, even expected it) at the time, but on that day something was set in motion that would change the animation industry, the comic book industry, the movie industry and the very fabric of fandom in ways no one could’ve imagined.

In some ways, it was a matter of everything happening at the right time. Warner Bros. had seen their acquisition of DC Comics finally pay off huge when Tim Burton’s Batman became an unprecedented juggernaut of mass media merchandising with an impending sequel virtually guaranteed to make it even bigger. However, there wasn’t much to keep the brand pumping in between films. American comics had entered their Dark Age, and while teen and adult comic fans (and the speculator’s market) were eating it up, it was not the place for them to drive licensed toy sales.

But what Warner Bros. had also done in the recent past was double down on original TV animation in the mid-to-late 1980s, and by the 90s had a reliable stable of the medium’s best talent to draw from. A weekly superhero cartoon starring what was now the genre’s biggest character? The suits couldn’t say yes fast enough.

That burning desire by Warners to get a Batman show – any Batman show – on the air as soon as possible translated to a never-before-seen level of freedom for the assembled creative team. While nominally similar in tone (at least at first) to the recent movies, they were allowed to create a Batman that was entirely their own, grounded in an ambitious and comprehensive noir aesthetic that began with the then-novel technique of painting the backdrops on black paper instead of white and branched out to embracing a timeless design sense (futuristic technology, modern speech, black and white TVs, 40s-style clothing and a police department inexplicably committed to zeppelins as an urban crimefighting tool). They also had license to pull often overlooked characters from the DC Universe’s dense backlog, bringing the likes of The Riddler, Mr. Freeze, The Mad Hatter and Ras Al Ghul to the attention of a new generation.

They also got unheard-of leniency in the fields of violence and thematic darkness, which wooed skeptical older comics fans and earned them early raves from preview screenings on the convention circuit. When the show finally hit, it hit big, transfixing spellbound younger viewers in its target audience and quickly earning the attention of their parents and older siblings at the same moment that The Simpsons was making grownup viewing of cartoons acceptable to the mainstream for the first time in decades. Two decades later, it’s not uncommon at all to hear Bat-fans 30 and under cite The Animated Series as their preferred or default vision of the franchise, and comics culture in general is now littered with folks whose fandom began with this show.

One of its most visible effects on its own source is the character of Joker’s girlfriend Harley Quinn. Created originally as a compromise to keep The Joker suitably menacing (supposedly, Joker stories would require a certain amount of “clown gimmickry” in the action scenes but they wanted a secondary character to handle the sillier stuff so Joker always “meant business”), she quickly became one of the breakout stars of the series and migrated into the mainstream DC Comics Universe. Another original creation of the show, Gotham policewoman Renee Montoya, went on to become one of the DC Universe’s more important recent fixtures. 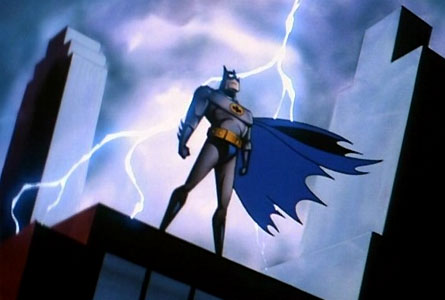 But the series’ reach and impact extended far, far beyond even just Batman. Its success compelled Warner Bros. to commission a Superman series and, in what turned out to be a brilliant maneuver, a second run of Batman (done in a semi-revamped style to better match with Superman’s) that would cross over with it. To a degree not seen in U.S. animation since the Filmmation shows of the 70s, which frequently shared characters and plot points, the concept of shared universe continuity quietly made the leap from comics to TV, and may have laid the generational groundwork for that same concept to be brought to movies by The Avengers years later.

The success of the Superman/Batman shows, meanwhile, spurred further development in the construction of what was becoming known as “The DC Animated Universe” in the form of Batman Beyond and two Justice League series, both of which maintained a functioning, cohesive continuity with plot threads stretching all the way back to the original Animated Series. (The DCAU also included, though without as much consistent reference, Static Shock and The Zeta Project.) When the curtain finally came down on Justice League: Unlimited in 2006, this Animated Universe had amassed an astonishing 14 years of individual episodes that can indeed be viewed, in order, as a single massive story spanning thousands of years, dozens of worlds, multiple universes and hundreds of characters.

But while the story that began in Batman: The Animated Series may have ended, its legacy is all around us. The DC Animated Universe didn’t just double back around and influence DC Comics, it also crept into other tangential adaptations. Batman & Robin borrowed the animated origin story (at the time not officially integrated into the comics) for its version of Mr. Freeze, and it’s hard to imagine Christopher Nolan being permitted to build Batman Begins around The Scarecrow and Ras Al Ghul without TAS making them known to a wider audience first. And, of course, there’s the best selling (and critically acclaimed) Arkham Asylum videogames, the aesthetic of which is best described as fusion of the more recent live action movies and The Animated Series, and brings back key figures of the series’ now legendary voice cast to complete the ensemble.

Even beyond that, when you step back and really look at it, we’re living in the pop culture universe that Batman: The Animated Series created. Superheroes are the reigning American mythic symbol, dominating the box office and overwhelming the airwaves. Every action cartoon made since has labored in its long, imposing shadow.

So cheers, Batman: The Animated Series! May we still be talking about you this way when you turn forty.