Last month I survived the Tet Offensive, unraveled a high-level religious conspiracy, dethroned a malevolent king, became a benevolent king, commandeered a futuristic aircraft without an instruction manual and – most implausibly – swept the court with Michael Jordan like he was some junior college B-team chump. And it was all too easy. 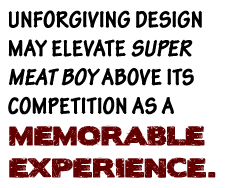 I grew so accustomed to guide arrows and objective overlays telling me where to go and what to do that it’s a wonder I dressed myself each morning without a tutorial and a pat on the back.

Success came painlessly and reward regularly, to the point that I must have mentally glazed over during the last week of my month-long marathon, my hands making the perfunctory click or flick of the control pad, my aplomb fading into apathy.

Because now, after my annual Thanksgiving buffer, I can’t say I remember how I did any of it. I remember scraps of stories. Sad, how someone who’s saved the world can’t recall how he did it.

I can’t say when I became so passive with videogames,or forgetful. As a kid, I bit down on my lip and fought to finish a game. Now games fight to hold my attention. Along the way, something must have changed. Was it the games or, as my parents warned me, part of growing up?

“In major titles the emphasis has certainly been shifted away from making the player feel any sense of frustration,” says Charles Pratt, a freelance game designer and researcher at New York University’s Game Center. “Open world games such as Red Dead Redemption and Assassin’s Creed: Brotherhood have traded the tightly structured levels where the player has to fight from the beginning to the end for missions that mostly involve traveling from one spot on the map to another, with maybe some light combat thrown in.”

Pratt cites Super Meat Boy, the 2D platformer by Edmund McMillen, as a recent game that swims against the current. Super Meat Boy‘s steep difficulty, one hit deaths and sadistic level design take a hatchet to its players’ humility and flout the trend of frustration-free gaming.

Old school in look and design, playing SMB requires lots of trial and even more error. Done correctly, a stage can be completed in seconds,but learning the method to do so may take hours. One misstep in Super Meat Boy spells death, then it’s back to the beginning of the stage. The game can be (and usually is) frustrating, but that’s not a mark against it. In fact, unforgiving design may elevate Super Meat Boy above its competition as a memorable experience.

“When a game doesn’t push back on a player they’re more likely to remember what happened in the story, or one of the interesting set pieces. They’re less likely to remember something that they, rather than the developers, actually did in the game,” says Pratt. 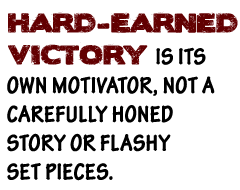 He expands, “For instance, I can remember the basic plot of Uncharted 2, and a few of the events, such as the train sequence, clearly. I can’t really recall any of my own actions in the game, however. I couldn’t tell you what I did of any note in any of the firefights, or how I solved any of the puzzles. Contrast this to an older game, like Mega Man, where I can distinctly tell you how I beat some of the bosses.”

Super Meat Boy falls squarely in the Mega Man camp. Hard-earned victory is its own motivator, not a carefully honed story or flashy set pieces.

Super Meat Boy goes the extra mile to help you remember how you played by creating a visualization of your hard work and dedication. Upon completing a stage, a replay video shows at once all your futile efforts to reach the goal along with the single success. It’s a flurry of bloody missteps, but beyond that it’s like watching your brain learn the game: Tools exploited, challenge solved.

In the replays of the more difficult stages, my skills’ growth is clear. The tough spots I struggled through corresponded with the spots where the most Meat Boys popped into a cloud of gory red fizz: a hundred Meat Boys start, about 80 make it over a tough jump, 30 know the trick to get across the spike pit, and only one squeaks between the final row of saw blades.

In Super Meat Boy, I was not rewarded into completing a level, but rewarded for completing it. The sense of accomplishment was not pre-rendered by the developer to prolong my enjoyment of the game, like a flashy cut scene that explains the world’s gratitude for my actions; instead, the accomplishment was drawn from my experience. My enjoyment came from inside, not out.

But is this reward system better? Many gamers appreciate the escapism that games provide. Judging from recent sales numbers, frustration-free games can do staggeringly well; in October’s NPDs, 9 out of 10 games fit the bill.

That games have trimmed away their more frustrating factors over the last thirty years was arguably a necessary step in their evolution. How and where we play games has changed dramatically since the 80s. In that decade, most casual gamers experienced the medium at an arcade. To milk players for change, arcade games were purposefully difficult. A successful arcade game had to be easy enough to interest the player, but difficult enough to warrant a constant stream of machine-fed quarters.

Now, most anyone can game most anywhere. In 2007, a report from Nielsen Co. found more than 40 percent of television-owning households in the United States also owned a videogame console. In 2009, GfK ChartTrack reported 8 out of 10 British households owned a next-gen console.

On top of that, former non-gamers have been seduced by highly addictive Facebook and iPhone games like FarmVille and Peggle. The industry has successfully cast its net far beyond its core.

None of these platforms – console, browser, mobile – require the compulsive difficulty that funded arcade machines. Most of these games require payment up front. The player pays for a complete experience, and with console games averaging $60 a pop, it’s reasonable they want that experience to be pleasurable.

Games that allow players to funnel in money, like FarmVille, don’t string the player along by making the gaming increasingly difficult. They do the opposite: Paying for extra parts of the game makes it easier.

Even Super Meat Boy knows the power of, well, power. Accomplishing specific tasks in the game unlocks bonus playable characters, some with abilities that cut the game’s difficulty.

Games have been perfected for pleasure. Are videogames then the pleasure pills, the bellwethers of our self-destruction that Aldous Huxley warned against in Brave New World? A reach, perhaps, but they do have that potential, especially in the hands of developers who design games to exploit human weakness for personal gain.

As Blue Byte studio’s Teut Weidemann so casually put it in a speech at GDC Europe 2010, “We have to bring them in and keep them addicted and make them keep playing.” His co-worker, Blue Byte executive producer Christopher Schmitz later added, “Game design is not about game design anymore – now it’s about business.”

It would be unfair to say Weidemann and Schmitz speak for the industry, or even their whole studio. Their comments represent simply one direction in which the medium is being pulled. As things stand, the result of frustration-free games’ rise is less sinister than it is intellectually middling. 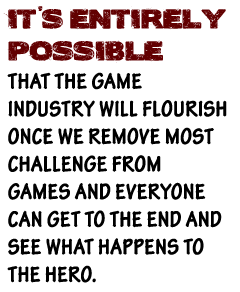 “The danger of removing challenge from games is that, in the long run, I believe it will narrow the scope of game design. There’s no reason to carefully lay out a series of jumps if the player is never allowed to fall,” says Pratt.

“It’s entirely possible that the game industry will flourish once we remove most challenge from games and everyone can get to the end and see what happens to the hero,” he continues. “If games are moving towards interactive movies or virtual tourism, however, no matter how successful that direction might be, we should know that it’s a trade-off. There are certain kinds of memorable, and sometimes beautiful, experiences we’ll be giving up.”

Super Meat Boy may not teach us heady life lessons, but it does edify a core value: Victory is hard-fought. It’s a game for ludomasochists: people who take pleasure and find value in the difficulty of play.

In a way, aren’t all humans ludomasochists? We like to accomplish goals. We enjoy the sense of progress. More than that, we like being rewarded for our efforts: A raise, a home, retirement. This is why most of us wake up in the morning, to do and to grow. The majority of videogames serve to create a fantasy in which we can achieve the otherwise unachievable with comparably minimal effort.

But at a certain point, what motivation is there to participate in the real world, where rewards are hard won? It’s not wrong that we enjoy our escapism, but as games get better and better at exploiting our sense of progress and success, it will become increasingly important to remember the value of working for what you want.

Because in life, there are no arrows.

Chris Plante is a freelance pop culture writer living in New York City. Learn more about his life, career and haunted apartment at his website, ctplante.com.

The Game That Ate the Earth