Any time the name “Shenmue” is mentioned, fans pricks up their ears, like loyal dogs awaiting their master’s call. Though they’ve heard news of Shenmue City, a social game along the lines of Mafia Wars, and tales of the development tribulations and ultimate cancellation of Shenmue Online, what they’re really waiting to hear is something about Shenmue 3, the last piece of a story started more than a decade ago that languished along the way. Part of this is the simple desire for a new chapter in the story, and to find out what happens next. But ultimately, this is less about the new game and more about the old, because the absence of Shenmue 3 continues to affect its predecessors, changing them in a real and fundamental way. 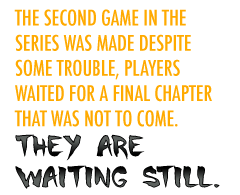 At the time of its release on the Dreamcast in 1999, Shenmue was unlike anything else. Billed as a “FREE” game, for “Full Reactive Eyes Entertainment,” it was touted as offering a level of player freedom unparalleled in the history of gaming. The game took place within the city of Yokosuka, giving you full reign to wander about, interviewing people and gathering clues regarding the mysterious man who killed your father. Pains were taken to give Yokosuka a vibrancy and depth – days would pass, and the weather would change based on actual meteorological data from the time period. Time would pass, and people would go on with their lives.

We are now familiar with gaming on this scope, and the conceits that seemed revolutionary in Shenmue are now known quantities. We’ve come to understand the macroscopic drama of Grand Theft Auto games in the way they offer labyrinthine urban spaces as both sandbox and stage. But Shenmue‘s aspirations stood even further than this tradition of big city stories – the game was to be the first in a trilogy, charting Ryo Hazuki’s epic quest across years and continents, arriving at a breathtaking conclusion.
But while the second game in the series was made despite some trouble, charting Ryo’s journey out from Yokosuka to the big streets of Hong Kong, players waited – and waited – for a final chapter that was not to come. They are waiting still.

Somewhere in this drizzle of vaporware there is a lesson about the inherent limitations of episodic content, and the mercurial process of game development. But at work, too, is the shifting way that sequels and adaptations affect our media, and our stories. It’s a common case that our total experience with a story irrevocably shapes every aspect – think of the hordes of people for whom the entire Star Wars franchise was ruined by its prequels, sullied by the knowledge that somewhere, in the deepest pockets of space, Jar Jar Binks was flapping about with his ass stuck in a honey pot. But surely this canonical thinking works both ways and is shaped by absences as well as presences: Imagine, say, a “Star Wars Duology,” in which Return of the Jedi was never filmed. Its story would end with failure and betrayal, a carbonite shower, amputation, defenestration, and Luke’s blotchy face and tiny tears. The end, forever. The rise-fall-rise of conventional storytelling enters freefall. Pluck out a chapter, and everything changes.

And so Shenmue‘s makeshift duology has its own abrupt ending. After following a trail of clues across Japan to Hong Kong to the Chinese city of Guilin, Ryu descends deep into an abandoned stone quarry, where he finds an ancient artifact. A mysterious prophecy is uttered, and an enormous carved disc on the cave wall begins to rotate, to reveal … well, who knows? Hours and hours of gameplay, and the final leg of your journey arrives at a literal stone wall. The end, forever.

But if this type of sequential limbo is found throughout other media, what of this is unique to gaming? To begin with, there’s the matter of scope and duration – approaching not one, but two sprawling multi-hour games with the knowledge that there’s no closure in sight is a daunting sell, with no narrative carrot at the end of the stick. And also, more jarringly, is the way that this untimely terminus informs gameplay. Though the Shenmue project had decidedly mundane reasons for failure – an all too familiar tale of budget trouble, creative differences, and poor sales – to anyone aware of Shenmue‘s developmental woes, it is now difficult, if not impossible, to play the existing Shenmue titles without feeling that creeping sense of inertia all around you, as if the games themselves were dragging their feet.

As some of the first 3D sandbox cities, the wealth of options open to you are staggering – at times, even paralyzing. The game’s level of detail, once touted as a groundbreaking next step in gaming, now seems to languor at every turn. If the Grand Theft Auto games have been vilified as crime simulators in which you can press a button to buy a hooker then run a hooker over with a car, Shenmue is a game where you can press a button to politely ask directions, then combo into cherishing your elders and always remembering to recycle. Instead of giving us a city to be tested and battered against in all directions, Shenmue builds you a world and asks you to follow the rules rather than break them.

In the face of such civic orderliness, it’s no wonder the games descend so quickly to mundanity. Shenmue is a game that tasks you with discovering the ultimate secret behind your father’s murder, and then recommends you check out the many vending machines in the city – because with each purchase, you get a neat little plastic toy! It is a game where you race to assemble a set of relics to save the world, but you aren’t so pressed for time that you can’t save some kitties while you’re at it. It is a game that gives you an entire city as a playground, and then requires you to get a job driving forklifts at the wharf – not in some piddly minigame, but actual, grueling, repetitive labor. Shenmue, in its desire for breadth and verisimilitude, comes to combine the compulsiveness of Pokémon with the single-mindedness of Stacker Tuesday. 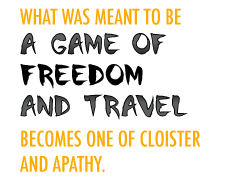 The debate on how games should be designed is one worth having, and certainly we haven’t come to a consensus on the ways in which the infinite variety of a thriving city is best captured in a game. But from Shenmue‘s example, we can see one perspective, with its pros and cons, and find an argument and counterargument. In a recent essay, game designer Daniel Cook argued that the art of game design has more to do with procedural rather than handcrafted experiences, and that designers themselves “are closer to mathematicians exploring a new class of equations than we are authors banging out another variation of the Hero’s Journey.” It’s a point worth making with regard to Shenmue, both as a work as authorial as they come, and one that sets out to tell a very old story in a very new medium. Ultimately, it may come down to what we expect from our games – inevitability versus probability, and the differences between the way we tell stories on the silver screen or on the table top. But there’s no denying that, in lacking its ultimate chapter and resolution, there is something crucial missing from Shenmue‘s very spirit. What was meant to be a game of freedom and travel becomes one of cloister and apathy. And a story meant to be epic becomes, in its way, absurd. Call it “Waiting for Ryo: A Tragicomedy in Two Acts.“

We won’t be waiting forever, of course. Just as in the game’s temporal mechanic, time will pass, and people will go on with their lives. None of this is to dub Shenmue a mistake, or a ruined game: We will always need designers brazen enough to dream of games bigger than anything ever before, to offer us cities and promise us worlds. Ultimately, the story beginning in the endless winding backstreets of Yokosuka would converge upon a road to nowhere. Shenmue was advertised as something more real than a game, and perhaps it is, because in reality, getting plunked down in the middle of a brand new city does not always end in excitement and adventure. Sometimes you take a wrong turn. And sometimes you get lost.

Brendan Main hails from the frosty reaches of Canada, where Yokohama’s got nothing on Quebec City. He knows where he’s goin’, but he don’t know where he’s been.

The Game That Ate the Earth