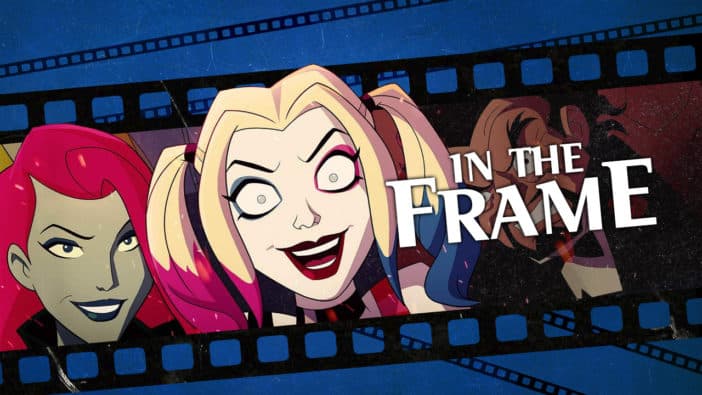 In terms of basic form and structure, Harley Quinn (the 2019 animated series) belongs to a familiar and recognizable genre. With its self-awareness, foul language, graphic violence, and playful exploration of tropes, Harley Quinn belongs to a type of animated programming that has thrived in recent years: the adult cartoon skewering the conventions of more traditionally wholesome fare.

Part of this recent explosion is rooted in simple juxtaposition. In the United States, animation has traditionally been seen as a medium aimed at children or families. As such, there’s a very basic perversion in the subgenre of cartoons that operate within that same narrative framework while adding swear words, grotesque violence, and explicit sexual content.

This genre of programming hinges on the inherent contrast between what is ostensibly kids’ stuff and mature content, with an extra layer of irony added by rendering that inappropriate content especially juvenile. The result is essentially kids’ programming for adults who are still unashamed to be childish for 20-odd minutes at a time. It’s all very reflexive and wry.

To pick an obvious example from within Harley Quinn itself, the primary cast features Wonder Woman villain Dr. Psycho (Tony Hale), who is desperately seeking to rehabilitate his image after using “the c-word” on camera, which leads to public censure from Legion of Doom chairman Lex Luthor (Giancarlo Esposito). Psycho is expelled from the organization for his outburst.

The joke is that Dr. Psycho is a comic book supervillain rather than a real person and that the mass murders committed by villains like the Joker (Alan Tudyk) are more acceptable within the framework of a superhero cartoon than the use of harsh language. The humor derives from the audience watching a cartoon supervillain do something that they know a cartoon supervillain cannot do. 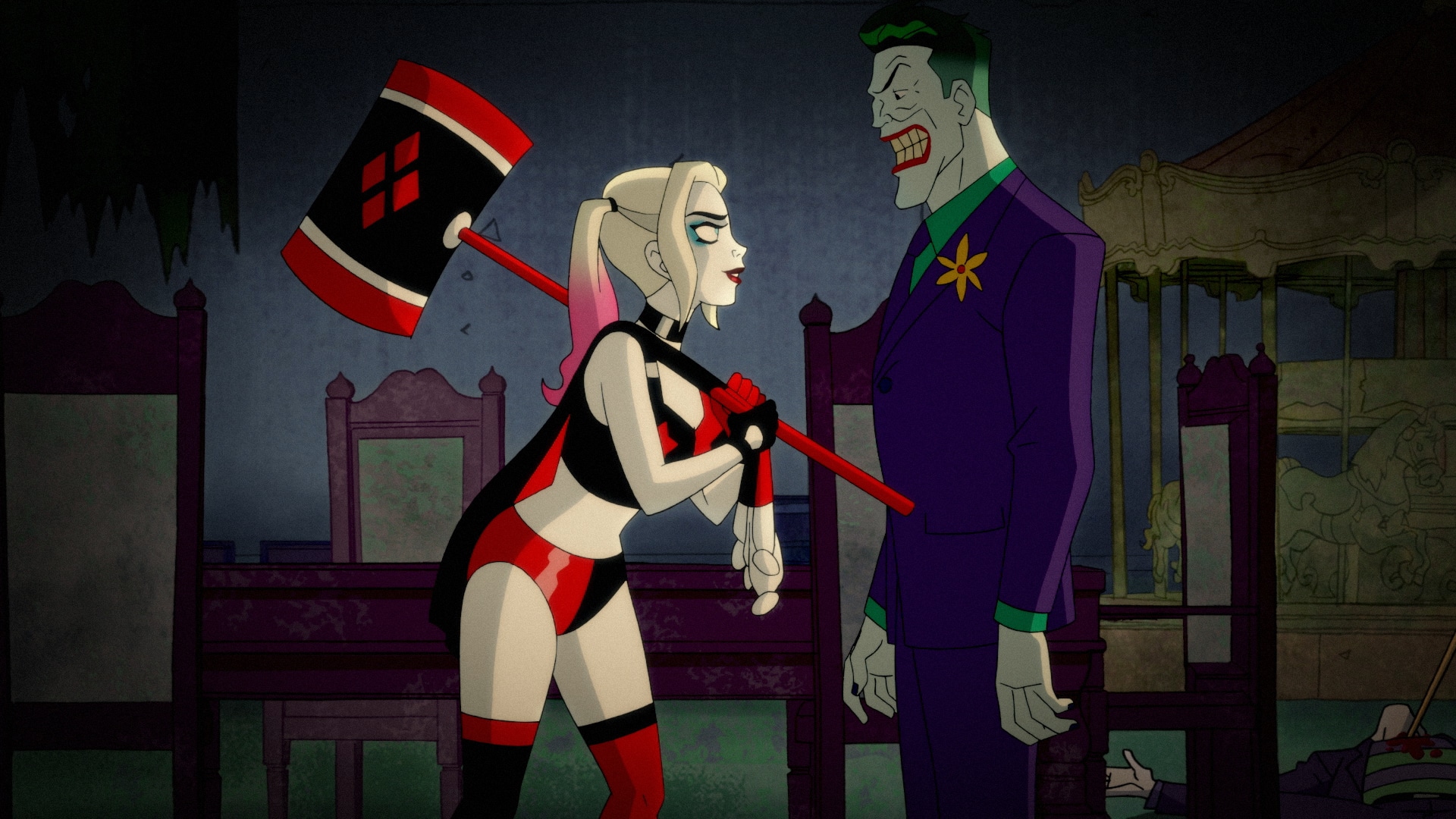 This sort of programming illustrates the way in which mainstream media has grown increasingly self-aware and increasingly engaged with the audience’s understanding of narrative conventions. Many of these series draw explicitly from established frames of reference, often taking inspiration from beloved childhood favorites of the now-adult audience.

Rick and Morty is perhaps the codifier here. The cartoon smash focuses on genius inventor Rick Sanchez (Justin Roiland) and his abusive relationship with his grandson Morty (also Roiland), with the pair embarking on adventures that frequently horrify and traumatize Morty as Rick continues to use his genius to manipulate and harm the people around him.

The basic setup of the series evokes Back to the Future, with Rick’s white hair and lab coat clearly recalling Doc Brown (Christopher Lloyd) and Morty’s name being a single vowel away from that of Marty McFly (Michael J. Fox). More than that, Rick’s technological know-how and casual disregard for his traveling companion’s safety also play a dark parody of the classic Doctor Who template.

Rick and Morty draws from a varied pool of references, often thinly disguised. Two weeks before TNT premiered its long-delayed Snowpiercer television series, Rick and Morty trapped its leads on another dystopian train in “Never Ricking Morty.” The parasitic face-hugging aliens of “Promortyus” are modeled on the creatures from Alien, with the title suggesting Prometheus.

Indeed, Rick himself will often pause the action in order to articulate criticisms of these sorts of narratives. At the heart of Rick and Morty is the assumption that the audience is aware that they are watching a cartoon about characters riffing on genre conventions. It is not meant to be read, as Gayatri Spivak dismissed one approach of processing fiction, as “gossip about imaginary people.” 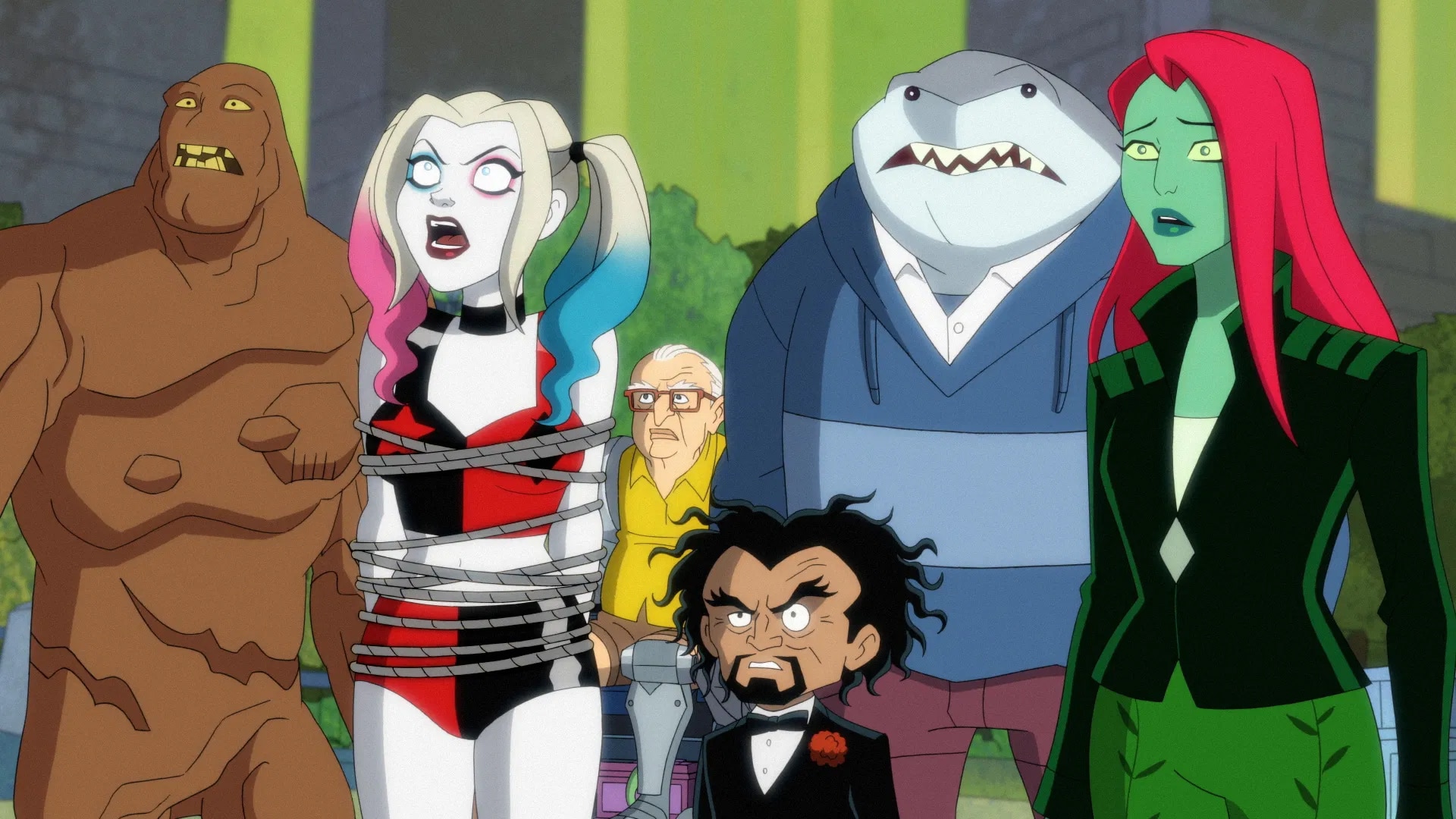 Rick and Morty is the most popular example of this approach, but it is far from unique. The Venture Bros. is heavily inspired by classic 1960s cartoon Jonny Quest, with “Action Johnny” (Brendon Small) even appearing as a recurring character: a washed-up boy adventurer. Similarly, Archer is transparently modeled on the character of James Bond.

This approach is not unique to animation. There have been live-action films and television series anchored in this self-aware approach, like the Deadpool films or The Boys or The Tick. However, these remain isolated from established brands. Deadpool is a Marvel character, but there’s debate about how likely he is to join the Marvel Cinematic Universe. The Boys riffs on familiar superhero archetypes but doesn’t use established names.

These stories build on the audience’s familiarity with the source material. The character of “Action Johnny” in The Venture Bros. invites the audience to consider the ideal of fatherhood suggested in shows like Jonny Quest. The similarities between Rick and Doc Brown or the Doctor explores how much pop culture fetishizes antisocial and borderline abusive behavior under the label of “genius.”

While these shows only barely disguise their inspirations, they exist as distinct from the original properties. Cartoon Network owns the rights to both The Venture Bros. and Jonny Quest, and attentive viewers will notice that “Action Johnny” has a father named Doctor Quest and best friend named Hadji. However, there is still a thin boundary that exists between parody and inspiration.

This is what makes Harley Quinn so interesting. It collapses the gap between sly, subversive animated storytelling and the obvious source of inspiration. Harley Quinn does not unfold in a thinly veiled stand-in for Gotham City, its protagonist facing a hero transparently modeled on Batman. It actually unfolds in this familiar and iconic setting using these familiar and iconic characters. 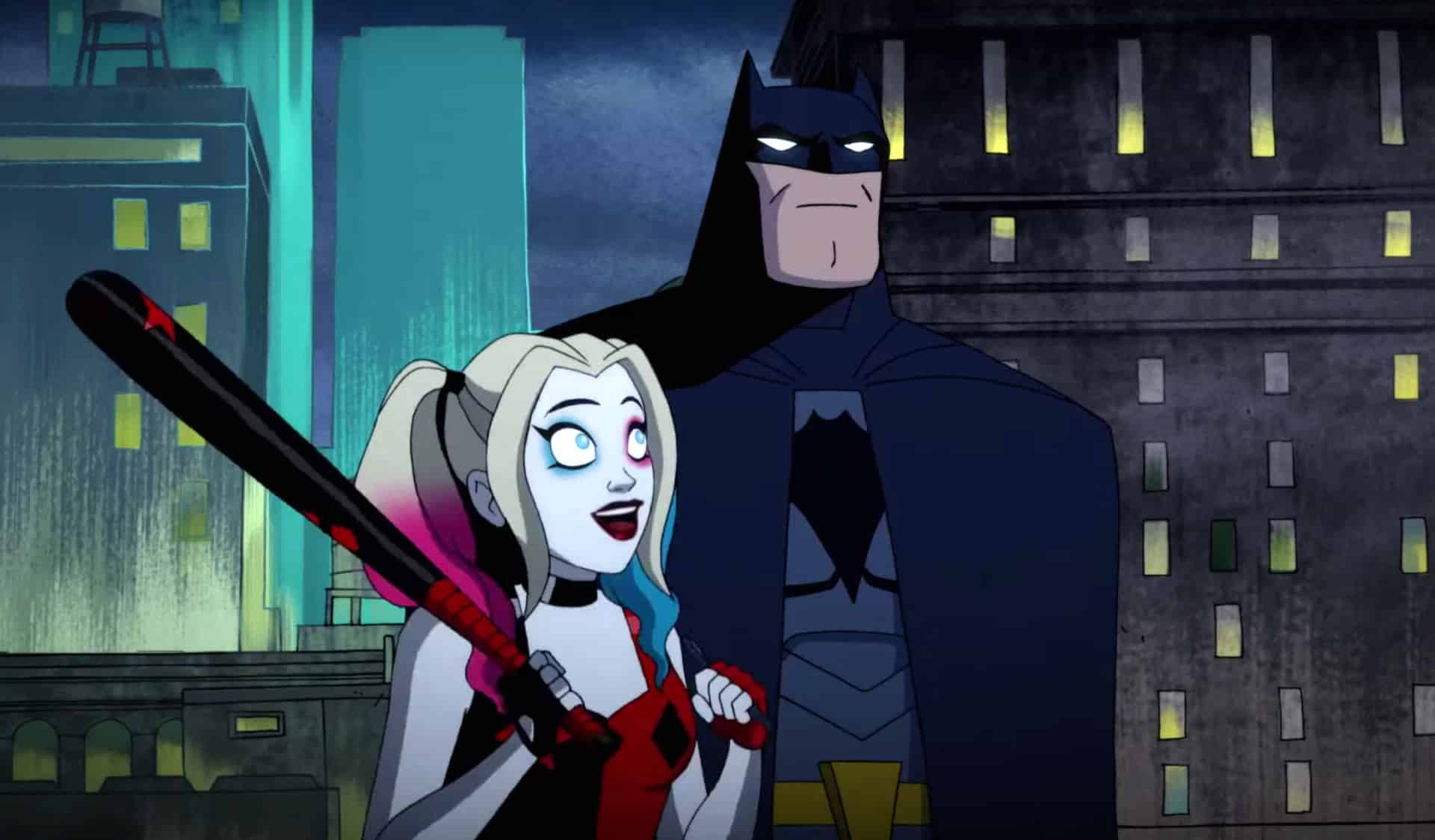 There are some obvious antecedents for this approach, notably the reworking of classic Hanna-Barbera properties like Harvey Birdman, Attorney at Law and Space Ghost Coast to Coast. However, in those cases the joke was the relative obscurity of the original characters, juxtaposed with wry off-kilter guest appearances from more popular cartoon characters like Fred Flintstone or Scooby Doo.

However, the larger inspiration for this approach may come from the comics themselves. Comic books have always been incredibly self-aware, with the Flash even pleading with readers to keep him alive on the cover of a 1966 issue. As a medium, comic books have always allowed iconic heroes to exist side by side with commentaries upon them.

The DC and Marvel comic book universes are populated with characters who skewer the conventions of the DC and Marvel comic book universes. Keith Giffen’s 1985 Ambush Bug miniseries famously featured a “surprise reveal” of iconic DC villain Darkseid at the end of each of its four issues. Deadpool frequently breaks the fourth wall but has also served on both X-Men (and adjacent) and Avengers teams.

Harley Quinn extends this approach beyond the source material. In some ways, it showcases the diversity and the breadth of the DC brand. An icon like Harley Quinn can appear in live-action blockbusters played by Margot Robbie and simultaneously anchor a meta cartoon voiced by Kaley Cuoco. 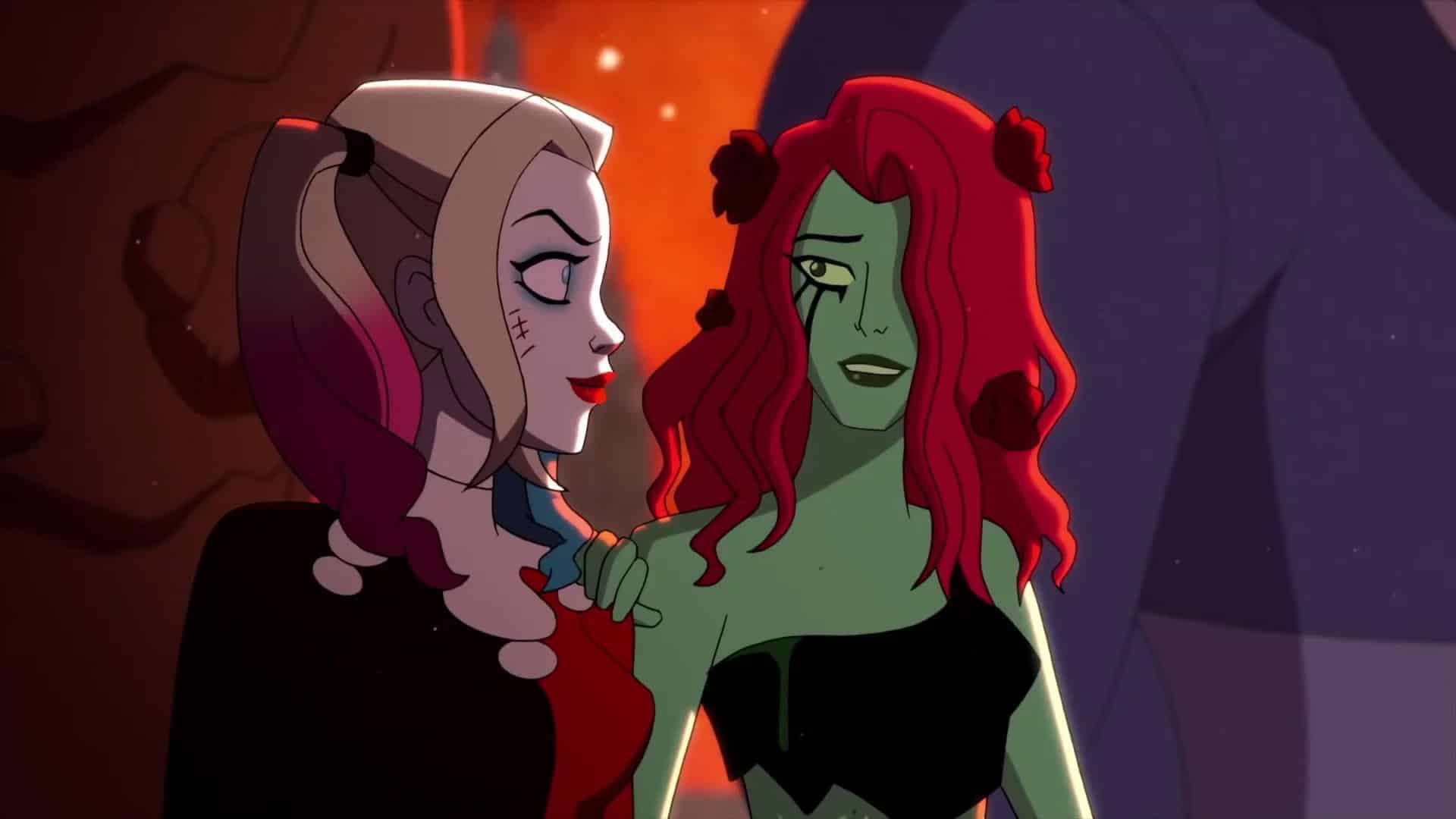 It also demonstrates how reflexive and self-aware modern pop culture has become, where the boundaries between an established intellectual property and subversions of those brands have collapsed into one another. The result is a world where a character wearing a “Release the Snyder Cut” T-shirt can appear within an actual DC universe cartoon starring Batman.

Director Paul Schrader has argued that modern audiences have consumed thousands and thousands of hours of stories, and so we intrinsically understand the logic of stories. Sites like TV Tropes have made an internet generation especially savvy to narrative mechanics. Memetic language is rooted in a shared understanding of the logic that distills a complex narrative into a simple image or animation.

This can be disconcerting to fans wary of this level of irony, who prefer their icons to star in straightforward narratives and to keep them insulated from such self-awareness through that thin veneer of parody or homage. However, Harley Quinn’s embrace of this approach is reassuring in its own way.

It’s heartening to know that these iconic characters can evolve with the times and can examine themselves as sharply as any eagle-eyed viewer.