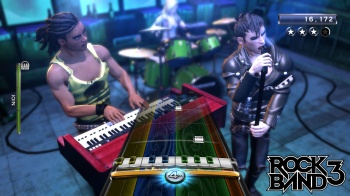 Bad timing might be to blame for lower than expected sales for the latest Guitar Hero, says Rock Band developer Harmonix.

It wasn’t market saturation that led to disappointing sales for Activision’s Guitar Hero: Warriors of Rock, it was competition from other games. That’s the theory at least, although oddly, it’s not coming from Activision, but from the Rock Band 3 project director Daniel Sussman.

Sales for Guitar Hero: Warriors of Rock were much lower than anyone had predicted, failing to hit even 100,000 in the U.S. in the first week following its launch. Sussman thought that consumers may have been saving their money for Rock Band 3, which came out the following month, although he admitted that that was based on what he would do as gamer rather than any hard data.

Sussman also thought that Rock Band 3’s accessibility would make a big difference in whether the game was successful or not. “Our studio is all about accessibility,” he said. “And from game to game we’ve put a lot of emphasis on respecting the casual player. We’ve played very close attention to that in respect to the keyboard and making sure that, whether you’re playing on regular five lane keys or pro keys, it’s accessible to people who don’t have any Rock Band experience.”

We’ll have to wait to see if Sussman’s theory is right, as Rock Band 3 only came out a few days ago, so it’s a little too soon to tell how it compares with Warriors of Rock. Sussman is confident that there is plenty of life left in the music games however, saying that the genre presented all kinds of opportunities for anyone willing to give it a try.