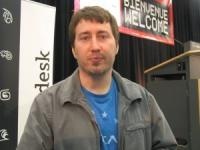 Denise Fulton of Midway confirmed Smith’s split with the company but did not offer any reasons for his departure, telling Gametap only that it came “by mutual agreement between Harvey and the studio.” Smith had served as Creative Director at Midway’s studio in Austin, Texas, after being hired by the company in 2004. Previously he had been employed at Ion Storm Austin, where he worked on Deus Ex and its follow-up Deus Ex: Invisible War, as well as Thief: Deadly Shadows.

Earlier this week, while speaking at the Montreal Game Summit, Smith addressed shortcomings in BlackSite: Area 51, which he referred to as “disastrously off rails,” claiming that difficulties with technology and “reprehensible” time constraints forced the game to go straight from “alpha to final.” Most reviews for the game have given it relatively low scores, which Smith said in his address came as no surprise.