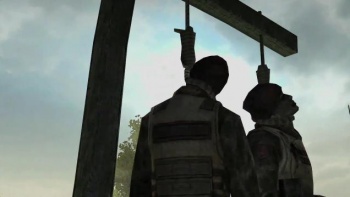 Homefront studio Kaos Studios says working ten hour days is not “unique or abhorrent” and suggests that whoever is complaining about it should bear in mind that a lot of people in other industries are working long hours too.

“Crunch time,” for those unfamiliar with the term, is the span between a project’s due date and the moment at which everyone realizes that there’s no way they’re going to make it unless they start going balls-to-the-wall full throttle. It’s not especially pleasant but like many such things, getting through it is also kind of a badge of honor; you manned up, toughed it out and got the job done. But at least one employee at Kaos Studios doesn’t see it in quite that light and contacted Develop to complain about the stress that the Homefront crunch is causing.

“We have been crunching for the last six months or so at ten hours a day and if we did not hit our bug goal that week we would have to come one weekend day as well for six days a week,” he said. “Over the holiday many of us were on call and unable to leave to see our family or do whatever. And now we are in seven-day-a-week crunch mode.”

He further complained about the lack of resources and over-commitment that led to the necessity of a drawn-out crunch, blaming it on “inconsistent” management, and added that “people at Kaos do not want to hear THQ publicly say things that glorify crunch time.”

But while THQ Vice President Danny Bilson told CVG that the company wants to “reduce the length of crunch” with better production planning from the very beginning of the development cycle, Kaos Studios General Manager David Votypka took a bit of a tougher stance, acknowledging some of the anonymous complaints but saying that all things considered, the crunch situation really isn’t all that bad.

“After only requiring core hours based on an eight hour day for two and a half years, we needed to increase our velocity heading into our final Alpha/Beta phases. If this seems unique or abhorrent, I would have to suggest that any assessment regarding a ten hour work day would need to consider a much larger segment of the American workforce,” Votypka said in a point-by-point response to the complaint. “Digital media companies, marketers, PR, even accountants in various industries throughout the nation, work ten hour days regularly, 52 weeks per year. Out of the three year project life cycle this has been less than 20 percent of the project time, and many staff (who have finished their critical work on the game), are currently back to an eight hour day.”

He also revealed that while some employees have to come in on occasional Saturdays to catch up with bugs, the studio has set daily targets to help avoid that situation whenever possible and to allow for early departures when it’s not. “Feedback from the team was that they wanted to maintain a level of control over their work schedule, so the policy we ended up using was goal based,” he explained. “There have been weeks we avoided Saturday work, there have been weeks we haven’t, and there have been weeks we went home at noon.”

I don’t claim to be an expert in such matters but for an awful lot of people, working ten hours a day with an occasional Saturday thrown into the mix isn’t crunchy at all, it’s a normal work week. The schedule also contrasts with the Doom 3 crunch at id Software back in 2004, when CBS reported that employees had been pulling 80-hour weeks and sometimes sleeping in the office for the better part of a year. I’m inclined to think that Votypka’s advice that the put-out employee take a look around at what other people are doing is right on the money.

Homefront comes out on March 8 for the PC, PlayStation 3 and Xbox 360.