System: Call of Cthulhu 7th Edition
Product: Horror on the Orient Express Campaign, previously a box set published 1991, reprinted 2014
Pre-order price: $119.95; the .pdf version is on sale now at $59.95.
Due Date: December 1, 2014 (PDF was available in October)
Disclaimer: I backed this Kickstarted reprint, to .pdf level only. I’m not made of money!

If you’ve ever delved into Call of Cthulhu‘s murky depths, then you know there are some campaigns best spoken of in whisper. Horror on the Orient Express is probably the system’s most infamous campaign, never reprinted in English, worth a fortune on eBay. Recently Chaosium Kickstarted a reprint edition and raised more than $200,000 on a $20,000 ask, allowing it to do pretty much whatever it wanted and then some. Now new players can ride the world’s most famous train, prevent madmen from obtaining all the pieces of the mysterious Sedefkar Simalcrum, and hopefully destroy one of the most potent occult artifacts ever created. Oh, and try not to die. That last part’s kinda key.

In the original edition — which I fell in love with as soon as I saw it — you got four separate campaign books with 13 scenarios in all, passports, luggage stickers, train car plans, a complete cardstock Simalcrum, handouts, and a book full of Strangers on the Train to plague your players with. The reprint boasts updates to some of the existing scenarios, six new scenarios, extra maps, a player-specific Traveler’s Companion, die-cut Simalcrum, postcards, a matchbook, luggage stickers, all the Keeper aids in the original, and more. This campaign will keep you busy for a long, long time. There could be years of play here.

You start the campaign wanting to find out what happened to your friend, Professor Smith. Ruffians burned his house down, and threaten his life, all because he dared to track down the infamous Sedefkar Simalcrum, a cult artifact that promises unimaginable power to whoever can put it back together again. At the moment it’s scattered across Europe, but the Professor thinks he knows where most of the pieces are, and how to destroy them. Unfortunately the latest cult attack left him incapacitated with third degree burns over most of his shattered body, so it’s up to the players to collect the missing bits, before some evil madman reassembles it and gains ultimate power. 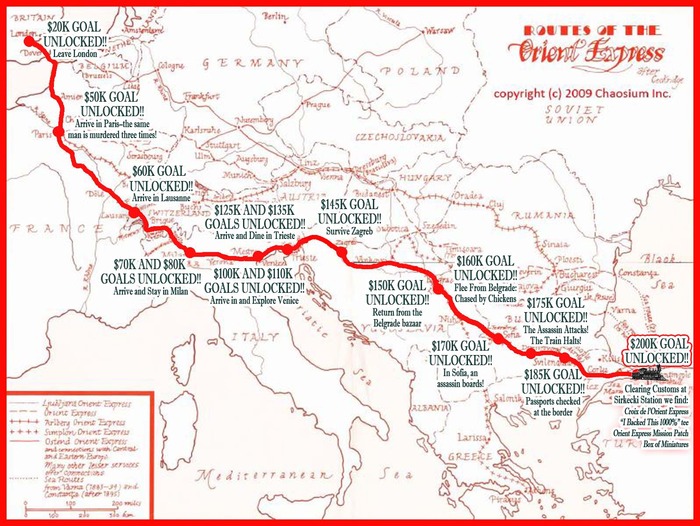 Once the plot’s established the players explore Europe aboard the famous Orient Express train which, as luck would have it, is going to almost every destination the characters need to get to. On the way they’ll encounter movie stars, opera singers, honeymooners, spoiled children, corpses (animate and otherwise), spies, cultists, ghosts, witches, anarchists, pickpockets, and one very determined revenant. Will the characters succeed? Will their flayed skins, left on some blood-encrusted altar, be the only sign that they failed?

There isn’t space here to go over every single scenario in the book. I will say that, where the reprint expands on the original scenarios, it’s almost always for the better. Either the new material adds to and explains part of the plot which otherwise would have confused everyone, including the Keeper, or it adds new scares in what’s otherwise a pretty quiet scenario.

The use of 7th Edition rules exclusively may be a sticking point for some. If you’ve played CoC then you know that, for the last 30-plus years, the system mechanics really haven’t changed at all, but 7th — which isn’t even in print at time of writing — introduces a lot of new rules and changes character creation. It’s not impossible to convert 7th back to 6th Edition, and OE anticipates this with a section that shows you how to do just that. It does mean that Keepers used to the old way of doing things need to keep an eye out for changes. For example, the concluding scenario can end with a contest of wills (POWer vs POWer) between the antagonist and a player. In Ye Olde Days that meant comparing the two stats and making a single roll based on that comparison. In these shiny modern times there are two rolls, and the results of those rolls are compared to see who got the better result. People used to the previous system need to be careful, or be caught out.

The new scenarios are all optional. None of them directly affect the main plot, and several of them anticipate using pre-generated characters unrelated to the ones in the main campaign. There are flashbacks to Professor Smith’s first adventure on the Victorian Orient Express, flashbacks to Constantinople in the First Crusade when the Simalcrum was created, flashbacks to Constantinople in 330 AD when one of the campaign’s major antagonists first appears, a Dreamlands scenario set on alternate Orient Express, and one extra scenario set during the events of the main campaign. There’s also a modern day scenario, as an added bonus for those who just can’t get enough.

They’re all lots of fun, with the exception of the modern day scenario, which falls flat. Maybe it’s not the scenario’s fault, but after countless hours of crazy, facing off against everything from animate piles of human skin to raging chickens from Hell, the events of The Simalcrum Unbound feel remarkably tame by comparison.

The Dreamlands Express is another problem scenario, but not for the same reason. It’s brilliantly written, don’t get me wrong, but imagine what would happen if, during Murder on the Orient Express, just at the point where Hercule Poirot sees the corpse for the first time, someone splices in My Neighbor Totoro right when the catbus turns up. It’s a complete tonal shift, with almost no relevance to the main plot, and it doesn’t help that, although there are several other OE scenarios set on the train that reference the Dreamlands, the Dreamlands Express doesn’t turn up again. The Keeper will need to do some work to integrate this one; it can be done, and will probably pay off big time since, as mentioned, it’s brilliantly written. 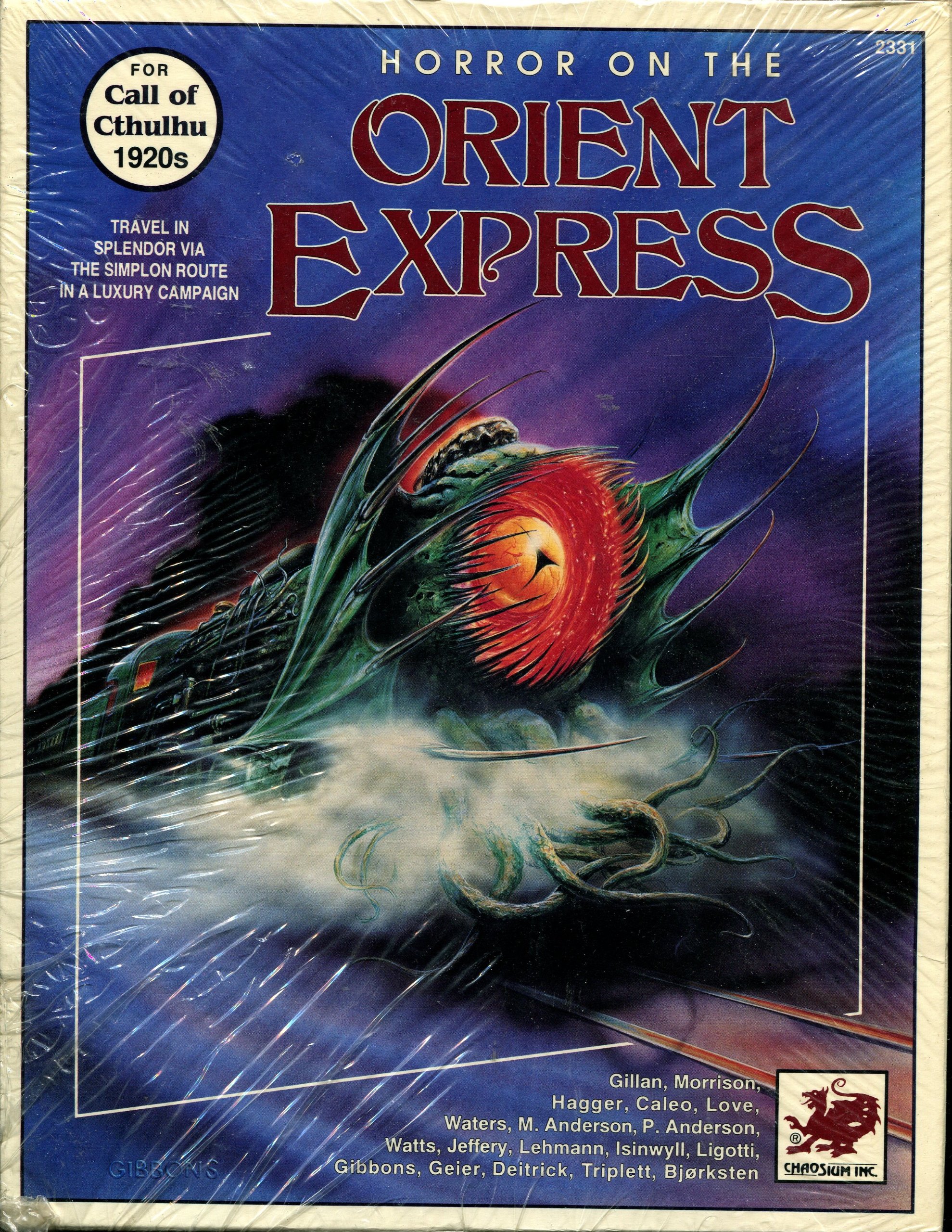 Speaking of the Dreamlands, there’s one Dreamlands-set scenario, a favorite of mine, which often gets ignored because of its problems: In a City of Bells and Towers. It’s heavily influenced by the writing of Thomas Ligotti, in particular his short story The Journal of J.D. Drapeau, which is quoted more than once in the original scenario; the Drapeau references are interesting, but irrelevant to the plot. That said, the biggest problem with the original’s mechanical: it reduces the climax to a series of die rolls, failure being punished severely. The new version is much less punishing, and the Drapeau references are expunged, replaced with musings more relevant to the campaign.

Internally the layout and artwork is a massive improvement on the original. The 1991 edition had to make do with black & white drawings, but the new version goes all-out to impress with new art, reprints of some of the best of the old art, period photographs, extra maps … God, those maps. Whoever had the idea of reproducing the building schematics and train diagrams as architectural drawings deserves a medal. It just looks so much better, and adds that extra touch of authenticity.

Should you get this? First answer me this question: do you already have the 1991 boxed set, and can’t stand 7th Edition? I mean really can’t stand, as in loathe, as in would rather bathe your eyes in acid than look upon its heresy? Then maybe you should think really carefully about this, but I put it to you: is your hatred of the new system so virulent that you’re willing to pass up on tons of cool new stuff as well as improved versions of the old? At least consider getting the .pdf version rather than the box set. The .pdfs are on sale now, though the quoted price seems remarkably high; Chaosium has confirmed this is the intended price tag.

What if you don’t have the original? Then provided you’re willing to swallow that price tag, this campaign’s for you. Don’t get me wrong: there’s a lot of great scenarios here, plus the fancy die-cut Simalcrum and all the extra goodies. You will spend months if not years playing through it. It probably is worth that kind of money. I just look back at when I started playing and ask myself, if this thing had cost over a hundred bucks when it first came out, would I have bought it? Maybe. It’s definitely a luxury item.

I will say this: if you do pony up for the box set, you won’t regret your purchase.

One final word: it’s on preorder right now. Chaosium’s spent a lot of time bringing this to market, and there have been a couple blown delivery dates. The next due date is very soon, at time of writing. If prompt delivery is a concern, wait till the preorder period is over and the thing’s actually on sale, then make a purchase. That way you know when it’ll turn up on your doorstep, ready and eager to put the fear of Cthulhu into your unsuspecting players.