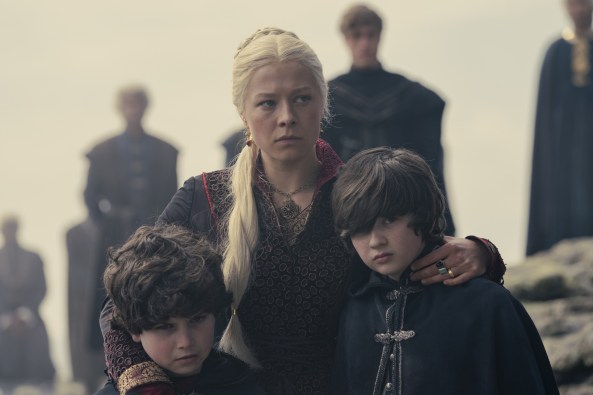 This discussion and review contains spoilers for House of the Dragon episode 7, “Driftmark,” on HBO.

One of the structural advantages that House of the Dragon has over Game of Thrones is that the show’s storytelling makes it easier to build entire episodes around particular themes and ideas. As the scope and scale of Game of Thrones expanded, the show featured a vast ensemble scattered across multiple plot threads running in parallel across various continents. Individual episodes could occasionally feel like short anthology films, collecting four or five mini-episodes each week.

In contrast, the tighter focus and more contained nature of House of the Dragon allows the show’s installments to feel more like conventional television episodes. They are organized around particular events from this chapter of the history of House Targaryen, with “Second of His Name” joining King Viserys (Paddy Considine) on a royal hunt while “We Light the Way” was largely built around the royal wedding of Princess Rhaenyra Targaryen (Milly Alcock) to Laenor Velaryon (Theo Nate).

This isn’t to suggest that these episodes are self-contained or standalone. “Driftmark” picks up directly after the end of “The Princess and the Queen.” The entire episode focuses on the funeral for Leanna Velaryon (Nanna Blondell), who burned herself alive at the end of the previous episode. Indeed, the faked death of her brother Laenor Velaryon (now played by John Macmillan) at the end of “Driftmark,” his body burning in the family fireplace, offers a haunting echo of Leanna’s passing.

Still, the show’s structure allows each episode of House of Dragon to have its own thematic concerns. At the end of “The Princess and the Queen,” two households are destroyed by flame, the power that holds House Targaryen together. Leanna burns herself alive with dragonfire. Larys Strong (Matthew Needham) burns his brother Harwin (Ryan Corr) and his father Lyonel (Gavin Spokes) alive in the family fortress of Harrenhal, to secure the favor of Queen Alicent (Olivia Cooke).

Both Game of Thrones and House of the Dragon derive from author George R.R. Martin’s epic fantasy saga, A Song of Ice and Fire. Understandably, ice has been largely absent from House of the Dragon. There have been a few references to “the Wall,” but House Targaryen is naturally uninterested in what is happening to the extreme North of Westeros. The show’s iconography has been more autumnal than wintry, focusing on falling leaves rather than falling snow.

“Driftmark” suggests that the opposite of the fire that powers House Targaryen is not ice. Instead, “Driftmark” returns time and again to water imagery. The entirety of the episode takes place on the eponymous island, as House Velaryon mourns the passing of Leanna. It is bookended by scenes in and around water, with Leanna’s body consigned to the depths of the bay at the start and with Ser Qarl Correy (Arty Froushan) fleeing across the water with a disguised Laenor.

“Driftmark” returns repeatedly to the idea of water as a force that stands in opposition to fire. This is most obvious in the episode’s late conversation between Rhaenyra (Emma D’Arcy) and her uncle Daemon (Matt Smith). “Fire has such strange power,” she admits. “Everything that House Targaryen possesses is owed to it, yet it has cost us both what we loved.” Daemon replies, “Perhaps the Velaryons knew the truth of it: The sea is the best real ally.”

Fire gives House Targaryen the power to literally reshape the world to their whims and to reduce their opponents to ashes. However, “Driftmark” suggests that even such awesome power must eventually surrender to more primal forces. As the eulogy at the start of “Driftmark” reminds the assembled nobles, “From the sea we came. To the sea we shall return.” Leanna’s sarcophagus tumbles into Blackwater Bay, joining centuries’ worth of caskets containing her ancestors.

Martin has been quite candid that he originally wrote A Song of Ice and Fire as a metaphor for climate change, a cautionary tale about the way in which political squabbling can prevent societies from reckoning with more existential threats. One of the bigger threats posed by climate change is the danger of rising sea levels, the idea that the water might rise up and reclaim the world that people have built. One cannot negotiate with the tides. Water takes back everything in time.

Water obviously drowns fire, and the emphasis on water in “Driftmark” only deepens the episode’s funereal tone. It underscores the sense of grand tragedy that runs through House of the Dragon. After all, the first episode of Game of Thrones established that whoever wins the looming struggle for the throne doesn’t really matter, as House Targaryen will be overthrown. Indeed, the end of House of the Dragon was somewhat casually revealed in a throwaway line from Game of Thrones.

“The Velaryons are of the sea,” Rhaenyra appeals to Daemon. “But you and I are made of fire. We have always been meant to burn together.” Of course, all flames are extinguished in time. In the end, there is only ash and water. The sea will remain. Rhaenyra herself seems to grasp this, confessing to her uncle that “fire is a prison; the sea offers an escape.” After all, water washes and absolves. It baptizes. It cleanses in a much less destructive manner than fire.

Of course, “Driftmark” doesn’t just contrast water and fire. Fire is only half of House Targaryen’s claim to power. After all, the show is an adaptation of Martin’s history of the royal family, titled Fire & Blood. The old cliché argues that “blood is thicker than water,” even if the phrase’s modern meaning is the exact opposite of the original assertion that “blood of the covenant is thicker than water of the womb.” “Driftmark” suggests that even blood ties can be diluted and weakened.

Much of the drama in the second half of “Driftmark” derives from the tension between actual blood lineage and public perception of those ties. Princess Rhaenys Targaryen (Eve Best) and her husband Lord Corlys Velaryon (Steve Toussaint) argue over how best to protect their family. Rhaenys argues that they should allow Daemon and Leanna’s daughter Baela (Shani Smethurst) to inherit Driftwood, completely bypassing Rhaenyra and Laenor’s sons Lucerys (Harvey Sadler) and Jacaerys (Leo Hart).

Rhaenys’ argument is that Jacaerys is not actually Laenor’s son. He was conceived as part of a long-running affair between Rhaenyra and Harwin Strong (Ryan Corr). As such, there is no blood connection between Corlys and his grandson. In contrast, Baela is Corlys’ granddaughter by blood. In some ways, this is a clever extension of House of the Dragon’s fascination with the gender politics of feudal power structures, where basic biology means that lineage is always clearer from mother to child.

“Rhaenyra’s children are not of your blood, but Laeana’s are,” Rhaenys warns her husband. “They are her legacy.” Of course, acknowledging the reality of the situation would challenge the patriarchal power structures of Westeros, because it would mean that identity could only be assured from mothers rather than fathers. As such, it is no surprise that Corlys pushes back strongly against this idea. “History does not remember blood,” he insists. “It remembers names.”

James Hibberd argued that House of the Dragon was about how “patriarchy would rather destroy itself than see a woman on the throne.” “Driftmark” pushes that idea to its absurd extreme, where Corlys would rather disinherit his own family members than acknowledge his daughter-in-law’s sexual agency. The illusion of patriarchal power must be maintained, even if the cost of that lie is the complete erosion of any actual power to protect and preserve that family unit.

This plays out again in the big family argument following the loss of Aemond Targaryen’s (Leo Ashton) eye. Viserys finds himself caught in the middle of an argument between his wife Alicent and his daughter Rhaenyra, with Alicent publicly voicing accusations concerning the parentage of Rhaenyra’s sons. The resulting spectacle is humiliating for everybody involved, with only Alicent managing to draw blood from her old friend Rhaenyra.

“Driftmark” cynically suggests that, despite the laws of the realm, blood doesn’t actually mean anything in the world of Westeros. Those ties can be diluted and washed away. In that sense, the water imagery is also evocative. Daemon conspires to convince Correy to turn on his lover Laenor with the promise of a fresh start. “There are places across the Narrow Sea where it doesn’t matter what a man’s name is, only how much gold he possesses,” Daemon urges. That, it seems, is enough.

Indeed, “Driftmark” suggests that there is some truth in Rhaenyra’s understanding that “the sea offers an escape.” When Ser Criston Cole (Fabien Frankel) offered Rhaenyra a way out of the politicking in “We Light the Way,” he made the offer on a boat and promised to take her across the ocean. Similarly, when Daemon told Leanna about how free he felt in “The Princess and the Queen,” he was speaking from the comfort of Pentos across the Narrow Sea.

In the closing moments of “Driftmark,” having faked Laenor’s death, both Correy and Laenor take that escape, as the rest of the cast find themselves drawn closer to the flames.