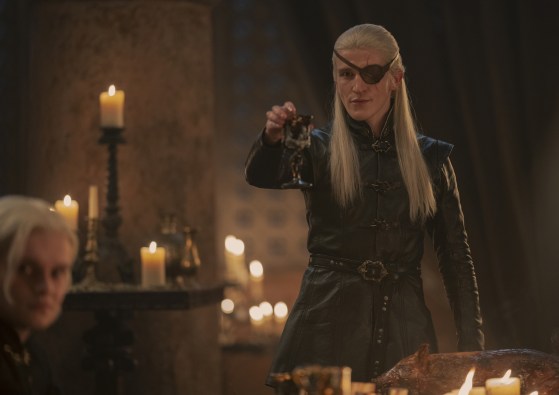 This discussion and review contains spoilers for House of the Dragon episode 8, “The Lord of the Tides,” on HBO.

“The Lord of the Tides” begins with the last major time jump of the season and ends with what appears to be the last breath of King Viserys Targaryen (Paddy Considine). It seems to mark the true beginning of the long-promised “Dance of Dragons,” particularly if House of the Dragon follows the classic Game of Thrones format of cramming the season’s penultimate episode with seismic events and devoting the finale to picking up the pieces.

“The Lord of the Tides” features the year’s last major rotation of the primary cast. Tom Glynn-Carney debuts as Aegon Targaryen, replacing Ty Tennant. Ewan Mitchell assumes the role of Aemond Targaryen, succeeding Leo Ashton. On the other side of the looming civil war, Harry Collett replaces Leo Hart as Jacaerys Velaryon and Elliot Grihault steps in for Harvey Sadler as Lucerys Velaryon. The players assembled, the dance can begin.

In a sense, the first eight episodes of House of the Dragon, if not the entire first season, are an extended prologue. According to co-showrunner Ryan Condal, the first attempt to adapt the “Dance of Dragons” from George R.R. Martin’s Fire & Blood began with the death of King Viserys, an event that now arrives in the final moments of the eighth of the first season’s 10 episodes. He credits HBO for allowing the creative team to instead tell the story in a “really patient and character-driven way.”

Given casting and writing concerns, Condal described this first year as “the hardest season that (he has) ever had to participate in structuring.” There are indications that the following seasons of the show (which may run “three or four seasons”) will be more conventional. “Once we make the jump, we’re in,” Matt Smith told Happy Sad Confused. “I’m pretty sure from then on there’s not any big huge time jumps, particularly next season and the one after.” 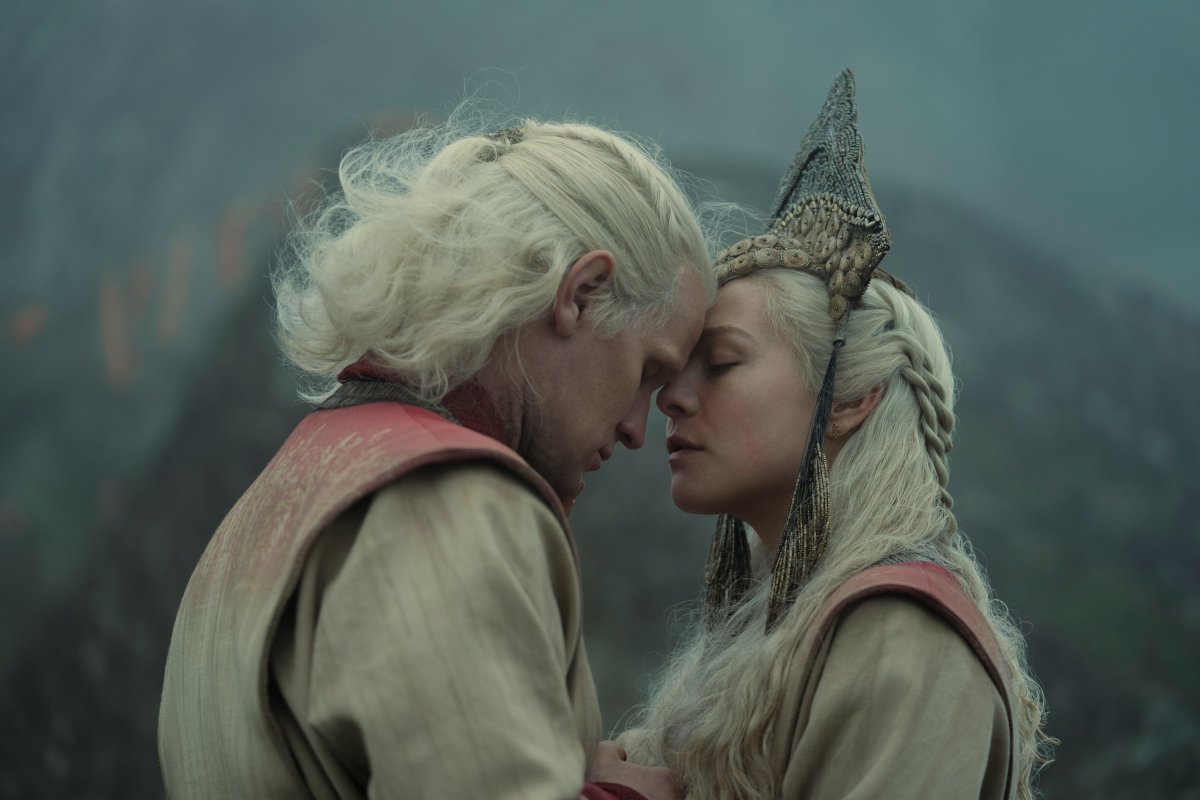 It is a testament to the quality of these eight episodes that it almost feels a shame to transition to a more familiar narrative model. These episodes have followed the fortunes of House Targaryen, along with those caught in their orbit, over decades. Each of these installments has been built around a single inciting incident or event, but the eight episodes as a whole have provided a window into the dynasty. The viewer is invited to witness what changes over time — and what doesn’t.

Many of these episodes have played out tragedies in miniature, foreshocks of the seismic catastrophe that is about to hit Westeros. These episodes have covered almost a lifetime of political events: weddings, funerals, wars, scandals. Many of these events, in isolation and scattered over decades, threatened the stability of the realm. Dread hangs in the air, as inescapable as Rhaenyra (Milly Alcock) flying Syrax over King’s Landing in the opening moments of “The Heirs of the Dragon.”

“The Lord of the Tides,” what feels like the last episode before the main event begins in earnest, is a case in point. In many ways, the episode’s inciting plot offers a taste of what awaits House Targaryen. When Corlys Velaryon (Steve Toussaint) is seriously wounded, House Velaryon is thrown into a succession crisis. As Corlys’ daughter Laena (Nanna Blondell) is dead and his son Laenor (John Macmillan) is believed dead, his younger brother Vaemond (Wil Johnson) seeks to claim the title.

This indirectly presents a threat to Rhaenyra’s (now played by Emma D’Arcy) potential succession of her own father. To assert his own claim as Lord of the Tides, Vaemond must dispute that made by the children produced during Rhaenyra’s marriage to Laenor. Disinheriting Jacaerys, Lucerys, and Joffrey would be tantamount to arguing for their illegitimacy, confirming that they are not the children of Laenor, but instead the result of Rhaenyra’s affair with Harwin Strong (Ryan Corr). 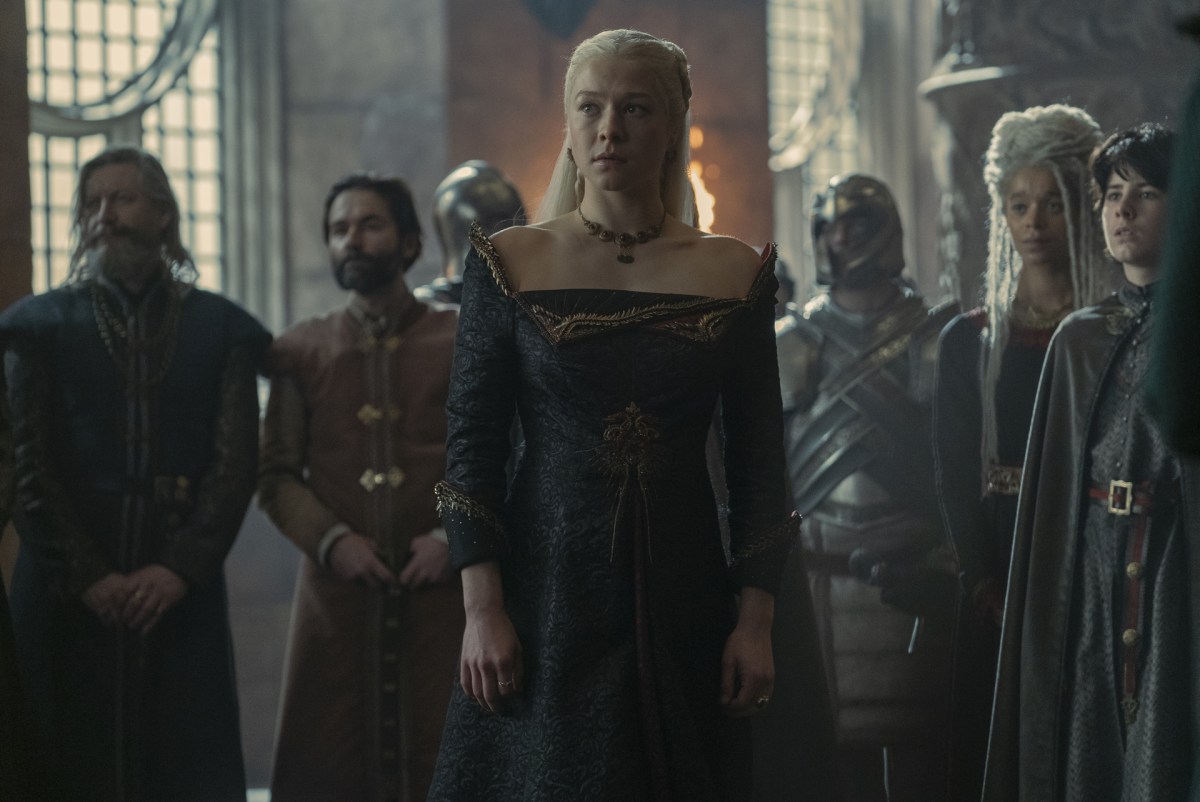 Still, all of this is incidental to Vaemond. When Rhaenyra worries about the implications of Vaemond’s actions, Daemon (Smith) reassures her, “Vaemond cares only about Driftmark and the Velaryon line, not about our politics.” Nevertheless, House Targaryen is so volatile that even a power struggle within one of its closest political allies could light a match within the tinder box. However, Vaemond’s challenge also plays out the central tragedy of House of the Dragon in miniature.

History may not always repeat, but it does rhyme. With Vaemond threatening to disinherit his elder brother’s grandchildren, this is the second time that Corlys’ wife, Princess Rhaenys Targaryen (Eve Best), could see herself marginalized by a man with a technically weaker claim, following the Great Council of 101 AC. “The Lord of the Tides” centers this plot around Rhaenys. Corlys does not appear at all in the episode, with the opening scene focusing on Rhaenys hearing the news of his injury.

There is a grander irony at play in “The Lord of the Tides.” In her opening narration of “The Heirs of the Dragon,” Rhaenyra noted that “the only thing that could tear down the House of the Dragon… was itself.” Throughout “The Lord of the Tides,” Vaemond makes grand statements about the historical significance and lineage of House Velaryon. He places his family in its important historical context, as one that has been intertwined with House Targaryen since before the two came to Westeros.

“This is about the future and survival of my house, not yours,” Vaemond warns Rhaenyra. Later, he directly challenges Viserys, “You may run your house as you see fit, but you will not decide the future of mine. My house survived the Doom and a thousand tribulations beside. And gods be damned, I will not see it ended on the account of this.” There is no small irony that Vaemond’s pride and arrogance are the greatest threat to the stability of House Velaryon. 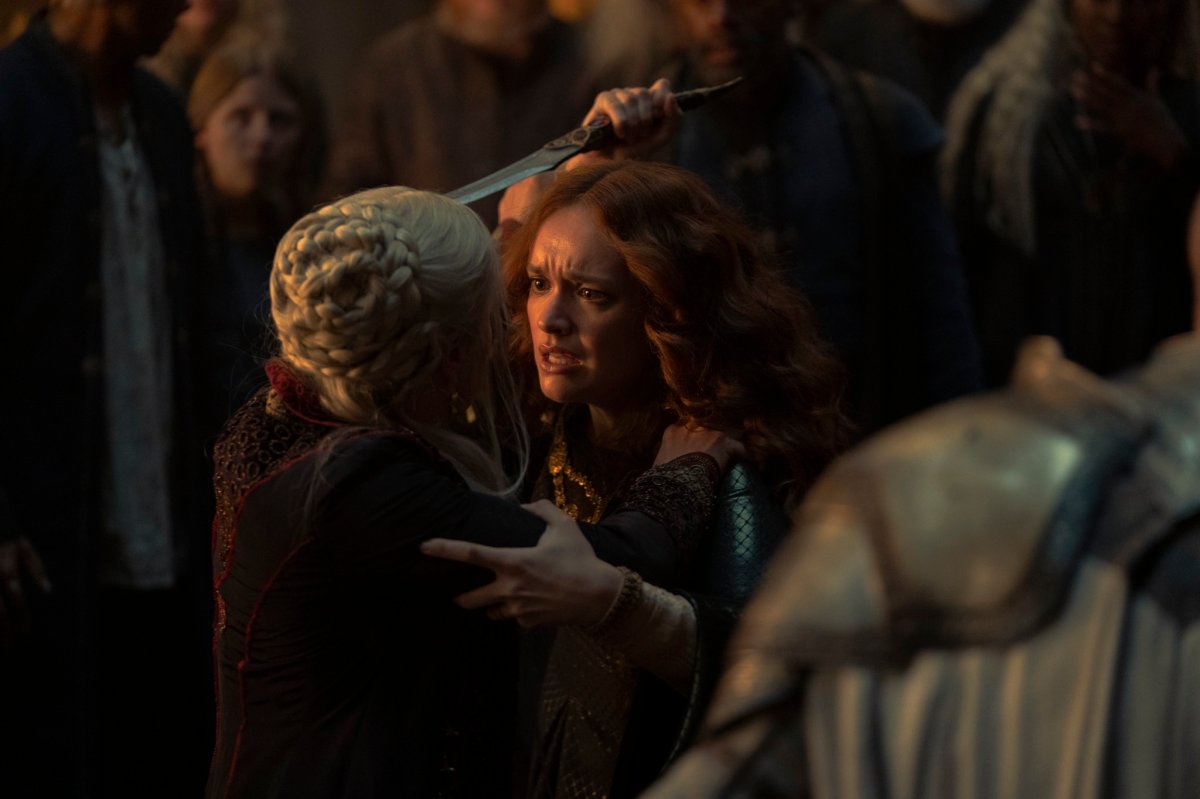 Vaemond is goaded into voicing claims of Jacaerys’ and Lucerys’ illegitimacy, leading Daemon to chop his head in half. With Corlys on the verge of death and Vaemond publicly murdered for slander, House Velaryon would seem to be in chaos. Rhaenys, who is by blood a Targaryen, assumes de facto control, while Corlys’ grandchildren-by-blood, Baela (Bethany Antonia) and Rhaena (Phoebe Campbell), are still very young. The only thing that could tear down House Velaryon was itself.

This is one of the show’s dramatic ironies. Despite being deposed, House Targaryen survives into Game of Thrones as a power player through Daenerys Targaryen (Emilia Clarke). In contrast, viewers intuitively understand they are seeing House Velaryon and House Hightower at the peak of their influence. Obsessive Game of Thrones fans can follow both House Velaryon and House Hightower into the later show, but neither is a player of major significance. What do Hightowers do, but fall?

This feels like the perfect closing chapter to what is effectively the prologue to House of the Dragon, affording the primary cast a low-stakes glimpse of tragedies yet to come. Viserys appears to understand the importance of this. His last official duty is to preside over the succession crisis within House Velaryon. He uses the occasion as an opportunity to gather all of his family together and make one last plea for unity, perhaps hoping Vaemond’s folly might be a cautionary tale.

One of the big talking points of this television season has been the perceived contrast between House of the Dragon and The Lord of the Rings: The Rings of Power, two big-budget epic fantasy shows broadcasting in parallel. Obviously, there is room for both on the schedule, but comparisons are inevitable. Notably, in its two most recent episodes, “Udûn” and “The Eye,” The Rings of Power has leaned into its own particular strengths: the sorts of scale and spectacle that $715M can buy. 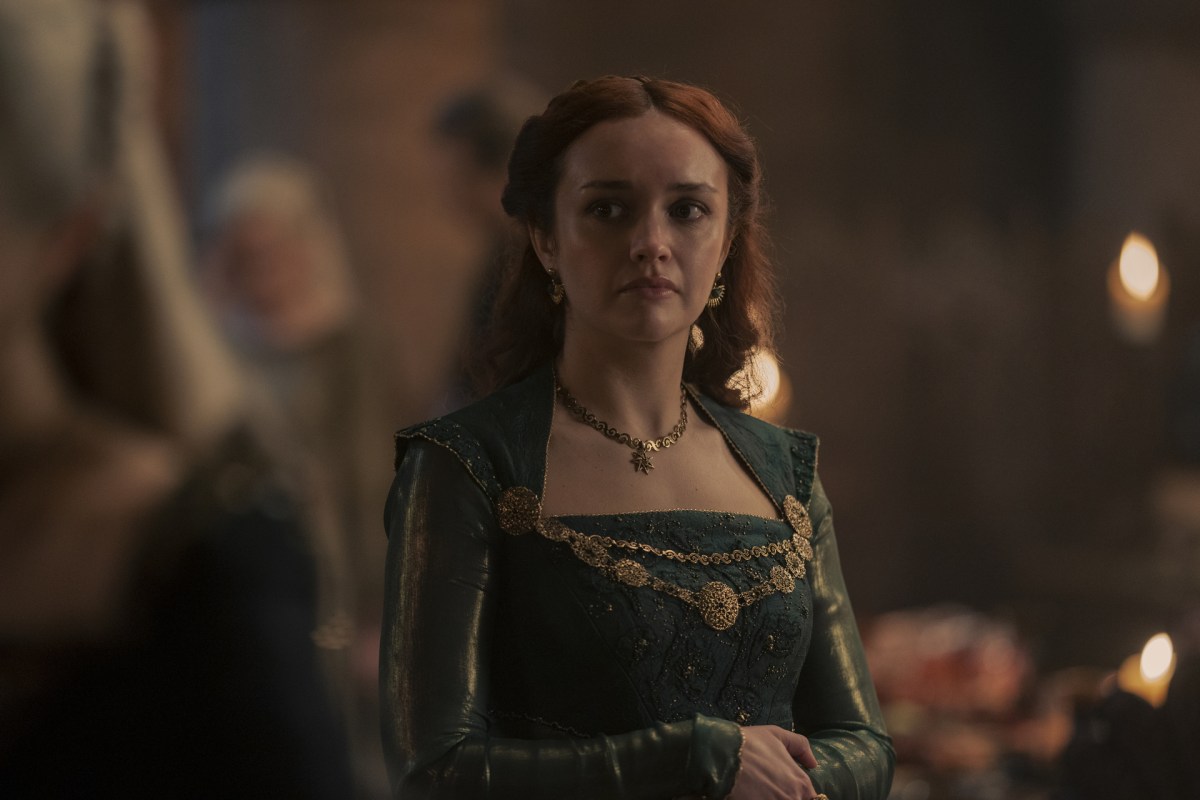 Fittingly, both “Driftmark” and “The Lord of the Tides” have allowed House of the Dragon to celebrate its own secret weapons: locking great actors in rooms together and having them exchange words and threats. The “eye for an eye” scene in “Driftmark” was one of the show’s best scenes to date, bringing most of the cast together to work through some tension. The dinner scene in “The Lord of the Tides” does something similar, allowing most of the primary cast to share a table.

One of the secrets of both Game of Thrones and House of the Dragon is an understanding that there is a subtext of violence and brutality that underpins even mundane interactions, tucked away beneath the social norms and regal pantomime. This was very literally true of Rhaenyra’s auditioning of her suitors in “King of the Narrow Sea” and of her wedding in “We Light the Way.” The dinner table in “The Lord of the Tides” is its own battlefield, just like the royal court was for Vaemond.

Viserys hopes to reconcile his family, including his daughter Rhaenyra, his brother Daemon, and his wife Alicent (Olivia Cooke). Indeed, Rhaenyra and Alicent seem to be close to a breakthrough over dinner, with Rhaenyra acknowledging the “love and honor” that her old friend has shown to Viserys. There is even a note of optimism as Rhaenyra makes plans to return to King’s Landing after seeing her children home, perhaps hoping to rekindle the friendship that the two shared as children. 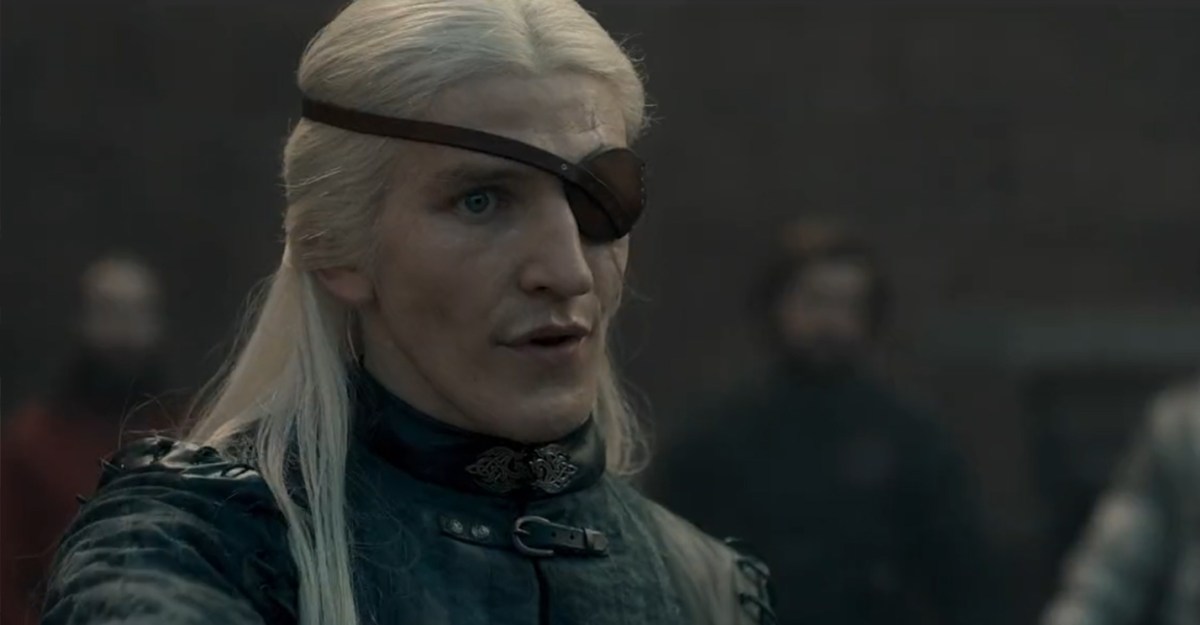 Of course, it is far too late for that, even before Viserys passes away. Indeed, in one of the episode’s darkest visual jokes, Viserys is escorted to his chambers just as a roasted pig on a spit arrives at the table. Viserys has always been an impotent king, a passenger in history. “The Lord of the Tides” goes further and suggests that what happens next is outside the control of even Rhaenyra and Alicent. It is too late for either woman to change the course on which they have set the family.

After all, Rhaenyra and Alicent have already passed down the feud to the next generation. Just as the parents are reconciling, the children are at odds. Aegon mocks Jacaerys’ betrothal to Beala, playing on the young man’s anxieties. Still understandably bitter about losing his eye in a fight with them, Aemond goads Jacaerys and Lucerys with a toast celebrating those “Strong” boys. At this point, the family feud exerts a force like the tide; any attempt to assert control over it is folly.