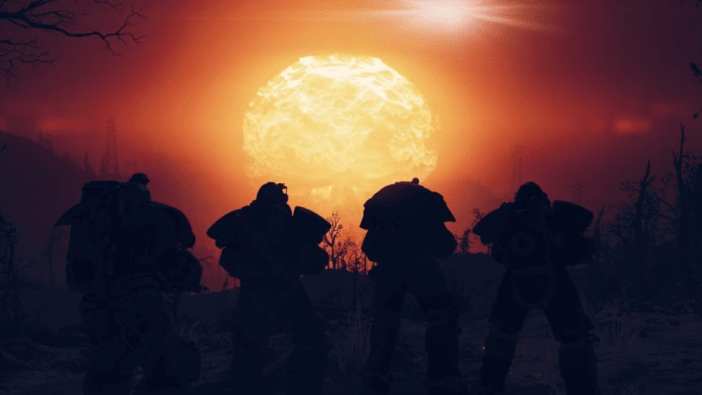 This is not a eulogy for Black Isle Studios, the creators of the original Fallout games. Nor is it a paean for the good, old days of turn-based isometric RPGs. The games still exist. And folks like Brian Fargo are making more. If that’s your thing, enjoy. It’s there for you.

This is a story about how my love for the world of Fallout died, how Fallout 76 didn’t so much kill it as bury it, and an attempt to burn those who engineered its demise in effigy.

Bethesda taking over the Fallout license to make a first and/or third person shooter experience seemed like a great thing. Bethesda’s The Elder Scrolls series is expansive in every sense, rich with lore, full of surprises and adventure. They create worlds worth exploring, making them a sure fit for a new Fallout world. And yet from the start, there were subtle signs that something was off. Playing Fallout 3, the “Bloody Mess” perk felt a little too exuberant, zooming in on the carnage in “cinematic mode”. The Vault Boy kitsch skewed slightly too ebullient. The narrative lines drawn between “good” and “bad” felt a smidge too sharply drawn.

Let’s make one thing clear: I didn’t bemoan the lack of an option to kill children in Bethesda’s Fallout games, but those who did had a point. The original Fallout games were dark. Dark as fuck. Just downright bleak. Yes, they were full of jabs at mid-century American bombast, but those jabs landed with a dry chuckle and left a bitter aftertaste. The joke, they seemed to say, was ultimately on you, sitting in America, enjoying the fruits of that bombast. It took apart Manifest Destiny by showing the inevitable end result, leaving you to draw your own conclusions about whether or not we’re the good guys.

Bethesda’s Fallout, instead, hears the whispers of hubris inherent in Fallout’s lessons of post-World War II Americana and amplifies those whispers to a shout, drowning out the lesson or insight within them. Bethesda’s Fallout’s jabs at mid-century Americana aren’t at the expense of those of us who grew up in it, but rather those who don’t buy into it. And they aren’t subtle jabs so much as graceless haymakers, landing with a guffaw and a wave of nausea. In Fallout, the atomic-fueled techno-consumerism of the late 21st Century is both setting and antagonist. The world “before” was both awesome and terrible. Its masters beneficent and cruel. In attempting to solve humanity’s problem through science, they ultimately created new ones, amplified the old ones, and almost exterminated humanity in the process. In Bethesda’s Fallout, you can not only pick up where the 21st Century left off, but you can try most of its failed experiments over again, and purchase the fruits of those once-doomed dalliances in stores. In real life.

For a decade now, Bethesda has drawn the series farther and farther back into the vault, forgetting or ignoring the subtext of the original series; that the vault itself and everything it represents is what doomed mankind. In the original Fallout games, VaultTech and RobCo were (typical for the mid-’90s) arch villains of techno-capitalism dooming humanity in search of profit, and ultimately failed to save the planet from disaster because they were the disaster themselves. That the Vault Dweller is able to survive through careful applications of ancient tech is beside the point. The goal in both games was self-sufficiency. Of finding a way to survive in what was left of the doomed world, not necessarily recreating what was there before. That the tech existed was a fact of post-apocalyptic life, but the real question was in whose hands it belonged, and what those hands would do with it. And the answers were not simple multiple choice. In Bethesda’s Fallout, the pre-apocalypse corporations failed only for lack of trying hard enough, and your goal, as a survivor, is not to learn from the past and make better choices, but to simply try again. It asks you to push every button, unlock every door, and launch every missile because they’re there, and, well, why not? Bethesda’s games are unconcerned with exploring why those destructive things were ever built in the first place.

In Fallout, you are forced out of the safety of the Vault because it is dying. It was never intended to function for hundreds of years, and it is your job now to find a means to fix it so that your people, who have grown reliant upon it, do not die. In the end, they neither want to alter that reliance, nor learn for it. They cast you out for good, sealing themselves back inside for another however many years, pushing the problem into the future, and onto someone else’s plate.

In Fallout 3, you leave the vault because … I dunno. Why not? And you must solve the “water problem” once and for all using war tools created by the pre-Apocalypse civilization. Fallout introduced the concept that genetic engineers created the race of super mutants by accidentally unleashing a powerful biological agent designed to protect against other biological agents. Fallout 3 suggests: “Hey, what if we could unleash another biological agent to fix the world?” And then it says go do it. And you do. And the problem is solved. The end. In the original Fallout, your success at saving your people from a self-imposed dilemma has an unintended side effect of proving humanity’s inherent problem: itself. In Fallout 3 your success proves everybody who came before you just wasn’t trying hard enough.

Fallout 4 takes you even further backward (metaphorically) to the relative safety of a fully functioning science lab that was not merely recreated after the apocalypse, but survived the effects of history completely intact and is working to not simply revive the experiments of the past, but to surpass them. And it has already succeeded before you’ve really played the game. You, the vault dweller, survived for centuries by virtue of a successful Vault-Tec experiment whose only flaw was you weren’t told about it in advance. You are given the option to join with one or another faction fighting to reclaim the post-apocalyptic Commonwealth. Yet the existence of four separate factions doesn’t foster a sense of moralistic ambiguity so much as let you choose one of four bad choices. Each faction’s ultimate goal is the obliteration of one or more of the others, and not for reasons that are vague or nuanced, but because the fate of humanity requires destroying a significant fraction thereof. This is the exact same thinking that led to the Great War in the first place.In the world of the original Fallout, your ultimate goal was to survive, and the machinations of powers greater than yourself in both past and future were merely obstacles to either avoid or overcome. In Bethesda’s Fallout, your goal is not to avoid or overcome the results of past mistakes, but to become an even better version of what the powerful forces of the past even imagined. “Mistakes were made,” it seems to say, “but this time it will be different.”

hematically, Fallout 76 has brought us to the logical end of Bethesda’s reverent fascination with the pre-apocalypse. You are not so much a “survivor” of the catastrophes of the past, but an active participant, let loose from the Vault to exact revenge on anyone without the foresight to buy into the Vault-Tec promise. Worse, while all of the creatures and entities of the Fallout IP are here — whether they canonically belong in this time and place or not — your goal is not so much to join or thwart them, but to fucking kill them all because guns. Or you can nuke them. Or you can nuke yourself and your friends. Because who cares? The nuclear weapons, future tech, and organizations that were created before the war, caused the war, and ultimately led to humanity’s near extinction are no longer “bad” but “fun!” And the sense of having barely escaped mankind’s interminable slouch toward its inevitable, self inflicted end has been replaced with an effusive sense of whimsy.

In the original Fallout, the world was destroyed by those who believed themselves greater than gods, and the ruins they left behind were ancient, dangerous, and shrouded in mystery. In Bethesda’s Fallouts, and culminating in Fallout 76, the ruins of the ancient world are neither ruined, nor ancient. The only danger is someone else will get to the nukes left behind before you do. There is no mystery. The instigators of mankind’s demise have not so much disappeared as simply ventured out and left the door unlocked. You aren’t rebuilding the world in the wake of mankind’s folly so much as returning to your beach house after a hurricane; an inconvenient, if momentary setback.

Fallout 76 is a lot of things, but the thing it is most is “not Fallout.” The act of playing it is to slowly unearth the painful realization that Bethesda has been sucking the soul out of the brand for over ten years, and in the process injecting its own irreverence for not only the world it acquired, but for the lessons those games were trying to impart. For all of those years, I have been playing (and enjoying) each new installment while hoping that around the next corner, over the next hill, down the next elevator shaft, or through the next DLC, I might find the ghost of the Fallout that once was. Instead, after a short pause for loading, I’ve found only a bobblehead.

And if you’re wondering why Fallout New Vegas hasn’t yet made an appearance in this metaphorical effigy, it’s because that game is the exception which proves the rule. While New Vegas does embody some of the reverence of the pre-Apocalypse world’s grandeur, it doesn’t ask you to do the same. Your role in its world is as an observer, not an instigator. While there are multiple sides with which you may align, and help to pursue their ambitions ends, you are also given the option to simply let whatever is going to happen happen and take no (or minimal) part. It’s a game that seems to simultaneously revive the complicated morality of the original Fallouts while wearing the clothes of the new ones. And, after playing over a thousand hours combined in every Fallout game ever made, I argue it’s the best of the series. In spite of Bethesda’s liberal application of kitsch.

Don’t get me wrong: the kitsch itself is not the problem. Neither is Bethesda’s strategy of taking an established property, modernizing the mechanics, and laughing all the way to the bank. This strategy did, after all, work wonders for Doom. But the original Doom, for all its accomplishments, wasn’t really about anything. Its pretensions to a morality tale were just that: pretensions.

Fallout, on the other hand, had something meaningful to say. In attempting to render the world of Fallout as a playable, purchasable, and collectible thing, Bethesda has merely succeeded in depriving it of its voice. And in the process established that it never understood its message to begin with.