Many skills and passive abilities in Diablo 3 include descriptions that measure distances in yards. However, the game offers no easy way to know how far one yard is, which would naturally lead you to assume that it should be intuitive enough to not require further explanation: a yard is a yard, right? Three feet, or roughly one meter.

Well, unless you’ve made some effort to figure out the length of one yard on your own, you’ll be surprised to find out how short the distance is. Going by our real-world comparison, it turns out that your Diablo 3 character is a nine-foot-tall monster.

As a rule of thumb, keep in mind that the radius of a waypoint is 10 yards. For more specific guidelines on how distances are important to each class, let’s take a look at some popular skills.

War Cry: Unleash a rallying cry to increase Armor for you and all allies within 100 yards by 20% for 60 seconds. 100 yards is the full length of your screen, so your War Cry affects off-screen allies. Keep an eye on your minimap – allies up to roughly one-quarter the width of your minimap away from you will be affected by War Cry.

Brawler Passive: As long as there are 3 enemies within 12 yards, all of your damage is increased by 20%. Basically, as a melee character, any enemy that is in range of your damage will count toward this bonus. If you’re attacking a group of at least three monsters, you’ll receive the bonus.

Shield Glare: Light erupts from your shield, Blinding all enemies up to 30 yards in front of you for 4 seconds. 30 yards extends roughly halfway to the edge of your screen.

Condemn: Build up a massive explosion, unleashing it after 3 seconds, dealing 1160% weapon damage as Holy to all enemies within 15 yards. Condemn’s range is fairly short, just slightly beyond the radius of a waypoint. 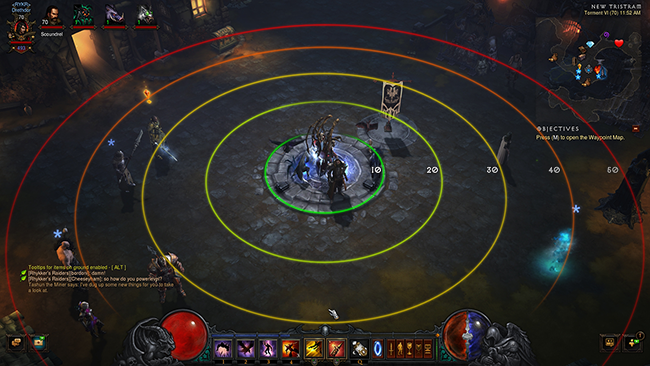 Vault: Tumble acrobatically 35 yards. A single vault will move you roughly two-thirds of the way to the edge of your screen.

Steady Aim (Passive): As long as there are no enemies within 10 yards, all damage is increased by 20%. Given how short 10 yards is, this bonus applies almost 100% of the time, making this passive extremely powerful.

Companion – Wolf Companion: Active: Your wolf howls, granting you and your allies within 60 yards 30% increased damage for 10 seconds. Your allies cannot be much further than half a screen away to benefit from this effect; as a rule of thumb, if you cannot see them onscreen, they likely will not be affected.

Sweeping Wind: Surround yourself in a vortex that continuously deals 105% weapon damage to all enemies within 10 yards. The vortex lasts 6 seconds and is refreshed each time you strike an enemy with a melee attack. Landing a Critical Hit has a chance to increase the vortex effect up to 3 stacks for a total of 315% weapon damage. The visual effect of this attack accurately represents its range – ie, not far at all. You could describe 10 yards as “melee range.”

Dashing Strike: Quickly dash up to 50 yards, striking enemies along the way for 370% weapon damage as Physical. You are able to dash up to just shy of the edge of your screen.

Cyclone Strike: Pull up to 16 enemies within 24 yards towards you, followed by a furious blast of energy that deals 261% weapon damage as Holy. The base effect of this ability pulls in enemies who are up to a quarter of a screen away.

Cyclone Strike – Implosion: Increase the distance enemies will be pulled towards you to 34 yards. This rune increases the distance to one-third of a screen away.

Mantra of Salvation: Passive: You and your allies within 60 yards gain 20% increased resistance to all elements. Your allies cannot be much further than half a screen away to benefit from this effect; as a rule of thumb, if you cannot see them onscreen, they likely will not be affected.

Mantra of Conviction: Passive: Enemies within 30 yards of you take 10% increased damage. 30 yards extends roughly halfway to the edge of your screen.

Soul Harvest: Feed on the life force of up to 5 enemies within 16 yards. Gain 2% Intelligence for each affected enemy. This effect lasts 30 seconds. Soul Harvest’s range is fairly short – one-and-a-half times the radius of a waypoint. The enemies you wish to affect should all roughly be within melee range of each other.

Horrify: Don a spectral mask that horrifies all enemies within 18 yards, causing them to tremor in Fear and be Immobilized for 3 seconds. Horrify’s range extends slightly further than Soul Harvest’s, almost double the width of a waypoint.

Black Hole: Conjure a Black Hole at the target location that draws enemies to it and deals 700% weapon damage as Arcane over 2 seconds to all enemies within 15 yards. Black Hole’s radius is one-and-a-half time’s that of a waypoint.

Teleport: Teleport through the ether to the selected location up to 50 yards away. You are able to teleport up to just shy of the edge of your screen.

Blizzard: Call down shards of ice that deal 1075% weapon damage as Cold over 6 seconds to enemies in a 12 yard radius. Multiple casts in the same area from the same caster do not stack. Blizzard’s radius extend’s slightly further than that of a waypoint.

Blizzard – Apocalypse: Increase the area of effect of Blizzard to a 30 yard radius. Blizzard’s radius is increased to a circle that is wider than half of your screen.

Be sure to check out our ultimate Diablo 3: Reaper of Souls guide to take you from beginner to expert!