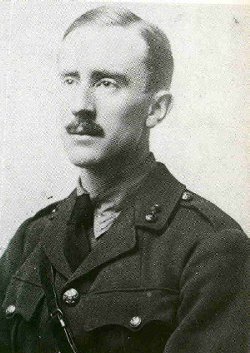 Allying with enemies. Gaining intel on warlords. Tracing their networks. Striking a training camp from the skies and destroying it in a fiery explosion. You’d be forgiven for mistaking this for Afghanistan, but it’s actually Middle-earth: The Shadow of Mordor, a good game with an upside-down theme. While it plays well and has interesting mechanics, Shadow of Mordor falls flat thematically because it transplants a War on Terror mentality to a fantasy world inspired by World War I. As a result, Tolkien’s ideas fall victim to post-millennial cynicism and the game, while enjoyable, feels utterly wrong.

In 1916, Tolkien was in a military hospital recuperating from trench fever. He’d served on the front line at the Somme, taking part in the assaults on Schwaben Redoubt, the Leipzig Salient and Regina Trench before disease knocked him out of the war. The Somme was a nightmare. The British took 57,000 casualties on the first day alone. The lines stagnated, with troops living in squalid trenches for months, drowning in mud and gnawed by lice. Artillery bombardments made telephone lines difficult to maintain. Second Lieutenant Tolkien, as Battalion Signaling Officer, had to resort to handing written messages to runners who’d sprint them into enemy fire. “Junior officers were being killed off, a dozen a minute,” Tolkien later wrote. There were 350,000 British casualties by the battle’s end. Only one of Tolkien’s close friends survived the war. The Somme was a watershed moment in British history, the first time the nation tasted industrial warfare. Historians still cite it as the day Victorian optimism died.

And as Tolkien recuperated from his ordeal, he wrote about a fantasy realm in what he called The Book of Lost Tales. We know it today as The Silmarillion.

It is perhaps not surprising, then, that World War I left an impression on the young scholar and his invented world. While scholars can dispute individual elements — whether Sam Gamgee was inspired by Tolkien’s military aides, for instance, or that Frodo shows PTSD symptoms — the larger impact is thematic. The war made Tolkien deeply suspicious of violence, industrialization and the pursuit of power. The Lord of the Rings was a reaction to the slaughter he witnessed and the cynicism it imparted in a generation. Tolkien’s heroes overcome not through new technology or savvy politics, but through their innate goodness. They fight monsters when necessary, but very few are professional soldiers, and there’s always the refusal to use evil against evil. Tolkien’s novels reject politics in favor of idealism. In fact, during his life Tolkien scorned the political allegories placed on his novels, stating that The One Ring was by no means the atomic bomb, that Sauron wasn’t Stalin, and that Orcs were neither Nazis nor inherently evil. (He did, however, admit basing The Dead Marshes on the blasted mud of the Somme.) Tolkien wanted his books to be broadly applicable rather than representative. That’s why they stay, for the most part, apolitical and broad.

Which brings us to Middle-earth: The Shadow of Mordor, which is a War on Terror story if ever I’ve seen one. Breaking with Tolkien’s novels, Shadow of Mordor injects current politics into Tolkien’s largely apolitical world, filling it with the tactics, methodology and theory of counterterrorism.

Consider our protagonist, Talion. As a ranger, Talion is both a career soldier and a special operator, trained to practice guerilla warfare deep in enemy territory. Driven by a need for revenge after his family dies in an unprovoked attack, Talion — much like the early U.S. push to invade Afghanistan — cloaks his need to punish his enemies inside otherwise clear-headed political and military objectives. And ultimately, Shadow of Mordor tells the story of him conducting a black operations campaign against Sauron, using techniques recognizable to anyone familiar with the War on Terror. 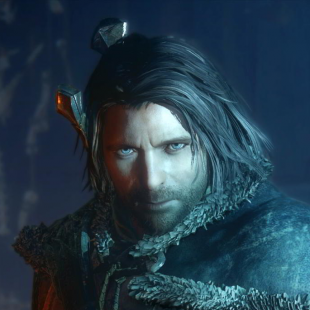 Take the game’s Nemesis System. By far the most interesting element, the Nemesis System mirrors the U.S. strategy in Afghanistan and other global battlefields: to degrade and destabilize Sauron’s capabilities through targeting leaders, causing chaos and wrecking morale. More than merely assassinating captains, Talion also influences power struggles, denies recruitment and destroys training camps. In other words, he’s striking at Sauron’s organizational structure in order to weaken it before it leaves Mordor — to fight them over there before we have to fight them over here. This isn’t how you attack an enemy army, it’s how you root out terrorist networks. The game also depicts the irony of this counterterrorism strategy, which is that every time you kill an orc captain, someone (often worse) takes his place. This isn’t merely a gameplay system either, it’s the plot of the game. The entire point is that Talion conducts black ops in enemy territory to degrade, disrupt and destroy Sauron’s fighting capability through assassination and sabotage.

But in order to target these warchiefs and captains efficiently, Talion engages in another counterterrorism activity: intelligence gathering. The game frames this activity in explicitly modern terms, even using the abbreviation “intel” despite the fact that the word feels anachronistic in Tolkien’s setting. While Talion steals enemy battle plans and letters, he also conducts raids to capture and interrogate high value prisoners in order to learn more about Sauron’s network. Visual, auditory and dialogue cues suggest that these interrogations cause pain, with orcs thrashing and the Celebrimbor screaming, Suffer me now! as he forces his way into the target’s mind. It’s without doubt a torture parallel, and the fact that it’s successful consists of a political statement in itself. Moreover, later in the game Talion can also dominate captains and send them on missions, helping them climb the ranks in Sauron’s organization in order to create exploitable opportunities. Both of these tactics reflect a counter-terrorism sensibility — the idea that in order to destroy a hostile organization you must identify the key players through inside knowledge and undermine them by placing agents in their midst. More than mere military strategy, this is intelligence gathering in support of direct action operations.

Shadow of Mordor also plays heavily on a psychological warfare strategy that U.S. intelligence services employ in the War on Terror — sowing fear in the enemy. But while Talion does this with wraith abilities, the CIA favors drone strikes.

Targeting suspected militants Afghanistan, Somalia, Yemen and Pakistani tribal regions, drone strikes are potent psychological tools. Able to move into an area silently and strike without warning, drones keep militants — and unfortunately, many innocent civilians – looking over their shoulder for the next attack. The concept is to cast the drone as an avenging specter, a presence that people know may be watching them from the skies, ready to strike. The hope is that this fear doesn’t incentivize militancy, though there’s some evidence that drone strikes actually increase recruiting due to their propaganda value. Shadow of Mordor, explicitly encourages you to instill fear in the Uruks, whether it’s attacking a captain with specific elements like fire or caragors, or using abilities like Drain and Brutalize that make enemies flee. Indeed, it’s telling that the prompt to release Morgai Fly nests isn’t drop or release flies but rather terrorize. Much like intel, that’s a fairly politically-charged term these days, and not one used by accident. The truth is that throughout the game, both cutscenes and mechanics instruct the player to make enemies fear them through moving above their gatherings unseen and destroying them in targeted strikes — at times even with explosions triggered by wraith arrows. While this element by itself doesn’t necessarily parallel the War on Terror (after all, military commanders have used terror tactics for millennia) in the game’s larger context it fits with current intelligence doctrine that attempts to influence the enemy through fear. It’s un-Tolkien, but very Leon Panetta. 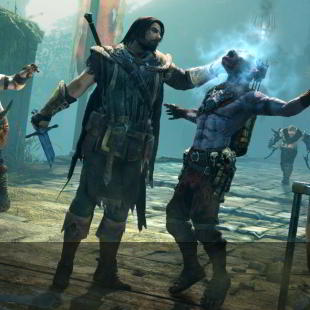 Finally, we come to the element that most blatantly clashes with Tolkien’s vision: the idea that you should ally with enemies for the greater good.

While there are times in The Lord of the Rings where the heroes ally with “fallen” creatures like Gollum or the Dead Men of Dunharrow, the context for this differs from that in Shadow of Mordor. In Tolkien’s works the heroes partner with possibly malevolent forces with the hope of redeeming them. Frodo feels pity for Gollum and a certain kinship since they’ve both carried the Ring’s burden — his hope to save Gollum mirrors the hope that he himself can be saved. Aragorn summons the dead to his aid with the promise that if they join him, their betrayal of Isildur will no longer curse them to remain in the world. True there are tangible benefits for the protagonists, but the offer also shows respect to the fallen by recognizing that they have the capacity for good. The alliances in Shadow of Mordor, by contrast, are realpolitik. They’re practical and goal-oriented with no backing philosophy. Talion dominates and turns Uruk captains and warchiefs because he needs them as leverage. He recruits Ratbag as a local ally not to give him a second chance, but because he’s weak-willed, incompetent and easily manipulated. In this, he’s like so many exiles and minor warlords the U.S. sponsored during its days in Afghanistan, doling out power and influence while communicating that the warlord would collapse without coalition support. There are also the more powerful and dubious allies like Queen Marwen and Celebrimbor, who may — like Afghan president Hamid Karzai and Iraqi PM Nouri Al-Maliki — advance their own agendas at their allies’ expense. Partnering with entities that may be malicious is an ethical Rubicon Tolkien heroes don’t cross, but Talion, written by those who’ve experienced decades of American interventions, looks on as practical and realistic.

I’m not suggesting, of course, that Shadow of Mordor is an allegory for the last decade-plus of anti-terror operations. That would be facile and incorrect. Rather, I believe the current War on Terror has changed how we think about war and therefore how we conceptualize dismantling an enemy force. In Tolkien’s books it happens through medieval means like building coalitions with feudal lords and rallying men-at-arms. Shadow of Mordor instead presents a counter-terror operation where the player conducts intelligence-gathering, assassinations, organizational disruption, recruits local leaders, fosters revolt and strikes training camps and other gatherings. It’s interesting, but it’s tonally jarring.

There’s nothing wrong with reinterpreting older stories through a modern lens. Indeed, it’s unavoidable. The storyteller’s own experience will inevitably alter their perception and cause them to choose themes in the work that conform to their understanding. It’s no accident that after 9/11 historians started asking whether American Civil War figure John Brown was a terrorist, for instance, or that the Civil Rights movement spurred renewed focus on race in classic literature. History leaves fingerprints on our minds. It changes how we see the world. These reinterpretations can even help keep a work alive, making it resonate with an audience that might otherwise find it outdated.

However, there’s a difference between emphasizing one theme in a work and adding elements that aren’t there. Shadow of Mordor does the latter. Bringing the modern understanding of war to Middle-earth contradicts Tolkien’s most prominent themes: his suspicion of violence and power, hate for modern cynicism and belief that good should never engage with evil. Tolkien’s heroes didn’t thirst for revenge. They didn’t use terror tactics against their enemies. They never dabbled in shades of grey or tried to use the enemies’ weapons against them.

Monolith crafted a fascinating mechanics system for Shadow of Mordor — now it has to find a world that fits it.