So Neverdead was nevergood. In fact it was pretty much all bad. Bad, bad, bad. Its favorite TV show is Breaking Bad. Its favorite Creedence song is Bad Moon Rising. And I’m sure I don’t even need to tell you what its favorite Michael Jackson album is. It’s Invincible. Because, like Neverdead, Invincible is pretty bad.

But the reason why it fires my interest is that Neverdead is the good kind of bad. Not the bad kind of bad that’s tired, mediocre and dull (for as we should all know by now, being boring is the absolute worst possible criticism a piece of supposed entertainment can receive). It’s the kind of bad that attempts to implement a few bold new ideas but can’t quite get a handle on them and crashes humiliatingly into the mud. In doing that it now earns a place alongside such games as Alone In The Dark and Dark Void.

Neverdead is like a shark swimming circles around a halfway good idea, occasionally drawing close enough to nudge at the shins and maybe have a little nibble but never managing to sink its teeth in properly. It wouldn’t even have taken much to make it good. Okay, it would have taken a fair bit, but the right attitude’s in place already. Let me defy once again the accusation of never being constructive in criticism and think of how things could be saved.

1. Understand the relationship between camera placement and gameplay style.

Here is a short list of games generally considered good, or at least competently put together. Resident Evil 4. Gears of War. Half-Life 2. These games are shooters, based around picking off the enemy from mid-to-long range, and so the camera remains close to the player character, if not right inside their bonce, so that both the camera and the character can easily see down the gunsights.

Here is another short list of games generally considered good. Devil May Cry. Ninja Gaiden. God of War. These games are hacky-slashers, and generally the camera keeps its distance, hovering above the player character. Enemies are more likely to come into extreme close range and often swarm in from every angle, so the camera placement emphasises giving the player a complete awareness of the nearby environment. It would be frustrating otherwise.

You can sort of see where I’m getting at here, but if you insist on having both short and long range combat, you have to understand how the camera’s position affects the two different gameplay styles. If Neverdead could only have had one camera position it should have gone for the higher-up hacky-slash kind, because I hardly see how it can be my fault that my head’s been bitten off by a demon dog who was telegraphing his attack from a blind spot two feet behind me.

2. Play up the limb loss thing.

I like the detachable limbs idea, I really do. But in Neverdead, every time a limb or my head got separated in combat, I would react with frustration and a resigned sense of despair that I would now have to dawdle around pulling myself together for a few seconds, and it completely breaks the flow. Adding a greater sense of effectiveness to the dismembered state would help avoid interrupting the fight, and would expand the tactics available in combat. 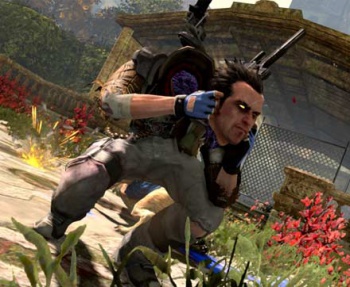 I already mentioned in the video that you can still fire your guns when your arms are torn off, but since they can’t be aimed this is virtually worthless. Let’s make one tiny simple change to that: guns in disembodied arms automatically aim for the nearest enemy. And bam, we have an instant remote turret system.

Additionally, instead of only being able to roll awkwardly around the uneven terrain when reduced to a head, how about letting us bounce up and down to a maximum height of six feet? This grants greater mobility and awareness of surroundings. Then, give us a sort of meteor strike power like what the Lost Souls in Doom have, and when you hit an enemy, you can bite down on their ear and steer them around for a bit like the Jockey from Left 4 Dead 2. You could try and steer them into the range of one of your arm turrets, all tactical, like. Then you just add some timer system to discourage going around headless permanently and suddenly combat isn’t such a bloody arduous chore, is it?

However, there’s only so much that can be done, so while we’re on this subject:

3. Generally play down the combat.

Sometimes I worry that modern gaming is gradually shrinking the wide spectrum of gameplay mechanics into a single narrow red bar with “KILL” written on it sideways. Exploration, navigation, puzzles, platforming, all gradually shrinking away until only one thing remains, being taken by the hand from room to room, moving on only when nothing remains alive in each one. In mainstream games, anyway. Dull, samey cleanup sequences over and over again, connected by corridors and cutscenes if you’re lucky.

Neverdead features as a mechanic the ability to rip off your own head and throw it into unreachable areas, regenerating the entire body from the head when it finds enough room. The game dallies only slightly with it in between all the combat, but this seems like core mechanic material to me, and a unique one at that. One that seems far better suited to a more sort of platforming / exploration kind of set up like Metroid Prime (another game in which you spend a lot of time rolling about in a considerably smaller form). You could have puzzles about tearing your head off and throwing it into a room in such a way that your old body weighs down a switch to keep a door open. You could even remove combat entirely in favor of enemy evasion. There can be few more effective ways to escape monsters than throwing your head over the nearest wall.

There would need to be better controls for aiming where your head goes, of course. Actually, thinking about it, the whole concept works a hell of a lot better as a 2D platformer. That way you wouldn’t even need to auto-aim the disembodied arm turrets, they just shoot everything to the left or to the right. But I suppose 2D platformers aren’t exactly showing off the technology, are they. You’re not allowed to have mainstream games these days that look like they belong in the 16 bit era. Unless you’re Nintendo.