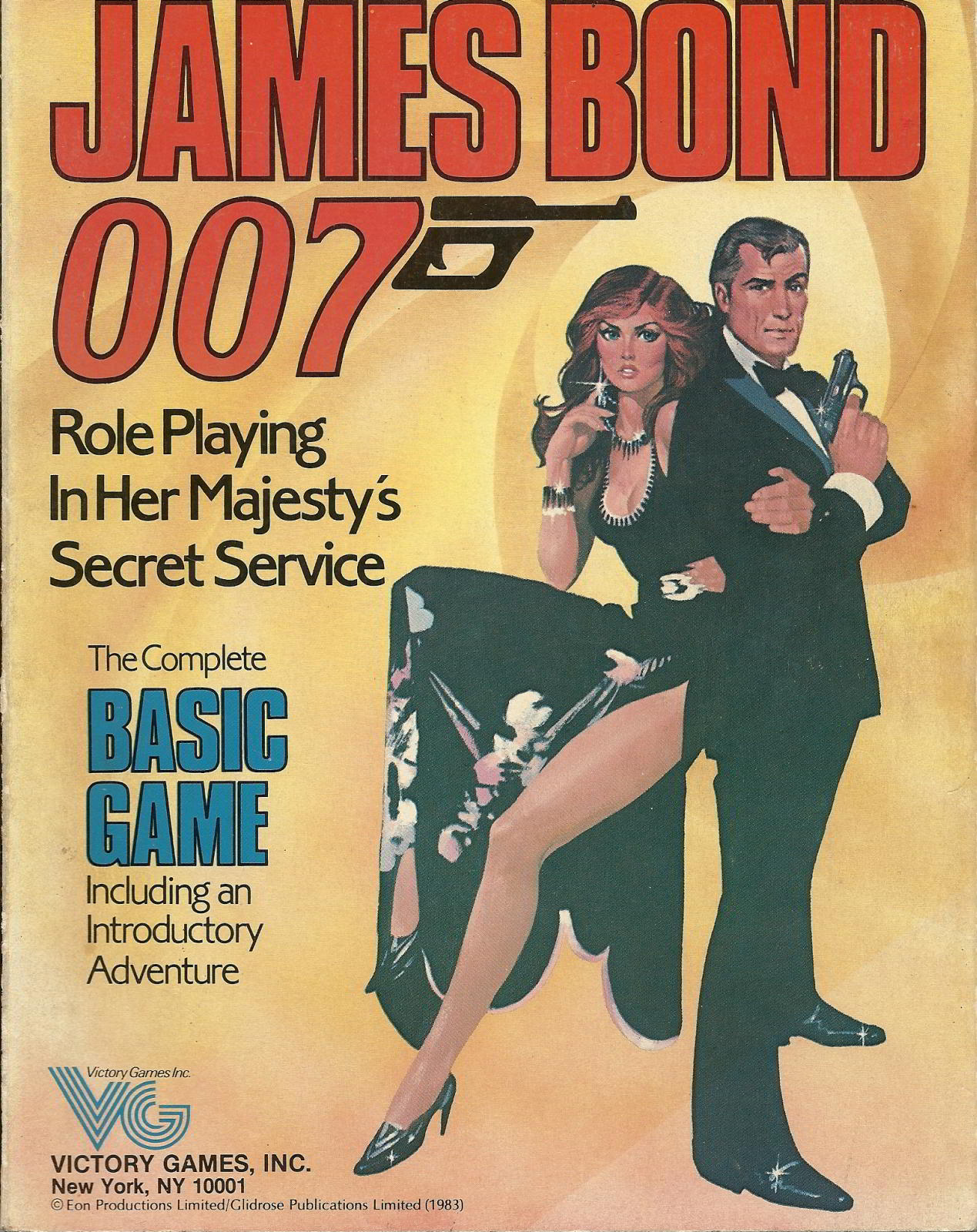 There are very few things I miss about the 1980s, but Victory Games’ James Bond 007 RPG is definitely one of them.

Let’s put this in perspective: if you were a pre-teen in 1983, when this RPG first came out, then you might have seen Roger Moore’s eyebrow-twitching superspy in the cinema, but Sean Connery’s Bond is locked away in the vaults of history, and nobody’s prepared to admit they know who Lazenby is. VCRs are for rich people, and YouTube isn’t even a glimmer in a designer’s eye, so if you don’t catch it on television – picture formatted to fit your screen and chunks of it cut to avoid naughtiness – it might as well not exist at all. Your entire concept of Bond is Moore, with his outrageous gadgets, car chases, shootouts in funfair houses, and the girl, not necessarily in that order.

If you’re a kid, and you see this impossibly cool fantasy unfolding in front of your eyes, you want to be Bond. Victory Games let you do just exactly that.

Victory Games, an Avalon Hill subsidiary, didn’t set out to do Bond; it was a strategy game maker that wanted to be in the RPG industry which, with TSR’s release of Dungeons and Dragons in the late 1970s, had just recently been born. Many other companies followed in TSR’s wake, and Victory felt it had to base its first release on a licensed property in order to compete.

Victory approached several copyright holders, hoping for a reliable partner. The people who owned Bond were the most receptive to Victory’s advances, but the relationship was never easy, in part because there was more than one Bond. One entity, Danjaq, owned the film Bond, while another, Glidrose Publishing, owned the literary rights. Victory hoped that its game would appeal to people who liked both the films and the books, but that meant getting approvals from both Danjaq and Glidrose, which was a long and sometimes excruciating process.

“We knew they were going to be a demanding group,” says Bob Kern, the designer Victory brought on board to make Bond feel like Bond. “They looked at everything we wrote, they looked at our outlines, they checked and double-checked everything. But for the most part, their suggestions were very helpful.” 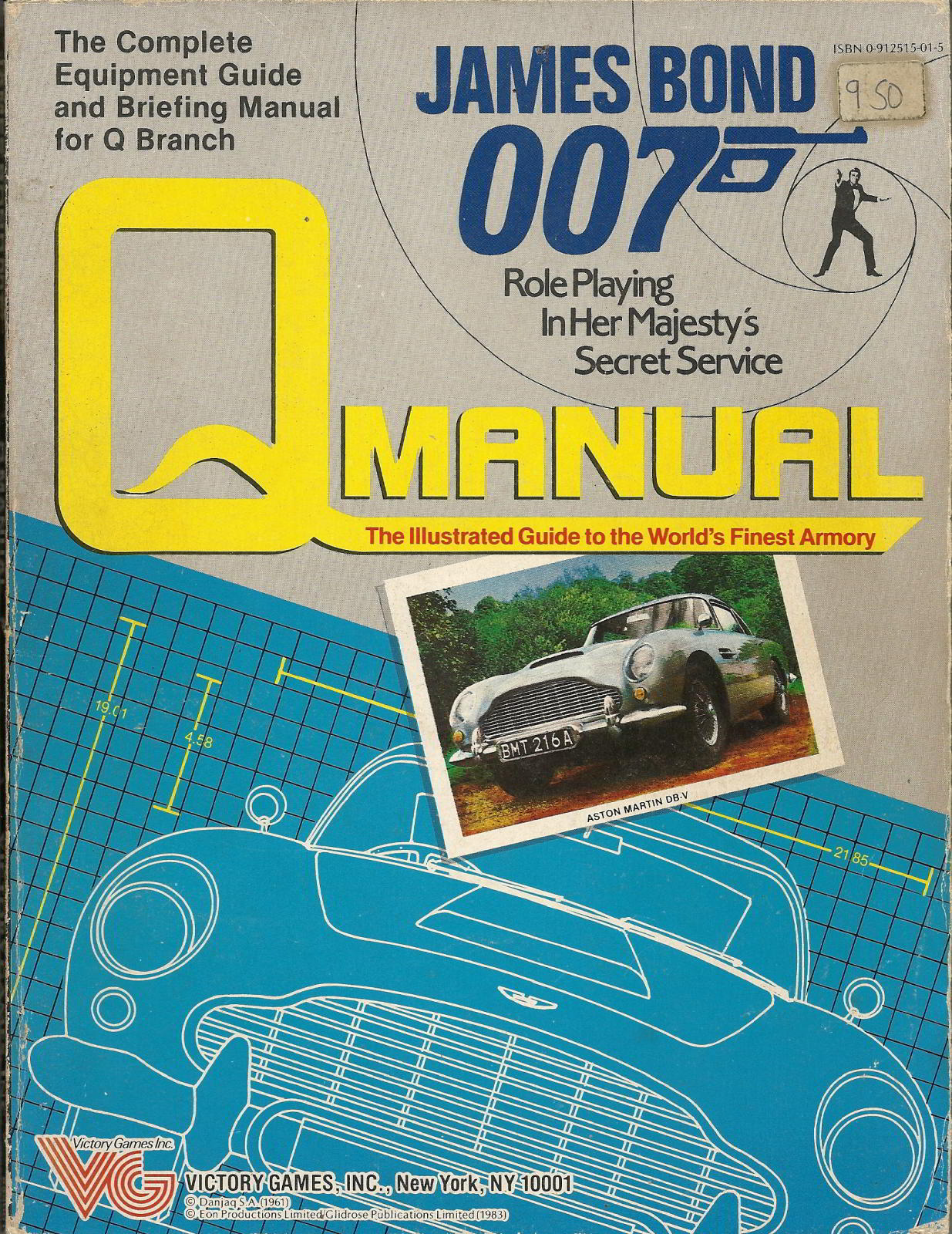 When their suggestions weren’t helpful, from a design perspective, it was because the film and book people didn’t understand gamers. They expected a property based on, say, Goldfinger, to be exactly like Goldfinger, not realizing that your average player, knowing the plot backwards and forwards, is likely to head straight to Fort Knox and ambush gold-loving Auric before he has a chance to really get his plan going. The Victory Games people knew better, and insisted on making plot changes to suit the needs of their narrative.

That was the essence of James Bond 007‘s appeal; it was just enough like the books and the movies to spark imaginations, but it wasn’t chained to them. It didn’t even have a photo of Moore or Connery on the cover, but an illustrated Bond that looked like a melding of the two actors. If you, as Gamesmaster, wanted Dr No to switch from nuclear experimentation to supercomputer development, you could. Maybe Kananga’s a drug smuggler, like in the movie, or maybe he’s selling pirate gold, like in the book, or maybe he’s doing something else altogether. It’s your game, the developers were implicitly saying. Play it as you like.

It even captured the little things about being Bond. Sure, a superspy can shoot straight, that goes without saying; but he also knows his Mouton Rothschild from his Oyster Bay, so everyone gets free points in the Connoisseur skill. Want to pull off something impossibly cool? Then spend a Hero Point, if you have one free, and away you go. The villains have something similar, Survival Points, but those are only used to keep them alive, Jaws-style. Do you think that Beautiful Foil might be amenable to company, thus resulting in what the rulebook calls ‘a more beneficial working relationship?’ Then let’s hope your Seduction skill is up to snuff.

Mechanically it’s all pretty simple. Based on a percentile system, each task is assigned an Ease Factor by the Gamesmaster, and that factor is compared to your characters’ rating – skill level plus physical attributes – to work out the percentage chance of success. Yes, you can fumble. At least if you fumble Seduction the worst that can happen is that you’re wearing your dinner; Heaven help you if you fumble at high speed while pushing the Aston Martin past all the manufacturer’s recommended limits. 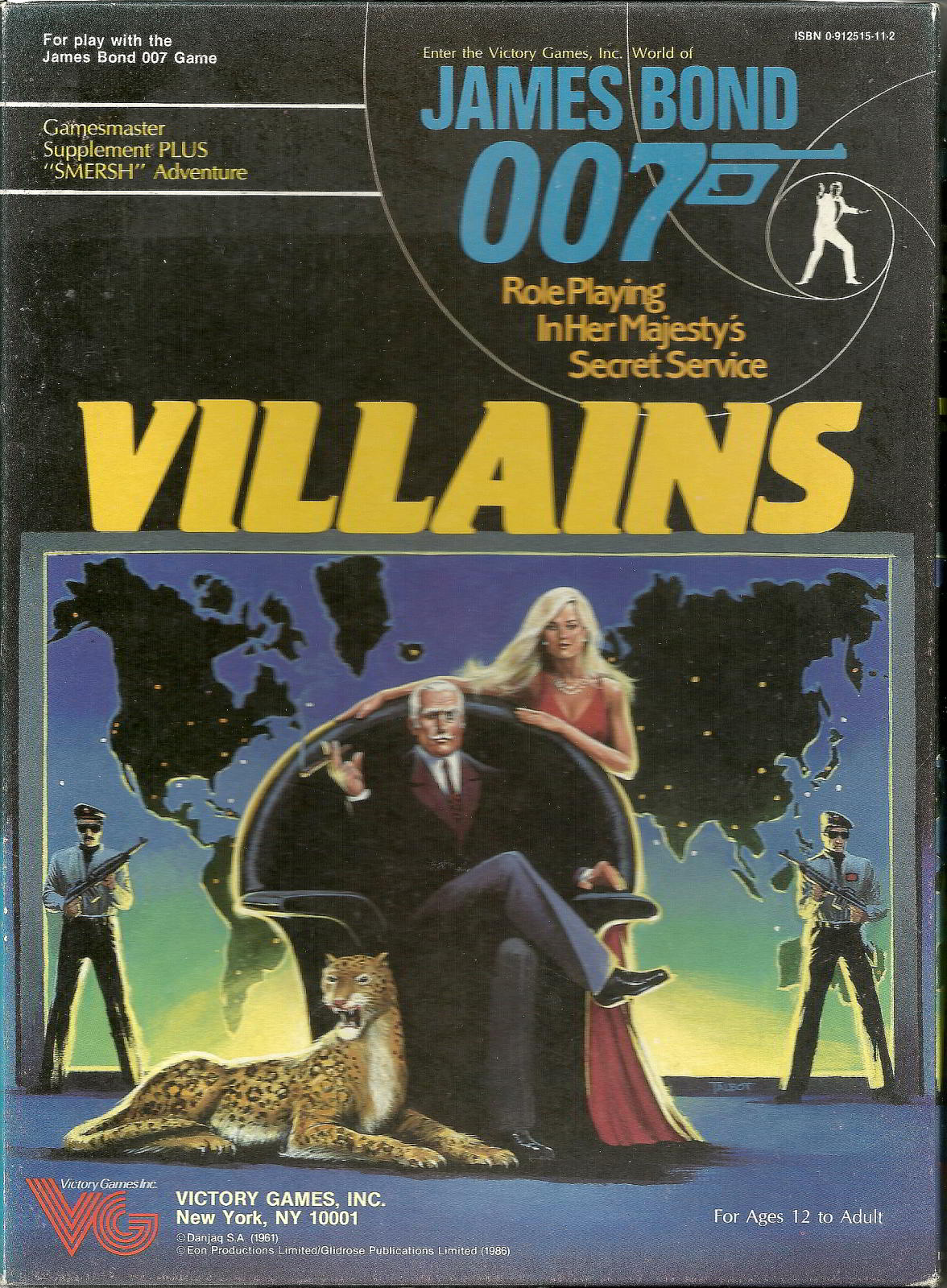 The major switch-up is the complete absence of SPECTRE. Rights to that entity belonged neither to Danjaq nor Glidrose, so Victory invented an entirely new organization: TAROT, or Technological Accession, Revenge and Organized Terrorism. Headed by Karl Ferenc Skorpios, this organization uses blackmail, terror attacks, assassination, robbery and extortion to build a shadow empire, with former carny and knife-thrower Skorpios at its head.

James Bond 007 took the gaming world by storm, with sales easily outpacing TSR’s own Top Secret, at that time the preeminent spy game. Sourcebooks and adventures followed rapidly, even sequels. Dive into You Only Live Twice, then tackle You Only Live Twice II: Back of Beyond. Need new adversaries? Take a look at Villains and face off against techno-wizard Cartesia, psychopathic Bond-a-like Parkhurst, money man Buonvisi, or the rejuvenated Soviet spy-hunting organization SMERSH. Want the latest gadgets? Pick up the Q Manual, complete with a list of every toy, car or weapon Bond ever used, up to 1983.

Up to 1983. There’s a problem with nostalgia; you forget the rough edges and only remember the good bits. I’m as big a fan of Connery and Moore as anyone – I even like Lazenby – but there’s been three more Bonds since then, and the older stuff starts showing its age after a while. Having GPS in your car was technological wizardry in 1964, when Goldfinger came out; now the toys in the Q Manual seem almost quaint. I don’t think I could bring myself to play this game again. It looks great, and I remember the good times, but I’m not someone who idolizes his childhood. It was fun, and now it’s done. There are other good things in store.

It doesn’t help that the game died before its time. Most RPG titles, when they finally perish, it’s because there’s no market for their product and they can’t afford to keep a struggling game alive. These days that tends to mean even a cash-strapped indie with a following of a few hundred devoted souls can last forever, but this was Bond. Everybody loved Victory Games’ superspy title. It was pretty much the only spy game anyone played, in the 1980s. Then, in 1987, it was gone. 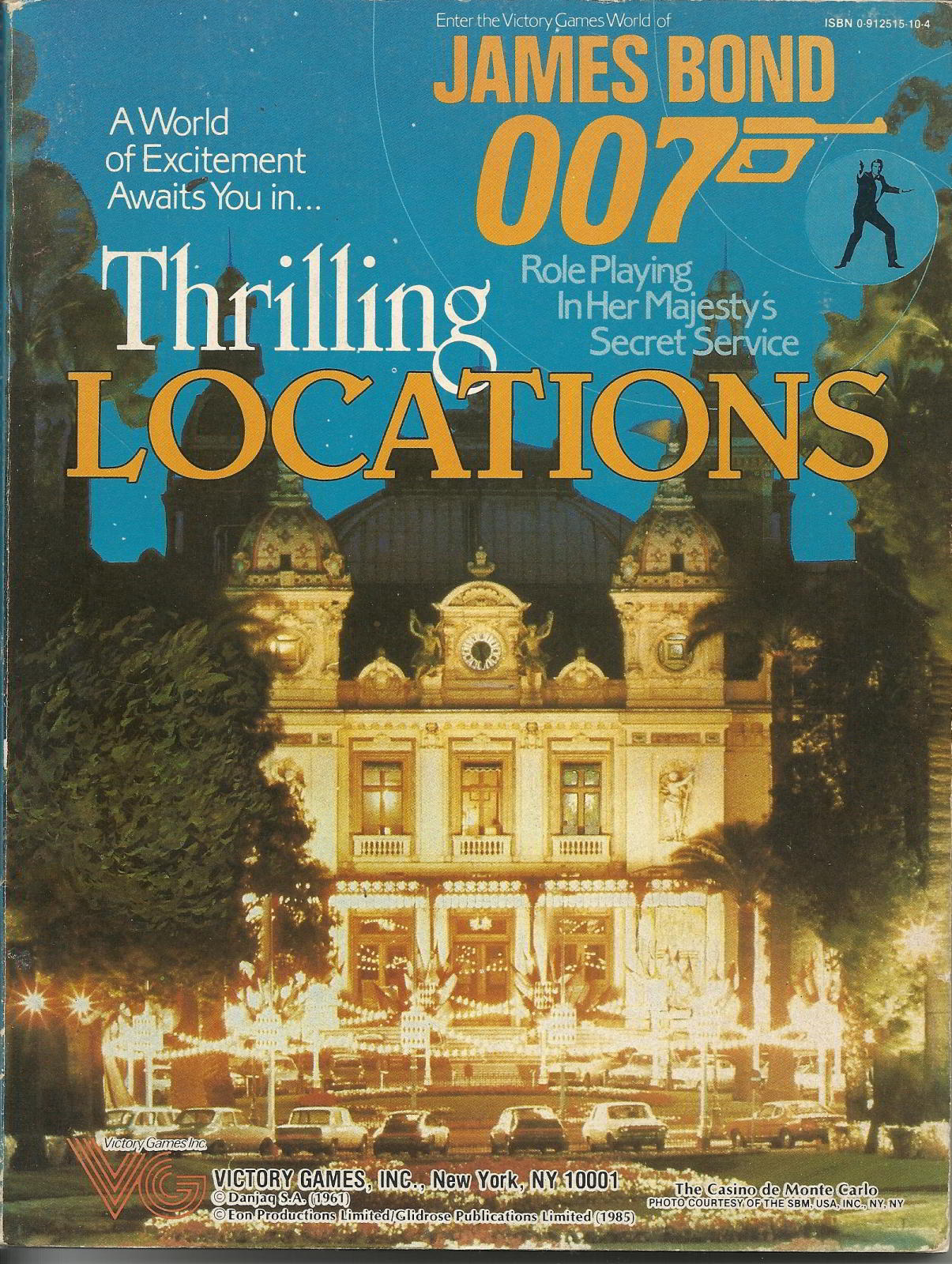 Nobody really seems to know why, or at least, if they do, they’re not prepared to admit it. Avalon Hill claims that the film Bond people, Danjaq, wanted a larger share of the royalties money, and it couldn’t afford to keep the license under those terms. For its part, Danjaq says Avalon Hill was the one to pull the plug. Danjaq thought everything was going great. The folks at Victory were working on the latest scenario, Diamonds are Forever, when the rights lapsed. Any remaining inventory could be sold, but that was it for the James Bond 007 RPG.

It was also pretty much the end of Victory Games. The studio had other titles – mostly hardcore strategy, though its lineup does include a Nightmare on Elm Street boardgame – but nothing that had James Bond’s appeal, or market share. When people started leaving Victory, no effort was made to replace them, and Avalon’s subsidiary disbanded in 1989, two years after losing the Bond rights.

Should you seek this out? If you’re a sucker for nostalgia or a hardcore Bond buff, sure. Mechanically the game holds up well, and can be understood quickly even by novice gamers, making it a good fit for most groups. It’s not that difficult to find on the second hand market, though if you want a complete collection it may take a while. If all you want is a knockabout spy game, the Basic rulebook is really all you need. Were I to pick two other supplements worth purchasing, I’d go for the Q Manual and Thrilling Locations, but again, these aren’t must-haves.

You can’t have my books. I may not be a nostalgia guy, but I’m not crazy. Those are staying on my shelf. They still have a use. I’ll pull them down every once in a while, read them to remind me of the days when I was a kid.

Dreaming of being Bond.