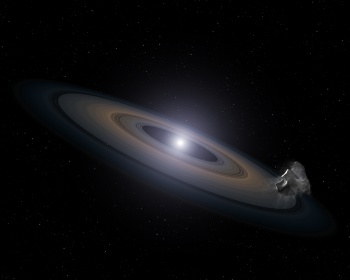 The discovery sheds the light of dim, white fusion on what Earth will be like in 5 billion years.

Scientists searching with the Hubble Space Telescope have found the pieces of Earth sized planets in a fairly surprising place: orbiting dead stars. A pair of white dwarf stars in the cluster Hyades, about 150 light-years from Earth, is being polluted by asteroid-like debris falling into them. “When these stars were born, they built planets,” said Jay Farihi of the University of Cambridge, “and there’s a good chance they currently retain some of them. The material we are seeing is evidence of this. The debris is at least as rocky as the most primitive terrestrial bodies in our solar system.” Hubble’s spectrograph indicates that the rocky debris around the white dwarfs is high in silicon and low in carbon, which matches the general composition of rocky material in our solar system and the general composition of Earth itself. It’s what Farihi calls chemical evidence for the building blocks of planets composed a lot like Earth. It could indicate that rocky planets are the trend around the cosmos.

White Dwarfs are the very dense, burnt out remains of dead stars. They are very dense and have powerful gravity, which Farihi thinks is responsible for the destruction of the various primitive planetoids remaining in their systems. Those shattered bits of rock are falling into a ring around the dwarfs, and then being pulled into the atmosphere of the dwarf itself. “It’s difficult to imagine another mechanism than gravity that causes material to get close enough to rain down onto the star,” said Farihi, noting that “Normally white dwarfs are like blank pieces of paper, containing only the light elements hydrogen and helium.”

It’s likely that a similar fate could befall our solar system when the sun burns out, disrupting the balance of gravity between the sun and Jupiter. Rocky asteroids and planets approaching the dying sun will break up, being pulled into a similar ring and then raining down onto the dead star. Farihi’s team intends to continue studying Hubble data about white dwarfs, and in the future they hope that they will be able to not only see more about the rocks’ composition, but also about the composition of their parent bodies.

If you like to keep up with the latest science news, you’ll probably enjoy the Geekend Update, our weekly science show. New episodes drop each Saturday.

The Forest: Open-World Survival Horror In a Lush Paradise