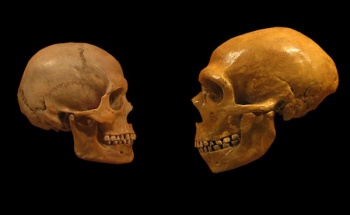 Modern anthropologists were already getting used to the idea that human evolution was influenced by Neanderthal interbreeding. But new research suggests this interbreeding was happening a lot earlier than anyone expected. A close look at the DNA of a Serbian Neanderthal has revealed traces of human-Neanderthal breeding from 100,000 years ago – 50,000 years longer than previous estimates.

“I think our idea of these being really separate and highly distinct groups that had relatively little interaction, that is starting to change,” Adam Siepel of the Cold Spring Harbor Laboratory explained.

Science has already studied human DNA and find traces of Neanderthal genomes. What makes this sample different is that it was pulled from the well-preserved toe of the Altai Neanderthal. This implies that both Neanderthal and human offspring were influenced by each groups genetic makeup, and a lot earlier than scientists initially thought. “It was perplexing to see gene flow in the opposite direction,” Siepel said.

The other implication is that some modern humans were migrating from Africa almost immediately after Homo sapiens first evolved. Exact details of human migration from this period are sketchy, limited to a handful of bones in scattered sites. Whatever the case, we can now assume the migrants lived alongside – and hooked up with – local Neanderthals along the way.

“It seems clear that there was a fair amount of interbreeding,” Siepel continued. “We now know of at least four events between different groups of archaic hominins, and we’re probably going to keep discovering more.”