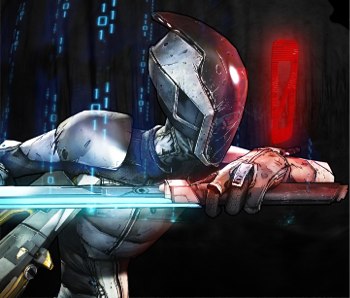 It’s there, casually idling in my subconscious from nearly the first waking moments of each day. And not only that, I can’t stop talking about it either. It bubbles up during a startling quantity of my day’s conversations in a seemingly natural fashion, my own personal variety of word vomit. I try to ignore it. I try to remind myself that, in the videogame industry, relevancy can sometimes be gained and lost in the time it takes to cook a Hot Pocket, and honestly I don’t care. Having helped me to turn a lifetime of FPS loathing into a newfound love, I think Borderlands 2 is one of the best games ever published and I want everyone I know to have a chance to take part in it while it’s still unfolding.

From the first few wub wubs of the game’s trailer I was hooked. You see Borderlands has always had a flare for sound, featuring Cage the Elephant’s “Ain’t No Rest for the Wicked” in the series’ original title and launching both band and game into much of the fame they enjoy today. I used to just let the introductory cinematic play on repeat, unashamedly dancing around my house to the theme, an issue that has since I assure you only gotten worse. The sequel’s song, “Short Change Hero,” is once again soulful in the way you’d really want a game about being a murdering outlaw in the wild galactic frontier to be. The character montage that accompanies it is at times chillingly poignant, and there’s real depth implied despite the game’s clear commitment to sillyness: The borderlands “ain’t no place for a hero”. What it really needs is a badass.

As a lifelong MMO enthusiast – and if we’re being really honest here I’ll venture the term addict – I like a game that measures and rewards progress. One of Borderlands‘ most popular features is its capacity to generate and distribute guns of seemingly infinite variety. All the items you receive, including quest rewards, are assembled in individual parts. As with real guns, each one has a barrel, a sight, a grip, and so on, and each of those parts is made by one of the game’s 8 weapon manufacturers. The manufacturers each have different strengths, like damage or stability, and each gun is a random assembly of rolls of these parts. Even if I end up running through a game with my friend while playing the exact same class and build, we’ll still end up with a unique collection of items, and therefore a unique pair of characters. With each level guns get bigger, shinier and indubitably more beastly, making me practically salivate at the notion of finding an upgrade. For a gear junkie in recovery like me this is basically riding the dragon, but with no subscription fees.

All of this alone would likely have been enough to break me, but wait… there’s more! Not only does the game have both co-op and multiplayer functionality that can be mixed and matched, it also has raid bosses. Just like in an MMO, there are actually things you cannot accomplish alone, or to be more accurate, without cheating. If you don’t have enough time to learn that weird exploitative build that’ll have you one-shotting bosses, to get the best gear you’re going to need to either play with your friends or with some strangers, both of which are ridiculously easy to do with the added functionality of cloud saves. Just last night I was lamenting how difficult the last few levels had become, and how much easier it’d be if some friends were on to help me out. Due to respawn fees my savings had dwindled from 40 million dollars to a mere 600 thousand in what felt like the span of a heartbeat. I opened my game up to public access and within a minute I had 3 equally leveled and comparably geared players running along with me in my mission. They even let me have the rare drops – the truest form of geek chivalry.

And the game is just plain fun to play. I feel like it’s important to say that I’ve actively avoided playing first person shooter games for as long as I can remember. As an Iranian-American gamer that grew up in the south, Counter-Strike had left a bad taste in my mouth early on. Not only that, but I always thought the pressure of aiming and pulling the trigger was terrifying. For some incredibly strange reason, in Borderlands 2 the first character I leveled up was an assassin. You see, Zer0 the Assassin has a special ability called Deception. In deception mode Zer0 can disappear for a short period of time and a target becomes visible on each opponent, outlining their most vulnerable spot. This brief window helped me to relax, knowing that I could set up my shot and breathe before it came time to strike the killing blow. In this way I slowly trained up my shooting ability, becoming gradually comfortable with the nature of the gameplay. Nowadays when I bring the rifle out I feel like an angel of death, leveling entire groups before even emptying my clip.

Not only did Borderlands 2 get me to embrace a genre I’d previously reviled, it’s shown me something I like about the DLC model. While I know to some a statement like that is an admission of treason and heresy of the worst kind, I must admit that being able to look forward to new expansions feels familiar in the best way. In my EverQuest days, the releases of Kunark and Velios were some of the most exciting memories I acquired, and in that same way I eagerly look forward to each twist and turn in the ongoing narrative of my current game. There’s something to saving a bit of the end of really good things to enjoy later on, like with a particularly tasty chocolate bar. It’s the rush of knowing there’s still just a little left to discover. I sincerely hope you’ll take a moment before the end to suit up and explore it with me.