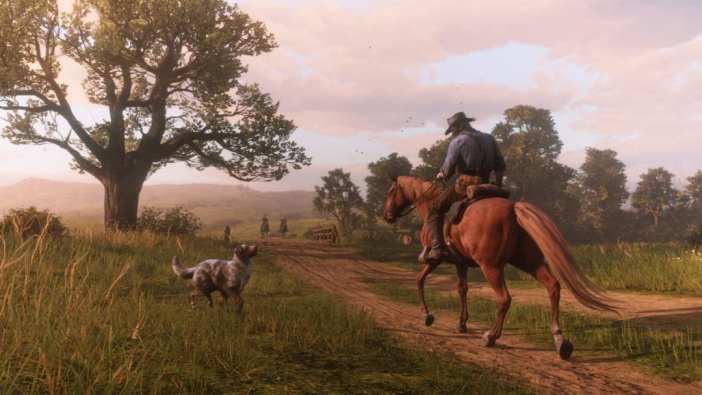 I hate everything that isn’t Red Dead Redemption 2.

This is not a review. I’ve played 30 hours of Red Dead Redemption 2, tested almost every system in the game, and uncovered only 27 percent of its story. I’m not yet ready to put a score on it, or declare how well it has or hasn’t accomplished its artistic ambitions. That time will come.

For now, I simply want to tell you about it. Writing about it is the only thing I hate slightly less than everything else that isn’t playing it.

My time with RDR2 surfaces to memory in a series of vignettes, much like life.

Riding over a hilltop, I spot two insignificant trees. Tiny things. Scrub bushes of some kind. Spindly, slightly green things, with willowy limbs. The kind of things artists love to create for games, but that don’t typically merit physics. I galloped my horse straight at these trees, looking to ride between them. No reason. I just felt like it.

The horse screamed, and I was propelled over its head, tumbling to the ground in a swirl of dust and pain-confirming controller vibrations. Oh. These scrub trees have mass. They have physics. They are of the world. As is … everything.

It’s impossible to describe the wonder of Red Dead Redemption 2 to someone who hasn’t played video games for the past few decades unless they are also entirely unfamiliar with video games. Those of us who have been playing games that long have spent years telling others that a game would someday come to make the worries and cares of daily life real life feel irrelevant compared to the joy of its digital approximation. And all that time, every single one of us has been wrong.

I was riding along a trail and I heard gunfire. The sound — a rapid crack, followed immediately by a boom of thunder — echoing off the hills. I turned my head back and forth; the shots sounded like they came from somewhere to my left. I rode on to investigate. Around a bend, I saw a farmer and his two sons defending their property against a band of, well, bandits.

I took a moment to decide whose side I was on. On the one hand, I was also a bandit. Or an outlaw. Or a reformed bandit? Maybe a good guy, if there is such a thing, in RDR2’s morally grey world. On the other hand, a smart bandit knows a farmer isn’t likely to have anything much to steal. That cinched it. The bandits likely had more loot.

I pulled my revolver and started shooting. The bandits turned their attention — and all those guns — towards me. I was getting hit more than I was hitting. (Aiming from the back of a moving horse, it turns out, is hard.) And so I used my other weapon: the horse. I spurred my mount to a full gallop and charged right at the biggest tough in the posse. He and my horse connected: hundreds of pounds of muscle and bone colliding with momentum. The bandit went flying. I rode past the other two, shooting as I went. Took one down, turned, came through for another pass and rode over the first guy, who was still on the ground from his encounter with my horse. He died crushed under its hooves. One bandit left. I took aim and killed him.

The farmer and his sons thanked me. I didn’t need or want their thanks. I looted the bodies and then I rode on.

I suffered through a miserable winter (and expository tutorial) in the mountains with Dutch’s gang. Then we all — this outlaw family — rode to a new territory to start over. As I learned more about each member’s reasons for being in the gang, I began to understand that where the line between good and bad is drawn depends on where you’re standing — and who’s drawing it.

If Red Dead Redemption was about one former outlaw turned avenging angel (turned maybe outlaw again?) the sequel is about a time, a people who lived in that time, the pressures forcing them to live one way or another, and making sense of why being bad is sometimes good. And vice versa.

The gang is on the run. Each member has a story, a past and a future. I helped some of them cope with their pasts, or shape their futures, and then my own past came back to haunt me causing me to question my own future.

Early in the game (spoiler), I found John Marston, hero of the first Red Dead Redemption. And very soon, it started to become clear how events might transpire to lead him to his grim, adventurous future, back in our past, in the original game. Will I play a part in that, or is his future set in digital stone? What about mine?

With more than 70 percent of the game’s story yet to be experienced, I honestly can’t say. But from what I’ve seen so far I expect the lines between good and bad, past and future, hero and villain, are going to be as malleable as footprints in the desert sand.

Eight years ago, when John Marston sought redemption in Red Dead Redemption, when I was editor-in-chief of Escapist Magazine Volume One, I wrote about that game that “you’ll want to tell people you own this game, as it is sure to become a classic.” History has proven me right about that (possibly obvious) prediction.

With that in mind, here’s my prediction for the sequel: you will want to tell people you own this game, share your experiences in this game with them, stream yourself playing it, and watch endless hours of other people doing the same. And, like me, you will come to hate everything that isn’t playing, sharing, streaming, or watching Red Dead Redemption 2.

We’ve been telling people for decades that a video game will come and make real life feel irrelevant. That it will be hyper-real, and allow you to do everything you can imagine within the confines of its world. Red Dead Redemption 2 has finally proved us right.