I took another look at Disney’s revisionist take on Maleficent.

So. MALEFICENT. is a pretty big hit. Huge, in fact, especially considering that it’s a really dark, extremely unusual revisionist fairytale and the “ceiling” Hollywood keeps telling me comes affixed to movies made for, about or primarily starring women. Especially women approaching middle age with a bunch of kids. Funny how that works out.

I found, and still find, the film to be a mixed bag; but my review came down mostly on the positive side overall: I still maintain that its a little draggy in the second act and that the central “redemption” arc isn’t quite as functional as it needs to be, but also that it opens and closes strong and Angelina’s star turn picks up the slack. And yet, since my original review was finished and sent off to my editors I’ve been plagued by a nagging sense that maybe I hadn’t given the film its due.

For starters, despite not particularly falling under its spell, I haven’t been able to get it out of my head since first seeing it. That’s not exactly surprising, since part of what stuck out about it from the beginning was how strange it was in execution: A Disney live-action pseudo-remake premised on the idea that the original classic had done violence to the “true” story as presented here? That posited a famous villainess was actually a wronged and righteous heroine? Tinged with broad-strokes references to sexual-assault survival, witch-persecution and matriarchal paganism vs male-centric European feudalism? Where did this come from?

But there are plenty of “bad” movies that can linger in the brain: Consider The Dark Knight Rises, a narrative disaster partially because its jam-packed with sloppy, hamfisted socio-political meandering; or more recently Man of Steel, which abandoned all sense of character and logic for an exhausting slugfest so tonally-inappropriate it triggered a media-wide debate on the proper care and tending of iconic modern myth. The bigger “yeah but” tugging on my ear over Maleficent was that I hadn’t A.) acknowledged sufficiently that I am probably not the film’s target audience, nor B.) made enough effort to consider what said audience might see that I didn’t.

To be clear: To the extent that film criticism is a “discipline” at all, that discipline is being able to report on a work apart from the majority of one’s own biases. Obviously, “pure” objectivity is impossible, but there are pretty clear degrees involved: I myself am fairly incapable of not enjoying a movie about robot dinosaurs just on principle, but when Transformers 4 comes out it’s my job to tell you whether the parts I won’t be watching on an endless Blu-ray loop are any good.

But a critic is human, and no one human can live a life that encompasses the entirety of the human experience. Well, maybe Werner Herzog has. And it’s inevitable that even the very best critic (read: not me) may simply “miss” something that connects on a powerful level with others in the audience. And since the soul of narrative art is its connection with those experiencing it, at the end of the day there will be films whose visceral impact on an audience is worth considering in at least equal weight to its quantifiable beat-by-beat smoothness.

A good example would be Friday lambasted by mainstream critics upon release in 1995 but today remembered as one of the classic comedies of the 90s. It’s easy to see where critics took issue: The structure is episodic, the characters thinly-sketched, Ice Cube is a limited actor and the overall effect more prolonged-sitcom than feature film. But the film connected with a large audience of (mostly) young black Americans by simple virtue of giving them something they seldom saw on screens: Themselves, and the day to day reality of inner-city American life presented with humor and even sentiment. Does that make Friday “good?” Well, I don’t know – but it makes enough people say that its good for the prospect to be worth considering.

In any case, I made it a point to see Maleficent again on its actual opening day, a mid-afternoon show to guarantee an audience of (mostly) moms and kids. I wanted to see it again, but I also wanted to see how it “played” to this sort of crowd – my impression from the original viewing was that the film was making a very specific play for the sensibilities of a contemporary female audience, and regardless of how successful I thought the result was I wanted to see what that audience thought of it. 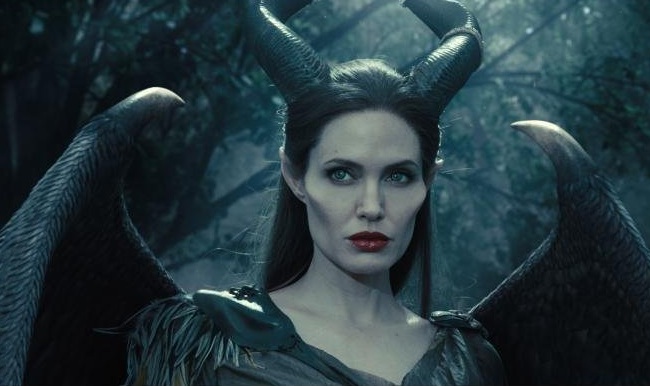 Specifically, I wanted to see how they reacted to the end of the first act “inciting incident,” by far the most talked-about and symbolically loaded part of the film: Maleficent (at this point an adult human-sized fairy) is contacted by Stefan, a human with whom she’d shared a quasi-romantic friendship in childhood. They reminisce and snuggle chastely under the stars… but it’s a trap: Stefan has slipped her a drug, and she awakens to discover that her “friend” has sawed off her wings as a trophy to the human’s greedy dying king – an act which will make him (Stefan) the successor to the throne.

Even beyond the description, the entire sequence is layered in lurid, unmistakable symbolic cues: the tiny vial of sedative (for real – he literally spikes her drink), Stefan’s impotent inability to “finish the job” with a dagger, Jolie’s confused/horrified realization and awkward attempts to walk immediately after and so forth. There’s just not much room to “miss” the metaphoric conflation of Maleficent’s betrayal with domestic/sexual-assault – right down to the perpetrator being a “nice guy” friend she thought she could trust.

I was among a number of (mostly) male critics for whom the immediate point of reference was the “wronged woman’s payback” genre of films, typified by exploitative fare like I Spit On Your Grave. It’s easy to see how we got there, even setting aside the obvious added attention being able to put 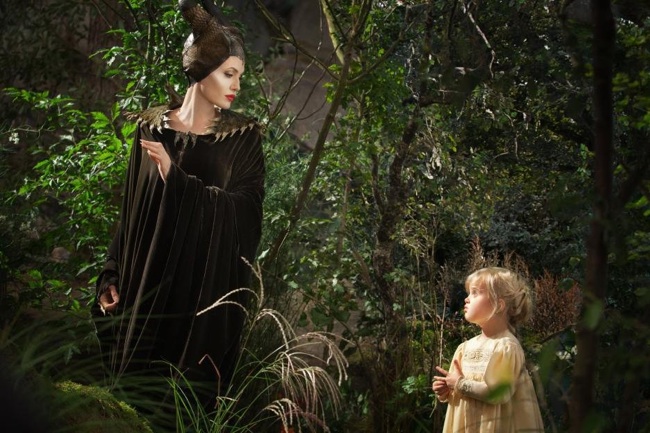 I enjoyed the audacity of a lot of this, to be sure, but I also found myself pulled out of the movie – watching the machinery of revision do its thing instead. But the audience? Enthralled, especially at the various left-turns in the (clearly familiar to them) story. Glamorous, notably-single Maleficent is actually better at taking care of the baby than the “perfect homebody grannies?” Constant laughs. Prince Charming pointing out that it would be more than a little inappropriate to kiss Sleeping Beauty without her consent? Cheers. Vivienne Jolie-Pitt as the younger Aurora meeting Maleficent for the first time? Swoons. That’s the one that made me say “I should probably do a serious re-think on this,” because while “OMG CUTE BABY!!! didn’t really “work” for me as a back-from-the-dark-side moment for Maleficent, I was clearly in the minority.

(Also, possibly anecdotal: Not that it’s something I would’ve previously kept track of, I don’t think I’ve ever heard so many younger female voices shouting variations on “Kick his ass!!!” than I did when Maleficent gets jacked back up to full power just in time for a Boss Fight against Stefan – they wanted blood!)

Digging through film analysis of a more specific variety than straightforward review afterwards and the obvious buzzwords on social media seemed to further confirm what I was sensing: My technical opinion on the film and what it was attempting to do thematically was largely unchanged, but I had rather definitively ignored and minimalized what those attempts would mean to audiences who were, well… not me.

To use the most obvious example: I saw what Angelina Jolie herself many others saw the start of a powerful feature-length meditation on enduring, surviving and moving on from sexual-assault. I saw Disney straining for a Wicked to call their own and winding up with a gonzo dark-fairytale hodgepodge, but to others it’s the (re?)birth of a different kind of iconic Disney woman.

So, was I wrong? In approach, maybe. I’ve never been one to pretend that “X doesn’t work, but Y makes up for it” isn’t a perfectly valid personal summation of a movie; and I probably should’ve taken more time to consider what Maleficent’s “weird” digressions would mean to an audience that would relate to them more viscerally. My criticisms remain, but my opinion as to whether it’s an “important” or likely to be “enduring” film have substantially changed. It’s healthy, in my opinion, to make considerations like this more often.

I’m not re-watching that new Spider-Man again anytime soon, though.