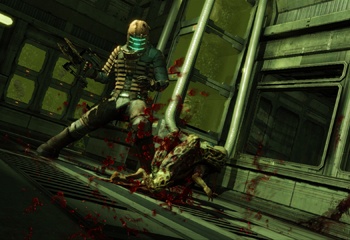 Here they come. Twisted hunks of gristle and entrails shuffle down the corridor toward me, waving long, menacing spikes of bone in my direction. I ready my sawgun.

Just before they’re in striking distance, I send out a blade. It hovers in midair for a brief moment before I begin dragging it across the necromorphs’ joints. Blood spatters, limbs fall to the floor, and the creatures shriek and crumple before me.

Isaac Clarke is a miner by trade, but the derelict spaceship he explores in EA’s recent action horror title Dead Space feels more like a slaughterhouse than an industrial craft. The bodies of the ship’s former inhabitants have been twisted and stretched into frightening meat-and-bone creatures that Clarke must dismember to defeat. Each enemy encounter ends in amputation. It’s a messy, horrible business.

I’m not fond of blood and guts. In fact, I have a fairly weak stomach. I’m the guy that looks away when the intestines come out in zombie films, and I’ll admit I sometimes get a little queasy during television medical dramas. The sight of my own blood makes me lightheaded. You’d think I’d find Dead Space troubling.

But I don’t. And Dead Space isn’t unique in this regard. I’ve played countless hours of gruesome games, and I’m rarely troubled by the carnage they depict. I’m not alone. Most of the gamers I know personally tolerate and even enjoy levels of game gore that they wouldn’t appreciate in other media.

It’d be easy to chalk this lack of queasiness up to simple desensitization. While Dead Space takes videogames’ mutilation fixation to new heights, it’s still covering familiar territory. Graphic dismemberment has been a videogame feature since 1990’s Smash TV. Since then we’ve seen in-game body parts evolve from simple sprite animations into glistening, physics-modeled, realistic gibs. If you’ve been playing shooters for the past few years, you’ve probably shot, hacked up, or blown apart thousands of bodies.

I think there’s more to gamers’ willingness to embrace this level of carnage than familiarity, though. Desensitization to fictional violence is one thing, but enthusiastic participation is another. You’d think that the people who buy and play these games were bloodthirsty, troubled individuals. But they’re not. Despite intermittent public hysteria over violent games, most of us know that you can relish a splattering headshot and still be a well-adjusted, emotionally healthy human being.

Videogame violence indulges morbid curiosity, that undeniable feature of human nature that prompts us to witness and contemplate terrible things. There are few events more horrifying to imagine than the destruction or evisceration of the human body. I would certainly never want to see someone’s head removed with a shotgun blast in real life. In fact, just typing that sentence makes me uneasy. I’d never seek out pictures or video of such an event, even if they were staged recreations. I don’t even like to think about it. I’d like to say I’m not interested in such things. 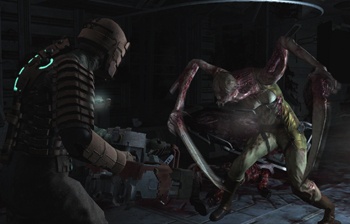 And yet, I am. I know this because I enjoyed Resident Evil 4, one of many hugely popular games that encourages players to engage in shotgun decapitation. I popped hundreds of enemy craniums in that game. It was totally disgusting, and I enjoyed it every time.

Why? What is it about games allows us to engage in such acts without guilt, trauma, or mental anguish? It’s not just their fictional nature. Were that the case, I’d be as enthralled with horror films and literature as I am with Resident Evil 4. But I’m not. I think there’s more to the allure of in-game violence than its artificiality.

If I’m watching an Eli Roth film, or reading a Clive Barker novel, or (god forbid) driving past a terrible traffic accident, the only choice I have in the matter is whether or not to avert my eyes. And, in my case, I’ll usually choose not to look.

In games, by contrast, the violence and disfigurement is perpetrated by me. I pull the trigger in Resident Evil 4. I bring the boot down on my opponent’s head in Gears of War. I launch the rocket at the feet of my enemies in Unreal Tournament. I choose what happens to the digital bodies that these games set before me. The awful and bloody events that result might be the same stuff you’d find in splatterhouse film, but I have a say in how, where, when, and if they occur.

And this is what makes videogames different. They allow us to exercise some measure of control, and in many cases, to feel powerful and important, as we face the fragile, impermanent nature of our own bodies. The acts of violence I engage in while gaming don’t arise from or fuel destructive tendencies. They’re borne of a desire to confront my deepest fears and the most troubling aspects of my own humanity.

And so, as I surgically disassemble gruesome amalgamations of human body parts in Dead Space, I’m not driven by any sort of anger or bloodlust. I’m not indulging in serial killer fantasies, either. Dead Space‘s monsters are the digital embodiment of everything terrifying about mortality. They’re murder and death and pain and disfigurement. They’re marching toward me. They’re my worst fears.

And I’m methodically, gleefully, tearing them to shreds.

Adam LaMosca is a writer and researcher in Portland, Oregon, where he’s currently crushing, incinerating, and electrocuting sackboys with decidedly non-gory results.