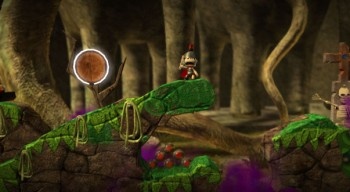 The LaMosca household is hibernating. Over the past week we’ve been driven indoors by arctic temperatures and unusual amounts of frozen precipitation. We have adapted to life indoors by throwing our self-imposed family limits on television viewing, internet surfing, and videogaming out the window. While we’ve spent a lot of time cooking, reading, and cleaning house, I think it’s safe to say that our electronic devices have been key in keeping our cabin fever at bay.

During the daylight hours, we’ve dived back into LittleBigPlanet, taking advantage of a recent patch that allows for much better browsing of community content. And for the past several nights, I’ve spent hours on end experimenting with the level creator. I’m sure I’ve spent a few dozen hours with LittleBigPlanet‘s robust content creation tools since its release. I’ve had a blast, and I’m really pleased with the stuff I’ve built. I’ve grown to think of it as virtual model building.

I feel like the guy who labors at his hobby desk for weeks, meticulously crafting a sailing ship or model airplane. Except I’m fiddling with analog sticks instead of an X-Acto knife, and carving up make-believe materials instead of balsa wood. And, unlike the hobbyist who has something tangible to show for his or her efforts, my accomplishments vanish when I switch off my PlayStation 3.

It’s that last part than bugs me. I can do without the paint-stained fingernails and lingering odor of glue, but I’m kind of troubled by the fact that my creations won’t ever occupy a space in the real world. Even worse, their longevity in the electronic realm is limited. The content I’m building may seem permanent, but I know that my PlayStation 3 will, like my other old consoles, probably end up gathering dust on a closet shelf in a few years.

My LittleBigPlanet accomplishments certainly aren’t unique in this regard. The same concerns could be raised with regard to World of Warcraft characters or Halo 3 Stats or Xbox Live Gamerscores, to name a few examples. We’re gaming in an era of virtual accomplishments that, regardless of how satisfying they may be to obtain and share, are destined to go the way of the Atari 2600.

Thinking such thoughts can provoke an odd sort of anxiety. And it’s not necessarily about wasted time. It’s about lost experiences. Why do some gamers obsessively save, organize, and catalog their gaming collections? Could it be because even unplayed (and sometimes unplayable) game cartridges and discs are tangible, permanent reminders of experiences that were all too fleeting?

I’m better about trading in games than I used to be, but I still own far more than I could possibly replay. I have a few titles I know I’ll never get rid of, not because I’ll play them again, but because seeing their boxes on my shelf reminds me of how much joy they once brought me. I have friends who are the same way with music, or movies, or books. Their crates of LPs or bookshelves of DVDs contain a certain amount of content that they’ll never experience again, but it doesn’t matter. Their mere presence evokes the memories of the original experience.
I suspect the same is true of the various pack-in items that come with special edition releases. I have an Oblivion Septim coin in my desk Like most add-on trinkets, it’s kind of silly, and basically worthless. But I’ve kept it, because it’s a nice reminder of the more than 100 hours I spent in Cyrodiil.

If I ever level a World of Warcraft character over 70, I’ll seriously consider ordering one of those character figurines. I’ve bought player guides after finishing games, just to remind me of what I did and saw. I compulsively grab screenshots to create digital photo albums of my gaming adventures. I think I write about games in large part to transform my own short-lived experiences into something that feels a bit more substantial

But in the end none of this real-world stuff matters. It can’t measure up. A great night of Halo 3 co-op may be an ephemeral pleasure, it’s still far more satisfying than admiring the cat-sized scale model of a Master Chief helmet on your mantle. The pleasure I derive from building make-believe Sackboy vehicles far outweighs the pride I take in surveying my finished creations. Gaming, like all good things in life, is about the doing, not the having.

But I still don’t think I’ll ever trade in my copy of LittleBigPlanet.

Adam LaMosca is a writer, researcher, and gamer in Portland Oregon.