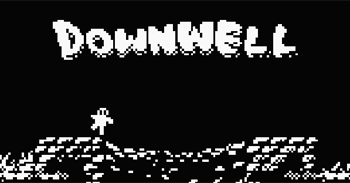 Vertical rogue-like drops to to the small screen

Devolver Digital has released an Android version of Downwell to the Google Play Store. The game is currently available there for $3.

In Downwell, players control a boy trying to find treasure at the bottom of a very deep well, armed only with a pair of gunboots which both fire a projectile and slow the descent. Between the player and the bottom lie thirteen stages across four regions with unique environmental features and a whole lot of enemies.

It’s a very pure game with easy to pick up, three-button mechanics, but has considerable nuance tucked within its combo system, enemy variety, and selection of power-ups made available after each stage. I would have concerns about playing with touch controls (due to accuracy demanded of the player and the game speed) but it does meet mobile criteria for being quick to play with low commitment.

Downwell released first for PC in October and is available on Steam for $2.99. I do recommend it if you like a quick, simple arcade game with some longevity to it.